Jimmy, 65, was born in Lorain, Ohio, but grew up in farm country in Henrietta, Ohio. Jimmy, a Welding Instructor at Tulsa Welding School, Jacksonville campus, has been with TWS for more than eight years.

Thanks for your time, Jimmy. As a kid, what did you want to be when you grew up?

I grew up on a farm. I rode a lot of horses and did a lot of farm work. I always thought at one time I would be a farmer or have something to do with the agricultural business, but that just didn’t pan out.

Talk us through your welding career.

After high school I actually started out at a manufacturing plant with my dad. They made boat rails and ladders, stuff like that, for RVs and boats. That’s where I learned about bending metal. I moved to south Florida in the late 70s and went into carpentry work. I was a nail pounder for a bunch of years. It worked out great, but when interest rates went really high in the mid-eighties, nobody was building.

I came up to Jacksonville to see my sister, and my brother-in-law asked me if I’d like a job at the shipyard. I said, “I’d love a job. I need a job!” I started out as a first-class helper in 1985. I’ve always loved being around boats and on the water. I loved seeing the boats out of the water, where you can see the whole hull. I enjoyed it. I liked working with steel. It wasn’t much different to working with wood, just different cutting tools. So I was a shipfitter for a year or two before I became a welder. Being a fitter, I basically used my same measuring skills to cut steel the same way I’d cut wood. I learned to adapt to working with steel instead and I enjoyed it. It was a little harder, a little dirtier, but I didn’t have a problem with that.

As a shipfitter I watched people weld. I could do little tacks, but I decided I’d like to learn to weld, that was probably late ‘86. I became a fitter/welder, and that’s how I got started in the metal work industry. When I started learning to weld, it got really enjoyable. I settled into a pattern and really got comfortable. 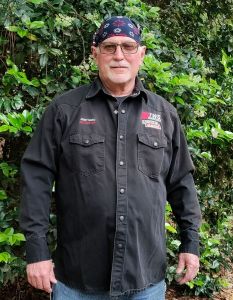 How long did you stay in the shipyard industry?

I stayed working on ships most of my career. I left the shipyard in 1999 and went to another company that did Navy work. I worked on Navy vessels and traveled extensively from 1999 on through 2013 to bases all around the United States. From Providence, RI, to Key West, FL, to Pascagoula, MS, Mobile, AL, all the way out west to San Diego, LA, San Francisco, and Bremerton, WA, on the west coast. I also went to Honolulu, Hawaii. I did work at a power plant for a year when they built a new plant in Jacksonville. That was a little different for me. Everybody told me I’d struggle at it, but actually it was much easier than working on ships. But after a year I got out of it and went back to working on ships and traveling.

I’d been out in Bremerton, WA, for a couple months and I got a phone call from my lead man back here in Jacksonville to say they were closing our shop at Mayport. They wanted me to transfer to Norfolk, VA, and if I didn’t, I was out of a job. I wasn’t going to Norfolk, this is my home, so I figured I’d be unemployed.  Then a friend told me Tulsa Welding School was hiring. He thought I’d make a great instructor, so I talked to Mr. Jack Dulls and I got hired on.

Eight years plus later, what do you enjoy most about teaching?

I like seeing the students’ faces. They can be struggling, struggling, struggling, and then all of a sudden you see their face light up, the light bulb goes on and they’ve got it! They finally figured it out. That’s what I enjoy most. They really get enjoyment out of that moment. “Oh, I’ve got this! I know what I’m doing now!”

Tell us a little about your family.

My wife, Cynthia–well she wasn’t really my wife, but we were together for 25 years–passed away in 2011. We have three kids, 10 grandkids, and three great-grandkids! I’m still not married, although Barbara and I have now been together for almost seven years.

There’s a whole bunch of stuff. I don’t extend my personal information out a lot. Probably the biggest thing that most people don’t know is that my dad immigrated to the U.S. from Sicily when he was eight years old, so I’m a second-generation Sicilian. The other big thing is that I hitchhiked from Lorain, OH, to Fort Myers Beach, FL, when I was 21. I wouldn’t recommend doing it now, but back then it wasn’t quite so bad.

I would definitely say the actor/director Mel Brooks because I would love to see what makes that mind tick. He picked on everybody. He left nobody out.

Having spent most of your career working on ships, what did you enjoy most about that?

I would probably come home and see if Mrs. wanted to go ride motorcycles or go fishing, one of the two.

I teach mostly Phase 101 – Introduction to Welding – so I’m very familiar with that advice. My biggest advice to somebody about to start or who has just started is to take it seriously. You have to be serious. It’s something that you are planning to do for the rest of your life, so you have to really take it seriously. Be prepared to put the effort in. If you don’t put the effort in, you’re not going to get anything out of it.

My dad taught me the qualities of being responsible and taking your job seriously. He worked at the same place for 14 years and never missed a day. He was very serious about going to work and he instilled that work ethic in me. I take my job very seriously, so that’s what students should also do. Treat school like a job. That’s what you’re preparing yourself for after all.

I see so many students that just show up and go through the motions. They don’t take it seriously. If you’re going to spend the money, put the effort into it and you’re going to get a lot out of it. Welding is a skill. If you don’t do the practice, you don’t develop the skill. A lot of people in Phase one think, “Oh, I can’t do this.” Well, yeah, you can do this, but you’ve got to practice. You can do it, but you just can’t do it yet!

It would have to be my brother-in-law, Joseph Yakunovich. He basically got me into the steel industry. He was my lead man for a number of years. He didn’t make it easy on me. He made it harder on me to make me improve. The sad part about it is he was killed in a car wreck going to work on my birthday in 2007. He was my inspiration, my mentor. He taught me everything. He helped me move up the ladder. I was pushing crews, running crews. He did everything for me, but he also expected a lot out of me.