Tyler, 29, from Monticello near Decatur, Illinois, graduated the nine-month Electro-Mechanical Technologies program at Tulsa Welding School in Jacksonville in May 2022.

Thanks for your time, Tyler. What did you do before coming to Tulsa Welding School?

After I graduated high school, like most kids I didn’t know what I wanted to do. My counselors tried to push me toward university, but my family just didn’t have the money to send me to college. So, my dad was like, “You’ve got to find a job to pay for things that you want to do.” Long story short, because I’d taken an auto technical course in my senior year in high school, I went to work at a Ford dealership. I spent about four years there, then I realized there weren’t a lot of jobs in Decatur, Illinois, other than a foundry and a Caterpillar factory that eventually closed and went to China. A buddy worked at the foundry, and I remember him coming home every night, exhausted and dirty; it wasn’t what I wanted to do.

I had a higher calling if you will, to serve my country. So, I joined the Navy in late 2015. I actually completed the entry program on my 23rd birthday and I was like, “Wow, I’m in the Navy now!” I served five and a half years working as a mechanic on fueling equipment for Navy aircraft. It was a technical job; getting deployed to some pretty tough areas was another challenging aspect.

So, as your Navy tour came to an end last year, what brought you to HVAC school?

I just remember my dad saying throughout high school, “Hey, you should probably look into HVAC, it’d probably be a good career. Guys get paid pretty good money to do that.” I took it how most kids take advice from their parents at that age. You know how it is as a teenager, “What does this guy know?”

So, I wasn’t interested in it then, but probably a year before I got out of the Navy, I started to really see the end in sight. I had to do something. So, I ended up doing some research and, lo and behold, found Tulsa Welding School. TWS was my first choice because it was conveniently located here in Jacksonville.

You were living in Jacksonville then?

I met my girlfriend down here in Jacksonville, so although we got moved up to Norfolk, VA, I decided that Jacksonville was going to be home. I did my career and college search down here. I actually enrolled in TWS from Virginia, and then as soon as I moved in down here in August, I started hitting the books hard.

Thank you for your service. So, you finally followed you dad’s advice huh?

Kind of! I had a pretty good mechanical background from my time at Ford and in the Navy. I liked putting my hands on things and learning how to fix stuff. I enjoyed learning how each of the components worked, so you can kind of see how this career would fit. It was also a confidence thing. I’m obviously very comfortable with hands-on work, but I’d never worked on an A/C system. So, in my mind, I was just thinking it’s just another system I have to relearn. I knew I had to keep my ears and my mind open to learning new things. So that’s how I got comfortable with the decision to go back to school. But coming out of the Navy, it seemed like I went a long way to come back to something my dad had mentioned 12 years before!

Is your dad gloating a little, “See, I told you so”?

A little, but he’s just happy that I had a plan. I think that was the main thing.

That’s a tough one. To sum it up I’d say a combination of two things. First the people I met there – I met a lot of interesting people; I had a lot of good conversations and am still friends with them to this day. Second, the hands-on aspect of the program because that’s how I learn best. Being able to get up to the boards they have and put your hands on things, to see how they operate once you set them up. Getting to deal with electricity for the first time in my life and actually figuring components out was awesome.

How did you find the EMT program with your technical background?

I’m not perfect, so I definitely had some struggles. I remember it took me a long time to figure out four-way switches! It’s very humbling in class when everybody else is getting something and your mind is like, “What am I missing? Where that little piece that they unlocked? Why can’t I get this yet?” It definitely took me coming home and drawing it out several times to try to get it down. I’ll never forget coming into class the next day for one of our finals. I ended up getting it and the teacher was just like, “Hey, it looks like you got it!”, so I gave myself a pat on the back for that one. I just persevered.

Good for you. So, where are you working?

Let me kick it back to about March; we’re all trying to figure out who we are going to go work for. The school is pretty good about getting employers to come in and have them talk to students, but nothing was biting for me really. This is where I’m going to say my dad wasn’t completely right!

Going through the EMT program, I found out pretty quick that HVAC was probably something I didn’t want to do. It wasn’t anything the school was doing. It was mostly that I just wasn’t interested in it. But I did like the electrical aspect. So, my buddy at school told me his neighbor works for this company and I should Google them. So, I did, but this other company called Ecolab pops up. I’d never heard of them, but I got on their website and looked at their careers page.

This role called Territory Service & Sales Representative came up here in Jacksonville. It’s basically a sales and service job. So, reading it online, I was still confused by what the company did, but reading the fine print it clearly had a technical side to it. It said you must have a mechanical background and some electrical knowledge. That was perfect for me; so, I applied and got the job. Three months on and I’m about to finish my training; I have a final test tomorrow. It’s a very extensive training program.

Your experience at TWS was useful then?

Going through the EMT program definitely gave me the knowledge and the skillset to be able to apply myself in the training program. It was a good foundation, and I’m using the multi-meter the school gave me quite often! I know one of my teachers will be pretty happy to hear that! I’m testing circuits, I’m making sure contactors are working, and that capacitors and sensors are doing their job.

So, tell us more about the role?

Sales is just a little bit of the role really. Think about your Chili’s or Regency Hotels. They have a kitchen, a laundry, the hotel has a pool. We deal with all that equipment. I’m not a pool guy per se, but we have equipment that basically monitors the chlorine and alkalinity levels in the pool. So, as you can imagine, there’s electricity to all that equipment. Being able to diagnose issues on maybe why the controller isn’t working properly, for example, having that background knowledge really has carried me a long way in this role already. In Chili’s for example, their kitchen uses our dish washing equipment. So, I basically service that equipment making sure that customers are getting clean dishes. 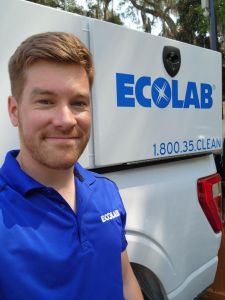 It’s kind of a lost art, but one of the guys on my team has been with Ecolab for 34 years. You don’t see that much these days, and next year the company turns 100 years old, so that’s saying something too. I definitely foresee a future for me here. There’s a lot of opportunity for advancement. My district manager has only been with the company for six years, but he started where I am, and he’s moved his way up. I think it was like three or four years after doing my role that he got promoted. But I’m also studying to be a pilot too, so I don’t know what the future holds. I’d like to take that as far as I can go too.

I guess what keeps drawing me into these career paths, like my time in the Navy, is every day is different. I’m not going to wake up and then go to a little cubicle and work a nine to five every day. Every day there’s going to be something new that’s going to challenge me out there, and by overcoming those challenges I’m going to add experience to my playbook of knowledge. That’s what really intrigues me.

Are you happy with where you’ve started financially?

I’ll say that I’m definitely getting paid above average! The company did take into account my mechanical knowledge, so they definitely gave me a better pay rate than standard. I guess two roles above me, two  rungs to climb, and I’m making six figures.

Thinking back to where you were, things have turned out well?

I look back and I had a lot of challenges at the beginning of this year. I didn’t have a job and I was struggling for a while. I couldn’t find a job that suited me. I applied to quite a few places and had to go as far as drawing unemployment. That’s one of those things that humbles you, you know. But you’ve got to be a self-motivator to get out there and do something. So, all in all, I’ll just say I’m blessed to have the people that I have around me, the people I went through school with, and to be where I’m at today. It’s just really nice to be able to kind of look back at five/six months ago and realize where I was at then, and where I am at now. That, in itself, is a humbling experience. So yeah, I’m truly blessed to be where I’m at now.