Travis, 31, born and raised in Houston, Texas, graduated from the Welding Specialist program at Tulsa Welding School & Technology Center in Houston in July 2018.

Thanks for sharing your story, Travis. Tell us what you did before welding school.

I went to college and got my associate degree. Even then I realized I needed to get a trade, but it didn’t happen. I was into music. I’m a singer and a drummer, so I did shows around the Houston area for a while. Then I started working for the Port of Houston. I started pipefitting. I was just trying different things that would excite me, to see what I’d like to do. That’s why I started pipefitting. I did that for a little bit.

What made you take up welding?

One day, work was a little slow, so I went to a friend’s house. Justin put a welding stinger in my hand. I kid you not, I got there at noon and we welded until 3 a.m.! I did not even realize the time; I was having a lot of fun. Justin told me that he couldn’t weld like I did the first time he tried. He said I was pretty good and maybe had a thing for it! That’s when I realized I wanted to be a welder. I’d seen welders while I was pipefitting, so there was some interest there, but that day changed my life. And going to welding school gave me the tools to feed my family.

Did you work while at welding school?

Yes. About a month and a half after I started, I landed a stick welding job at a scrapyard. Going to welding school helped me get that welding position because I actually went in as a laborer. I told the guys I was going to welding school, and after a while they let me weld a little. They saw I was pretty good and offered me a welding job. I started at $16 an hour and made my way to $20. A lot of guys might not experience that feeling until after graduation, but I was blessed to get that welding job. That was hard in itself, even though it was a perk.

Why was that hard?

I have a wife Ashley and three beautiful young kids – aged three, two, and almost one – and I’m the only one working a job. I worked Monday through Saturday 7 a.m. to 5 p.m., and then went to school at night Monday through Friday. I got up before 5 a.m for work, then after work I had to drive south to north across Houston for class from 6:30 p.m. to midnight. The only time I would see my kids was the weekend, because when I got up and when I got home at 1 a.m., they were asleep.

Did you ever consider quitting?

I knew it was a sacrifice, and at times I wanted to quit, I really did. I was so tired. But I got some words of wisdom from my friend Justin. He didn’t go to school, but he could weld, and he would just tell me to keep on going, just keep on going. So that’s what I did, because I knew it was bigger than me. Like I said, I have a family, so I knew if I stopped, I wouldn’t just be letting myself down, I would be letting them down. Welding was how I was going to feed my family.

The instructors really wanted you to make it. Some of them would literally hold our hands and guide us as we were welding, showing us what we needed to do. Some of them just would not leave us alone! They’d come in your booth and ask how it’s going. Sometimes it was kind of irritating, you know, but you are thankful for them. They would share their stories about how some of them were sleeping in a car before becoming welders. Now their education has gone even further – instructor, master welder, inspectors. My classmates helped, too. We would help each other out, so that was pretty cool in itself.

Where are you working? 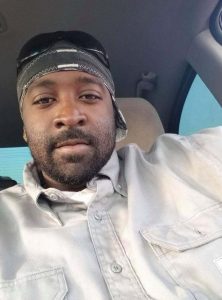 I worked at the scrapyard until after I finished school. Then I went back to work at the Port of Houston, but this time as a vessel welder. I started that job in January of this year.

Are you happy with the money you are making?

I have to say since I started welding, as far as the hourly money goes, I haven’t experienced more money in my life. This was the best career decision I ever made. What I make now depends on what dock I’m working at; it varies from $25 to $30. It depends on the job. It’s a union job, and because I have a skill, they always need welders. I’m saving up right now for a house. I’m going to get a house built.

I’d like to go on the pipeline for a while and then one day own my own business. I have a welding friend who lands contracts building staircases and stuff like that. He has a couple of guys working for him and does about three jobs a day, and each job is about $1800. But first I want to get to the pipeline. That will get me a lot of experience.

Are you okay with the travel and being away from home with a young family?

My wife is onboard with it, and the kids will need to learn that this is how Daddy makes his money. I’m pushing to be done with pipeline by age 40 or 45. I want to give it a good hard 10 years on the pipeline; that’s what I’m working on getting to right now. Then I’ll come back home and start my own business.

You know how you start noticing things? Like when you buy a car you really like, you start seeing that same car on the road without looking for it. When I started welding, I started paying attention to all the things that are welded. So that’s cool, and I also really enjoy building something.

I’m in touch with a good three or four classmates. One guy called me about a month ago to go to the pipeline, but I told him that they are treating me pretty good at the port, and I’m home. After the sacrifice of school, I want some time with the family and to come home every day. It was really hard not being able to spend time with them while going to school, so I want to give it a little more time before I go out there. But when the next pipeline opportunity arises, I’m sure I’ll take it.

What advice would you give to new students for them to be successful at TWS?

Don’t quit! Keep on going. Always come to class. Keep your breaks to 15 minutes and then go back and hit it hard. Don’t take it for granted. I knew a couple of guys that were very good welders and scored very high, but they were unable to graduate because they didn’t have enough hours. They didn’t come to class.