Amber, 35, from Houston, Texas, graduated from the Welding Specialist program at Tulsa Welding School & Technology Center in Houston in January 2020. A mom of three, Amber had never touched a welding machine before coming to school.

Thanks for your time, Amber. Tell us what you did after high school.

I became a mom at 20. I never got to college. I tried to do it online, but it’s complicated with little kids. So I just started working.

What brought you to welding school? Did you have any experience?

I worked in a pump shop. They rebuilt pumps for the water and energy fields. I did shipping and receiving, purchasing, was a fork lift operator, managed the shop. I worked with the guys, so I was around welding. I knew a little bit about it, although I never tried it. I used to buy a lot of the supplies they needed. I got laid off in 2016 and haven’t been able to find a stable position since. I’ve been working, but nowhere long term. I knew I needed to do something because I didn’t have a direction.

Why did you decide on welding?

At first, it was first the stability it offered. I looked into it to see if I really would be interested. I like working with my hands, and I’m pretty mechanical. I researched it, thought about it, then with my fiancé’s encouragement, I thought why don’t I just do it instead of thinking about it? I wasn’t working, so I jumped in! As I went through the program, I learned about the opportunities within welding, so now I have a plan. Hopefully I can make that plan happen. 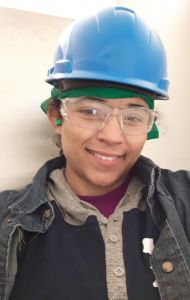 In five years I can become a CWI [Certified Weld Inspector]. I’ll be honest with you, I wanted to get out of the labor field after my time in the shop. But I figure, in five years, once I have experience, I could get into inspections. Then I won’t have to actually weld every day unless I have to.

I liked the instructors and how fast the program was. That’s the main reason I decided to go, because it was only seven months. I found it hard to believe that I’d learn anything in just five weeks per class, but I did. You learn to appreciate the instructors and that they’re actually teaching you. Getting to know all the different people in class was very good, too. There were all ages from fresh out of high school, to older than me. It was a nice variety of people, and we helped each other out. You might be better at a type of welding than someone else, but they might be better than you at something. We would exchange notes and tips. It was nice.

Did you have any reservations about going back to school in your mid-30s?

When I first got there and saw how many kids there were, yes! But when I got into it and I saw how many people of different ages were there, it was alright. I actually mentored some of the younger guys and girls. I’d tell them to keep pushing, don’t quit, to not get frustrated. It was good.

Did you have any issues at all as a woman in a male-dominated environment?

No, it was actually pretty good. There wasn’t any negativity. There were actually a lot of women there.

You finished your final class just this morning, and you start work next week. Is that right?

Yes, I start with Watco on Thursday. For now it’s a non-welding railcar repairman position. But they’re going to do a review after 90 days and hopefully I’ll get a welding position. I’ve got goals and a plan now. Before Tulsa, I didn’t know where I was going.

My Career Services Advisor Jakis started sending me opportunities two/three weeks ago. But a lot of it was out of town. I told him: “I’ve got three kids; I can’t just move to a different place right now. Can you find me something local?” He sent me Watco. It took me about a week and a half to apply because I’m running around all the time, but they called me back fairly quickly. I was surprised.

What was the interview process?

I did a phone interview with a recruiter, and then they called me in for an in-person interview. When I got there, it was with two guys. They asked me questions, I told them about my experience, what I know. Often you can’t tell if they’re interested in hiring you or not. They were friendly, but they didn’t really lean one way or another. I was like, “Okay, we’ll see.” Then I got a call back, and here I am! 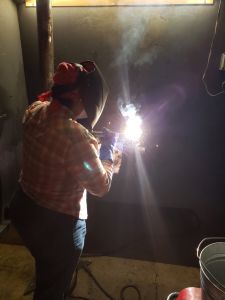 You want to move into inspections. Do you plan on doing that with Watco?

Yes. They like to hire and promote from within. So I’ll probably stay here as long as I can and move up, eventually to an inspector.

Are you happy with the money they are starting you on?

Yeah, it’s a good starting point. There were other jobs that wanted me to start way lower, and they were welding jobs. I’m not even welding yet. After three months when they review me, I could possibly get a raise and a welding position. They do have good benefits here; they have a 401k that you can get into. It’s somewhere you can stay. My supervisor has been here for nine years.

Do you like the creative part too? Building stuff?

Yes, I look forward to being a part of that. When they took me around the shop, working on rail cars looked very interesting. They showed me some damaged ones. What I will be doing is important. It’s for safety. You’re a part of that safety process. If your weld is not good, then the car won’t be safe for someone else to work with. You have to value what you do and take pride in your work in order to benefit someone else. You feel important. You’re a part of something.

I made some friends. I even made friends with a few teachers. I hope we can stay friends throughout the years because of the trade. It’s been a very cool experience for me to become part of it.

What advice would you give to students for them to be successful at TWS?

My main advice is not to quit. Your money’s already in it. You have to pay it off anyway, so you might as well finish. So many people don’t go and just weld. They just hang out, doing whatever, not taking care of their business in the booth. I never understood that. Stay in the booth. If you don’t have to take a break, don’t take a break. I didn’t take breaks unless I absolutely had to. Just don’t give up, don’t stop welding and don’t quit. That’s my advice.