Derrick, 46, from New Orleans, Louisiana, is a Senior Welding Instructor at the Tulsa Welding School & Technology Center in Houston. He and his family left Louisiana for Texas after Hurricane Katrina in 2005. Derrick has been at TWSTC for about five and a half years and has been welding since 2008.

Thanks for your time, Derrick. What did you do before you found welding?

I started welding in my early 30s. At that time, I was already married with kids, I had a mortgage, a car note, grown-up stuff like that. Basically, I did any job that would pay me money to be able to pay my bills. I did anything from manufacturing—on the welding side—to warehousing. I’ve been a crane operator. I drove forklifts. I did restaurant work.

Many of our students have a similar story. So, what brought you to welding?

I’d done nothing you would consider a career until I found welding. That’s what I was looking for: a career. I wanted to do something I could be proud of and where I could make more money. I needed something that didn’t have the financial ceiling that I’d been encountering. There’s only so much you’re going to get paid in a restaurant, a warehouse, or driving forklifts. So, I went to welding school in 2008.

What kind of welding work did you do in your career?

Mainly fab shop work. Fab shop work can be placed in different categories. For instance, you have your structural shops where you’re building things like oil field equipment, cell phone towers, drilling platforms, ships, or you can go to the pipe side of fabricating where you’re actually welding all stress joints, risers, pressurized piping. Anything that can have some type of fluid or gas running through it.

When you were a kid, what did you want to do when you grew up?

I wanted to be in the Air Force and fly those fighter jets. I just wanted to be up in the air! Then as I got older, I got into sports and forgot all about that!

So, after almost a decade welding, what made you decide to go into teaching?

The company I was welding at got bought out. I had a little money saved up and with the severance money I got, I figured I’d try to open up my own business, a mobile car wash. I was going to get a pressure washer and a whole unit, you know, with a trailer. I was trying to venture off and do my own thing. I won’t say I wasn’t successful, but it took more money to set-up than I thought. When I realized my money was getting a little low, I knew I had to go back to old faithful, which was welding. 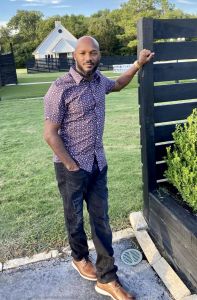 I got online, filled out some apps, got my TWIC® card (Transportation Worker Identification Credential) because I was willing to travel. I was ready to go anywhere that was going to pay me the big dollars. I’d made anywhere from $20 to $30 an hour local, but I was ready for the big money that people talk about on the road, then I saw the posting for a welding instructor.

And that changed your mind? Because everyone knows that teaching isn’t “big money”!

When you have a family, you want to provide for that family financially, emotionally, and mentally. It’s not the big money I would have made traveling, but I thought I’m going to be able to make decent money and go home to my family every night. That was the clincher. The more I thought about it, the more I realized I wanted to be there for my family like I had been before. There’s a price to pay for stability.

It allows you to change somebody’s life. I look back at what welding has done for me. How it took me from obscurity, as far as my career is concerned, and gave me a career to be proud of. I’m doing the same for others that welding did for me by sharing my passion and helping them develop skills to be proud of. As I got older, I realized that I wanted to do something significant that would affect other people’s lives, or just help people. Teaching students who are seeking the knowledge I can share, who want something better for themselves, I feel like teaching is my calling. It’s my positive contribution and duty to the world.

People probably won’t know that I was an all-state football player in high school at the safety position. Also, I was a two-way starter from my sophomore year (fullback).

Tell us about your family, Derrick.

My wife and I have been married 20 years this September. I have five kids. Four girls, one boy. I also have five grandkids actually. I started making kids at a young age, made my momma a grandmother young, so my kids just gave me a dose of my own medicine!

What advice do you have for new students just starting out at TWS?

Repetition. Get in a booth and weld. Ask questions. Do the weld that you are working on over and over and over again. The only way to get this is to repeat it constantly; practice make perfect. My mantra is, “Ask Questions. Burn Rods.”

If you could choose to have dinner with anyone, alive or dead, who would that be.

I would go with Dr. Martin Luther King Jr. I have the utmost respect and admiration for a man that can have that much self-control and that much discipline to stand up to a system that only wanted to eliminate him, without trying to strike back in a violent way. I also have the utmost respect for him as an orator; not only was he a great speaker but he backed every word up with his actions.

You get an unexpected afternoon off, what would you do with that time?

I probably would get out and ride on my four-wheeler. Maybe take the side-by-side out and drive really fast over some dirt! I also really enjoy watching reality-based sci-fi movies, so you may find me on the couch as well!

What was your favorite part of the welding industry?

Seeing a project all the way through; just starting off with insignificant parts on pallets, putting those parts together, welding those parts out, and completing a job. I also enjoyed the pride and sense of accomplishment that I felt in passing x-ray and ultrasonic tests. In the fab shops I worked in, when you complete a weld, you’re the guy that’s going to set up your pipe to be tested by the NDT inspectors. When those results come back and your weld passes, that’s the stamp that says you know what you’re doing. That was probably what I liked most about being in the field. I’m a competitive guy, I like competition. So, when I was able to pass a test that other people may have failed or finish a job my boss thought I wasn’t going to complete, there’s just a sense of pride in that. I feel like a winner!

What was your favorite tool of the trade when you worked in the field?

I won’t say a certain tool, but what I liked to use the most was the overhead cranes, the kind that sit on rails and run from one side of the shop to the other. That was probably my favorite thing to do, just operate the cranes to maneuver large, heavy pieces so we could weld on or under them. We would sometimes weld on extreme projects where we would have to hook up two overhead cranes because the weldment was so heavy. I actually controlled two overhead cranes at the same time; one with my right hand and one with my left, working those simultaneously to get the job done. It was kind of like playing a game, like Xbox or PlayStation, but with serious consequences! Those overhead cranes in fab shops can lift anywhere from five  to 25 tons.

If you could tell anyone “Thank you” for helping you become who you are today who would that be?

I’ve already told this person, thank you, many times. I’ll go with my dad, Larry. He showed me what hard work is, he showed me what discipline was. He was always trying new things, like businesses. He’s always just trying to be the best man he can be. He introduced me to religion and spirituality. He always challenged me mentally to do different things. He gave me my love for music, I mean he gave just a little bit of everything, I guess.