To give you insight into the kinds of companies that recruit TWS graduates, we spoke with Morgen Beams, Quality Manager with Trident Process Systems in Gainesville, Texas.

Thanks for your time, Morgen. Before we start, please tell us a little about your background.

I’ve been with Trident Process Systems a little over a year and a half. I’ve been in the industry since 2012 and I have an Engineering degree with a mechanical concentration. My role here is managing a team of inspectors who make sure that everything we make is up to code and of the highest quality.

Please give us a brief overview of Trident Process Systems.

We are a fabrication company that provides single source engineering, design and fabrication of ASME Code process equipment, B31.3 piping skids and environmental solutions for energy industry customers. We provide engineered skidded packages, vessels, piping and structural skids to the production and midstream sectors. We have over 130,000 square feet of fabrication space set up for streamlined manufacturing. We safely provide on-time, high-quality solutions to customers with the customer service they deserve.

Your Gainesville location sits between the Tulsa and Houston campuses. Where do you recruit from?

We have been consistently working with the Tulsa campus for a little over a year now. I’ve been to the Houston facility a couple of times, but we use a slightly different welding process than those taught at Tulsa Welding School. The Tulsa campus has the machines we need to be able to test welders in our process, but we are trying to get those machines into Houston as well. We also hope to have our process taught in their welding programs, but we are still working with them on that.

What welding process do you use?

The welding process we use is metal-cored. It’s kind of a hybrid of flux-core and MIG that students are taught in school. We use MIG for all our root passes, but probably 90% of our welding is metal-core.

Does the hands-on practice that students get at TWS give them an advantage learning that process?

You can see how the hands-on training helps students excel and adapt. When they sign up to take our weld test, they practice and practice. When they pass the test, you can tell that the hands-on training they got learning MIG and flux-core really paid off. I can see which students really put in the time and effort, not just practicing for the test but also in school. I can see those who really understand, and those who are winging it. There’s a stand-out difference between those who work at it and those who fly by the seat of their pants.

What first convinced Trident to give TWS graduates a chance to impress?

I’m not 100% sure, but I think Tulsa reached out to us for employment verification because we had hired a few graduates. The conversation evolved into an invitation to attend a career fair. That’s kind of how the relationship started; we attended a quarterly job fair after a graduation weekend last year.

What is your recruitment process?

I give the career services team our needs, kind of an employment outlook about four weeks ahead of my campus visit. They spend a week or two putting together a list of their top recruits. They put up our flyer on campus, talk with Phase 8/9/10 students who might be interested, specifically students who are graduating two weeks before or after weld test day. The candidates start practicing for the test, hopefully a week or two prior to test day.

We provide the school everything they need, and we have one or two instructors who go through the process and review the welds. We’ve been honing our process. We now don’t allow students to test unless they’ve practiced with an instructor. 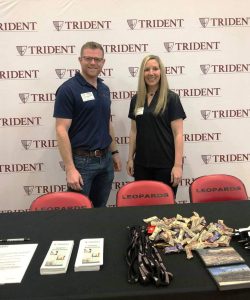 Then on weld test day?

I meet with the candidates informally, often as a group while they are waiting to weld test. I ask them about their career plans, and answer their questions. I talk to them about the company. Afterwards I bring their weld tests back here where we bend and break them to determine if they pass or fail. I then let career services know who passed. Then I hand-off to Ashley, our office manager, and bounce between her and career services to learn who is choosing to accept our offer.

How many students do you test and/or hire?

It depends on how many show up. Sometimes we test six students on the low-end, twelve on the high-end. When I go to campus we are usually looking to hire as many welders as possible. We just added a 20,000sf building earlier this year, so that freed up another 20 to 40 welding bays. Now it’s a question of finding the customers to fill that capacity, and that would drive our next phase of recruitment.

How many TWS grads have you hired?

What makes TWS graduates stand out when you are looking to recruit?

Their commitment level. If a student is willing to dedicate eight to ten months of their life to go through the entire program and is willing to spend the money, they are showing a commitment and dedication to this career path. One of the things that stands out from the graduates I’ve hired recently is their eagerness to get into the industry and learn, to take this opportunity and make it work. They take the fundamentals they learned in school and implement them in a real-world atmosphere where they are actually building real things. We build ASME pressure vessels to section 8 code. When students get hired on here, they are building things that they would never have been able to build at school.

What kind of qualities do you notice in the TWS graduates who go to work for you?

One quality that stands out is the mentality to keep their head down and get to work. They seem to have a hunger to learn and get after it, to attack the opportunity. They come in with a focus and a determination to succeed at what they’re doing.

Does Trident have a formal training program?

We have a mentorship/shadowing stage that typically runs about two to four weeks. The time depends on the product—whether it’s pipe or pressure vessels—and it’s kind of tailored to the graduate. If they are ahead of the game and catch on really fast, then great, but if they don’t, we will work with them and give them an extra week to build another vessel, to learn our drawings. There is so much more to building a vessel than what they technically learn in school. We want them to succeed. My inspectors do a really good job of carrying that mentorship over, and teaching them different things.

Do you have an example of a TWS graduate who has moved up through the ranks?

Jay, our pipe shop supervisor, is a Tulsa Welding School graduate. He was one of the first five welders to be hired on here about four years ago, just after the company opened. He has grown up through the ranks. We only have three supervisor positions and three manager positions for the entire shop, and we run about 110-130 employees total. Jay had a few years’ experience out in the field when he came to us.

What advice do you have for students to be successful at TWS and to have a chance of getting hired on at a company like Trident?

The biggest thing is understanding that you’re never going to stop learning. Build that desire to learn because learning doesn’t stop when you graduate TWS. It doesn’t stop when you’ve been in the industry 30 years. There is always something new out there, something to learn. That desire is going to help you move forward and be successful in life. You can’t fly by the seat of your pants, get a certificate from TWS and claim to be a welder, because you’re not going to pass this or many other weld tests. You might think you’re a welder, but if you’re not prepared to keep learning, you’re not.