Remember learning about the New Deal in history class? It’s how President Franklin D. Roosevelt gave Americans jobs and the country’s infrastructure a makeover during the Great Depression.[1]

Inspired by the success of that program, legislators today are proposing a “Green New Deal” to create jobs while combating climate change. Specifically, the program could create thousands of jobs for those with the electrician training to install wiring and solar panels, as well as other tradespeople in the clean energy sector.

Despite its appealing promise, the construction industry, unions and workers aren’t uniformly embracing the Green New Deal—and they’re not the only ones.[2]

Learn more about the proposal, its potential impact on the skilled trades careers and industry, as well as obstacles to passing it in this article.

What Is the Green New Deal?

A proposed 10-year plan to help move the country to 100 percent renewable and zero-emission energy sources while guaranteeing a job with benefits and health care to every American.[3]

The deal calls for transforming America’s power and transportation systems: from fossil fuels to wind and solar energy and from networks of highways to high-speed rail lines.[4]

Importantly, the deal would be a nonbinding resolution. If passed, it wouldn’t mandate the proposed changes but rather confirm government approval for such programs in the future.[5]

How the Green New Deal Could Affect Skilled Trades Workers 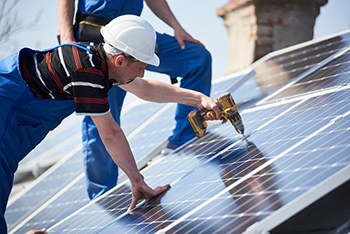 Solar, wind and other forms of renewable energy currently account for just 17 percent of the clean energy produced in the U.S. electricity sector. Shifting to 100 percent clean energy within 10 years could quickly increase demand for skilled trades workers to construct and wire wind turbines, solar photovoltaic systems and other structures that generate renewable energy.

Even the legislators behind the proposed Green New Deal admit the country doesn’t have all of the workers with the right technical skills right now to start these projects. Rather, if passed, the deal would serve as a “guidepost for an array of policies Congress would need to transform the U.S. workforce.”[6]

For workers in need of new careers, the Green New Deal could provide opportunities to enter the skilled trades by creating thousands of jobs for wind turbine welders, electricians, solar panel technicians and other green collar tradespeople.

Given the skilled trades shortage, the deal could overload the already understaffed construction industry, raising wages for those with the right training.[7]

Etablished skilled trades workers might find the kinds of jobs created under the Green New Deal less appealing, especially those who would have to give up lucrative positions in the natural gas and coal industries.

“The construction jobs are predominantly good-paying, unionized jobs on the commercial side. However, much of the residential work would initially be lower-paying, lacking strong wage floor protections and the right to unionize. Local hiring provisions would also increase the number of local jobs created,” said Todd Vachon, a researcher at Rutgers School of Management and Labor Relations, of the Green New Deal.[8]

Other Opponents of the Green New Deal

The Green New Deal’s opponents aren’t confined to the construction industry either. With their large presence in the natural gas and oil industries, unions have been hesitant to support the proposal.[9]

Republicans have called it “a costly and completely unrealistic dash away from fossil fuels.” And there’s little chance the Republican-controlled Senate would greenlight the bill.

“Where we need to be targeting really is a net-zero carbon economy by about 2050, which itself is an enormous challenge and will require reductions in carbon emissions much faster than have been achieved historically. 2030 might be a little bit early to be targeting,” remarked Jesse Jenkins, a postdoctoral environmental fellow at Harvard’s Kennedy School.[10]

The Future for Green Jobs in the Skilled Trades

With its somewhat utopian goals and bevy of opponents, it’s unlikely the Green New Deal would pass. Even if it did, the deal wouldn’t directly create the programs necessary to fund its big-budget projects or to train American’s workforce for green jobs.

But the proposal does reflect mounting interest in the government for the country to transition away from its heavy reliance on fossil fuels to renewable energy.

This means we could see additional clean energy initiatives in the future and, with them, more green jobs for skilled trades workers.