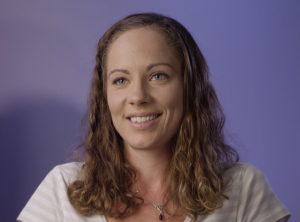 Katryn, 29, originally from New Hampshire, was working in a nursing home before she got a call from her brother that would change her life.

“My brother was stationed here in Jacksonville. After he completed his time in the Navy, he decided to come to Tulsa Welding School. He called and told me that he thought I’d really like it. It was a very quick decision. I quit my job, drove my Nissan Ultima down here with my father, and started at Tulsa Welding School two weeks later! It was a huge life change!”

Katryn and her brother are very close. Even though he’d been gone for a while being in the military, she trusted his judgment that welding school would be a good fit for her because he knows what she likes.

“It’s very hands-on, very physical, and the artistic aspect is something he thought I’d like. He knew I’d be drawn to something physical, definitely not something sat at a desk. I’m not up for a ‘cube farm’ kind of life! I just wanted to give it a shot. Really, I thought it would be foolish to pass it up. Plus, I was unhappy in my other job, and it was a perfect opportunity to make a change. It worked out great!”

It did work out. Katryn successfully graduated the Professional Welder with Pipefitting program at the Jacksonville campus in November 2016.

From Nursing Assistant to Welder

When she took that call from her brother, Katryn was working as a Licensed Nursing Assistant in a long-term care nursing home; she’d been there for six years. She was 28, and she’d been in New Hampshire her entire life and was ready to move out of her comfort zone in every sense of the word.

“I was working with very sick people. It was very fulfilling, very rewarding, but it was sad at the same time. Welding is fulfilling and rewarding because you’re able to accomplish this thing that you’ve been fighting with all week…and then you get it! When you go to your instructor and tell him – “I got it, Man!” and he says, “Look at you! I’m so proud of you!” – that is a completely different level of success and fulfillment that I’d never had, and I love it! It’s awesome.”

A Novice with Zero Experience

Katryn didn’t grow up around welding. Other than an uncle, she didn’t know anyone who welded. Her uncle gave her a little taste of welding just before she left for Jacksonville!

“I had no idea what I was getting myself into! I’d welded once in my uncle’s backyard about three days before I left. Everyone was like, “What? She’s going to welding school? That’s so cool!” I’m kind of famous.”

Katryn knew nothing about Tulsa Welding School other than what her brother told her.

“I looked at some trade schools locally, but there was nothing with that amount of time under the hood. I mean the after-school availability is awesome. You get a lot done in the five hours of a school day, but you can also really struggle. So you can stay around and practice; nobody bothers you, the instructors are there to help. It’s awesome. That’s all there is to welding really – just practice, anybody can do it!”

That after-school practice really helped Katryn during the times when she struggled with a certain weld.

“I had weeks where I really struggled. I’d stay late towards the end of the week and maybe you find an instructor or a classmate, someone who’s done it before, and they’ll help you get it. It’s a different environment. When you’re in class people are focused on grades so you’re in that mindset, but after-school, you can’t get graded…so you relax! That alone helps you during class because you realize you can’t weld stressed out or angry – it comes out crappy!

For me personally, there was a big drive to be successful. This had to work. This is how I’m going to make my money for the rest of my life. There’s no trying something else. I’d done that already…twice. That drive is what you need. You get under the hood; you focus. There are so many things to consider that everything outside doesn’t even matter. It’s almost like meditation. Hood time is good time! “

A Woman in A Man’s World?

That drive, that focus, is important to Katryn. It helps her be the best she can be, irrespective of gender.

While experiencing some first day nerves, Katryn soon realized that, as a Tulsa Welding School student, she was on an even playing field with everyone else. Being a woman made no difference.

“I guess I was curious as to how it was going to go. My main concern was I’ve never welded before, and I’m a woman – am I going to be taken seriously? Are the instructors going to take me seriously? How often do they see women in class? But, it’s been awesome. People are excited to see women; other women are excited to see women! Women can do this; there’s no doubt. From what I understand we’re pretty good at it! Go take a look at the Top One wall on campus, and you’ll see women up there – myself included.”

Consider Welding? Why Not?

Katryn believes that women should consider any career, and it doesn’t matter what it is.

“If you’re interested in it, go for it. Many women have attributes that are well suited to a career in welding. I mean why not consider welding? Women have a certain level of focus, an ability to multi-task, and we have patience. You’ve got to be patient! There’s nothing going on in a welding shop that a woman can’t handle- that a woman couldn’t do. It’s cool. That’s why you should consider it!

I’m in the best shape of my life. It’s physically demanding. I’m making great money. There’s nothing that says a woman couldn’t be out here welding! It’s different, but there are so many opportunities. There are a lot of different avenues you could go. You could start out welding, then do pipefitting. You could work with blueprints, become a foreman, you could run the show! You could do all sorts of stuff!”

Accomplishment is a Great Feeling

Many folks go through life without ever feeling accomplished. For Katryn, welding has given her that.

“Welding gives me a level of accomplishment and success that I never felt in other jobs. At school you have a project for a week, and you’ll struggle with it first without a doubt. But when you get through it, you get to the end, lift your hood and look at your weld, and you know that you did it! You figured it out! It’s not like clearing a pile of papers of your desk on Friday. It’s more personal than that. It comes back to that artistic thing. It’s your signature. It represents who you are as a welder. When you produce something that you feel adequately represents you as a welder, there’s nothing in the world that beats that! Welders have really high standards, and when you’ve met your own standards, it’s awesome!”

Write Your Own Story at Tulsa Welding School

As a graduate of Tulsa Welding School, Katryn looks forward to the future. She’d only just graduated, but she has no doubt that her career is going to be a success. She knows what she wants.

“The instructors have incredible stories; I want my own cool stories from the job! I want to travel. I want to see what pipelines are like. What shutdowns are like. I want to make my name out in the welding world. I want to be somebody who they say, “Call her up. I want that one! That’s what I want.”

Katryn learned much more than just welding during her time at Tulsa Welding School.

“Not only was it a positive experience in my success as far as my welds are concerned, but I learned a lot that had nothing to do with welding at all. I learned how to really ‘learn’ again as an adult, and how to accept failure and learn from mistakes. I learned stress management, patience, slowing down, taking pride in your work, problem solving – important life skills that are really important in everyday life.

No Experience? No Problem…

Katryn’s main concern going into Tulsa Welding School was that she had no prior welding experience. Would she be taken seriously? Would she be out of place?

“Tulsa started me out at Phase One – just like everybody else. You start from scratch, and you work your way up. The first day you’re worried because you know nothing. The next thing you know you’re talking the same language as the other guys. You’re talking about problems you didn’t know existed two weeks before. I can look back now and go, “What was my problem?” I love the atmosphere in the shop, the action. I love that it’s loud; that it’s dirty. It’s fun! It’s not boring at all. That’s why you should do it!”

“The instructors were awesome. They’re very well educated, very experienced, very encouraging. They know what they’re doing. They know how to help. But when you graduate, you’re ready. It took seven months to complete the Professional Welder program, but now I’m ready. Now, I’m a welder. Period. I’m working hard, and I’m earning the kind of money that I think I deserve. There’s work everywhere. I get to pick. I’ve never felt independence like this before.”

If you’re a Woman in Welding and would like to share your success and be an inspiration to others, please email [email protected] to be considered for an interview. Please include details such as your full name, your graduation date (month/year) and program name.