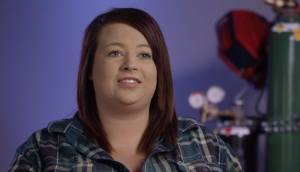 Katelyn, from Branson, MO, graduated the Professional Welder with Pipefitting program at Tulsa Welding School, Jacksonville campus, in August 2016. Katelyn was in a bit of a rut before going to welding school; she needed a change.

“I was stuck serving in the restaurant industry. I finally couldn’t do it anymore. I had to find something I wanted to do. I came to Tulsa Welding School not knowing anything about welding – nothing at all.”

We spoke with Katelyn just after she graduated in 2016. She chose welding because she’s a hands-on learner, and she likes the sense of accomplishment that comes from using her hands to make things.

“What interested me about welding was just the endless possibilities of what you can do. You can help build bridges, buildings, pipelines, attractions. You can help repair historical artifacts, things like that. I went in to welding because I liked the idea of producing something that’s going to be used. A pipeline will be used every day, a building is going to be used. To have that sense of accomplishment where you can say, “I helped build that” is rewarding.”

That sense of accomplishment started early in her time at Tulsa Welding School because you get under the hood just days after starting classes.

“It felt really good to step back from something and be able to say, “I did that”. Especially when you’re starting out, not knowing how to do it. You will mess up over and over, but then it clicks and you finally get it! You can step back and say, “Wow! I actually did it! I’ve got this now! I can do this anytime somebody asks me to do it!” ”

Katelyn chose Tulsa Welding School, Jacksonville campus, because of its accreditation[1] and the positive reviews she read online. She also knew a couple of people who went to the Tulsa campus. But it’s the instructors that made the biggest impression her.

“All of my instructors were great; they were really helpful with anything I needed. I enjoyed all of them, and they all had a lot of experience. There wasn’t just one I felt I could go to, I could go to them all. I imagine that would be the same at any TWS campus. They’re just so helpful. They have so much knowledge, and you can gain so much from talking to them.”

The other thing that appealed to Katelyn was the amount of hands-on time you get, especially when she compared Tulsa Welding School to some of the other schools she looked at.

“The hands-on learning is amazing especially if you don’t like classroom settings. It’s great. You’re only in the classroom three days out of three weeks. Other than those three days you’re in the shop, doing what you’re supposed to be doing. Welding on your metals, practicing, learning. You can come in to practice anytime. If you’re going to class at night and you want to come in to practice during the day, they’re totally fine with that. If you want to spend 12 hours here, you can spend 12 hours practicing.”

After completing the seven month Professional Welder program in May 2016, Katelyn decided to stay on to complete the additional pipefitting course.

“I went into pipefitting because it’s a deeper aspect of welding. You’re going to be more valuable if you can weld and pipe fit. Pipefitting is more tedious. If you don’t like math I don’t recommend pipefitting! But if you do like math, and you want to learn, I would definitely do the pipefitting program. It’s just three more months training, but it’s going to open up twice as many doors, twice as many people are going to look at you because you’ve got that extra training. The professional welder with pipefitting program is just 10 months. That’s less than a year to get twice as much knowledge.”

“This is the third college I’ve been to, but it was by far the best. The first school was pretty much like most colleges. Once you’re in, they just forget about you, or they’re all about money and they hound you about it. This place is completely different. If you’ve got something going on, you need help with something, tell them…they’ll work with you. They definitely care. It’s like a little family. Someone is going to help you – even if it’s something out of school. They want to see you succeed; they don’t want to see you fail. But they’re going to push you to your limits until you do succeed.”

When it comes to her future Katelyn sees no limits to her potential. She’d like to work on a pipeline, but she’s not even limiting herself to that one goal.

“I want to work on a pipeline. There’s a keystone pipeline that’s coming down from Canada through to Texas; I’m really interested in working on that. There’s a lot of money in welding if you’re good at what you do. You’re going to enjoy going to work regardless of the money, but I really like pipe welding. I’d like to travel. If I do get on that pipeline I’m going to be there for a while because it’s going to take a couple of years. But there are also things like structural where you can build buildings, or shutdowns which is quick, fast money.”

Of course there are no guarantees in life, but Katelyn believes that if you have the skills, are prepared to work hard, and can prove yourself, you can pretty much write your own ticket.

“You can make amazing money as a welder. Shutdowns are probably where the most money is to be made. You can earn $10,000 on a four week shutdown project There are shutdown jobs out there now at $44 an hour, plus $100 per diem which is for your living expenses. But there’s money to be made anywhere. Go into welding and you’re going to be able to make money. If you’re good at what you do, and you can pass your weld test and show your skills, you’re going to make good money.”

Unfortunately, there are a lot of women out there who don’t consider a career in welding because of the feeling that welding is a man’s world. Katelyn strongly believes that’s not the case at all anymore.

“Welding is definitely a good career for women. If you’ve ever thought about it but are unsure because it’s a “male dominated” trade – no, it’s not. It’s 2016 – women can do anything a man can do! If there are girls out there who want to do welding, I’d definitely recommend it. There’s so much you can get out of this. There are so many different styles of welding. If you’ve ever thought about it, just go for it.”

Katelyn came into Tulsa Welding School with no welding experience at all, and she says it was a little tough to start with…but only for a day or two.

“It was a little challenging at first, being a woman in this field. I always felt there was someone looking over my shoulder at every single weld to see how I was doing. Males tend to see it as “women can’t do this!” But I think we’re more patient. We have a better eye for detail; we’re just as good as the men. At first people might look at you and say, “Oh my gosh! There’s a girl here” but that goes away within days. Then, you’re just one of the crowd, and they don’t see you differently. Once you prove yourself, you’ll have people coming to you asking for help.

It’s amazing when you have people think you can’t do something because you’re a female… and then you prove them wrong! It’s great! If someone tells me I can’t do it, I’m gonna go do it! Just get in your booth, get your projects done, get your grades, and then practice, practice, practice.”

As Katelyn starts her new career after making minimum wage plus tips as a server for years, she’s now starting to discover all the possibilities there are with welding.

In the welding industry it’s all about your name. If you’re a good welder people are going to know who you are. People are going to call you with offers. You’re not going to have to worry about looking for jobs. I can get my own name out there, and I’ll do it all on my own.

I’m very confident that I’m going to be a success. Knowing that I can weld without having any prior experience is what really gets me, because I am a good welder. My grades show it. I have a Top One. Coming from being a server and knowing nothing, to knowing so much in ten months is amazing. I gained so much knowledge that I never knew I could gain! Tulsa Welding School has definitely given me a competitive edge.”