Stéphane, 22 from Fort Lauderdale, Florida, is a graduate of the Professional Welder with Pipefitting program at Tulsa Welding School, Jacksonville. With no prior welding experience, Stéphane decided to quit university to go to welding school. He graduated in December 2018 and went straight to work in Indiana.

Thanks for your time, Stéphane. What did you do before welding school?

I did mechanical engineering with specification in nanotechnology at college. It was a five-year program, but after three years, I realized I didn’t want to do it anymore. I couldn’t sit in a classroom and listen for another two years. I was tired of it. I had a scholarship, so I only had to pay for housing and food, so it’s not like I left with a big debt.

What made you choose welding school?

My friend was welding. He was getting paid pretty well, and it seemed interesting. I had never done any welding, but the idea of actually physically doing things at school, rather than just sitting there listening, really appealed to me.

Did you in enroll in the Welding with Pipefitting Program, or did you add the pipefitting later? 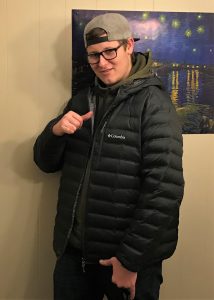 The instructors sharing their real-world stories of what we could expect after welding school, how life would be after we’re done. Listening to their experiences of welding was great, and now I’m living them.

With no prior experience, did you discover a passion for welding?

I did, yes. I like it a lot. As soon as I got to phase six or seven, I really started enjoying it. That’s when it clicked. There is a little learning curve before you get it, but as soon as you get it, it becomes so much more enjoyable. You’ve got to persevere through the frustrations. Don’t say “screw this” and go home. Fight through it.

After three years at college, was welding school what you thought it would be?

I didn’t really know what to expect. I didn’t have time to think about it. I quit school in Lakeland, FL, and two weeks later, I was in an apartment in Jacksonville and going to welding school. I really had no expectations.

I work for Progress Rail up in Indiana. I do a lot of MIG welding, a lot of stick welding. I weld a lot of pipes, brackets, components, pretty much everything. It’s all building or repairing locomotives. I work nights. My shift starts at 7:30 p.m.

It was a phase 11 job. The company came to our school looking for people to hire. I didn’t actually do phase 11 because I still had three months of school left. It was my second day of pipefitting when they told me I should take the weld test because there weren’t enough people testing. I thought I would give it a shot. I had nothing to lose. So after class that afternoon, I took the test. I went home, got a call saying I should go in for an interview, and I got the job. This all happened in early September, so they let me finish school in the first week of December. After that, I moved up to Indiana and got started.

How was getting your first paycheck with them?

The first pay check was quite hefty! They gave me a relocation bonus and a sign-on bonus. I saved every penny of it. My goal is to leave Indiana with as much money as I possibly can.

Progress gave me a two-and-half-year contract. Once I’m done, I’m probably going to head back down south closer to home. I’d like to work at a shipyard down in Mississippi, or I’ll start my own business in Florida doing vehicle fabrication. My friend is opening a shop in the next couple of months, and he’s invited me to come work with him too. But I’ll be here for the next two and a half years at least.

What appeals to you about working at a shipyard?

I just heard that it’s a really good job, and they do pipefitting, too. I can get a lot better pay because I can do fitting and welding.

It’s getting the paycheck at the end of the week and then spending it!

Did you make some lasting connections at Tulsa Welding School?

I did, actually. I live up here with two friends from welding school. There are three of us in a house, and we all work for Progress Rail. I’ve also stayed in touch with other guys around the country, although I’ll definitely be here for a couple more years before I need to find the next opportunity.

If you want a good-paying job after seven or ten months of school, stay in the program. If you don’t, then you’re just wasting your time. Do something else. At the end of the day, it’s just welding, it’s not rocket science. It’s a well-paid blue collar job. You don’t need to be a genius to do it. You just need to practice and repeat.