Monika, 41, is originally from Brooklyn, New York, but lived in Spokane, Washington, for the past five years before moving to Jacksonville in 2020. Monika graduated from the seven-month Professional Welder program at Tulsa Welding School in Jacksonville in November 2021.

Thanks for your time, Monika. What did you do before you came to TWS?

I worked in healthcare with people who had cognitive and intellectual disabilities. I was classed as an essential worker and was stuck in a residence in quarantine in Washington. Then coming to Florida during the pandemic, I was burnt out and needed a change. I have two bachelor’s degrees, so I decided to go for my master’s in Education, but I wasn’t jiving with the program.

So, what brought you to welding from grad school?

One day I saw a billboard for a different welding school for underwater diving. My brother said, “What do you think about that?” I thought, “Okay, I’ll give them a call.” I’m five feet tall…I’m tiny. They told me I was too short, too old, and nobody was going to hire me. They told me to call Tulsa Welding School, so I did. TWS was very encouraging. The woman I met immediately removed my doubts; she told me I could do this. I just had to be prepared to put in the time and effort. So, I signed up and I dropped out of grad school that same day. I wanted something different, and it was probably the best choice I could have made. 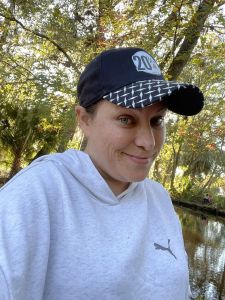 Did you know anything about welding?

I knew nothing besides the fact that you use it to build something. I’m an artist, and I looked online and thought, “Welding looks awesome!” I thought I could get into metal sculpture and take my art to another level. I also thought I could also make a career out of welding here in Jacksonville.

Did you consider adding the Pipefitting program?

No! I hate pipe. You can quote me on that. I did not want to do the Pipefitting program, I wanted to build things that are square – buildings!

That’s funny. What kind of career were you thinking at that time?

When I went into Tulsa, my intention was to get into structural welding – I wanted to build buildings. They showed me all the different phases. I thought it was something I could do. I didn’t realize how difficult it would be. I’ve always excelled at school – I get it right away, I’m quick learner. But welding was hard. But slowly but surely, I got better, I got stronger. I actually graduated early; I finished two weeks into my last phase because I had a job waiting, so I was able to plow through my final project and finish early. I wasn’t the best welder in school, but an education keeps going as you work. A co-worker of mine who has been welding a good 15 years just said to me today, “I still learn something new every day.” 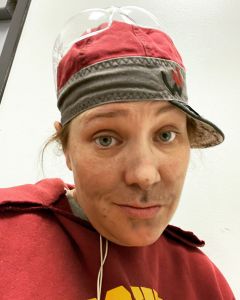 I like that once I got my projects done for each phase, I was able to try different things on my own. I don’t know how many combined years of welding experience the instructors have, but I wanted to learn a process they use in shipbuilding which the school doesn’t teach. There’s an instructor there who knows how to do that process, so he taught me! If there is something you want to learn that isn’t in the curriculum, you can still learn it, you just have to be willing to ask. You’re not limited to learning in your shift, if you want to stay late, you can stay late. I was there 12 hours a day sometimes. I wanted to put in the time.

Congratulations on your perseverance and success. So, where are you working now?

I work for a full metal fabrication shop called EJCON. It’s just 1.9 miles from my house. It takes me eight minutes in the morning, and 15 minutes home with traffic. I’m the first female they ever hired in the shop; I broke that glass ceiling, and I did it all on my own! I love the environment.

I just walked in during the first week of my last phase in early November. I happened to meet the president of the company. His exact words were, “Usually somebody calls before they show up!” I had an interview with the plant manager a few days later; I did a weld test, a drug test, and started in mid-November. 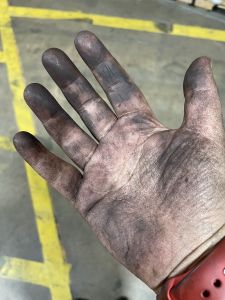 Yes. I know people in Florida are used to commuting long distances, but I don’t like to drive, and I don’t drive on the freeway. I wanted to work there, so I made it happen.

Is it a large company?

It’s considered a small company because there’s only one shift. There are 15 of us. We just hired three more people from Tulsa Welding School. That makes six TWS graduates. We’re still hiring by the way! We need more people because we have so much work!

What kind of work do you do?

Don’t judge it by their website it’s out of date! We do all kinds of things. We just finished a log elevator, and now we are building a sawdust conveyor belt for a company in Idaho. My first day I didn’t do much but sweep and learn; I watched them fabricate and loved it. I love fabrication now. I want to weld, of course, but I love putting things together. I have to say that IKEA really trained me to read welding blueprints!

Are you happy with the money you’ve started on?

Yes, I am. Starting out, it’s great pay. I don’t have any experience so I’m grateful. But having said that, I’m already making double what I made in healthcare. It’s less than a union welder, of course, union welders always make more, but I chose not to go union. There are advancement opportunities, and we have enough work for five years with just one company. Every Friday is overtime – every single Friday is ten hours of overtime. I’m Jewish, so I don’t work on Saturday, but everyone else who works Saturdays can get another ten hours of overtime if they want it.

It’s Monday through Thursday, 6am to 4.30pm, but as I say, Fridays are standard overtime at the moment. It sure beats 16 hour shifts in healthcare!

I plan to stay with EJCON as long as they’ll keep me. I love the company; it feels like home. I’ve only been here a month, but we’re a tight knit group and I’m learning from everybody. Maybe I’m old school, but I’m loyal. I don’t like to jump around.

I love creating and building. There is something about it. At Tulsa you are putting plates together, putting pipes together. It’s repetitive. I just didn’t get while I was at school. I thought it was pointless. It made no sense to me that we’re doing the same thing over and over again. I’d always complain to the instructors, “Can’t we do something different?” I didn’t get it then, but now I see it. I’m doing the same thing at work, it’s just different angles, different pieces…it’s just not plates and pipes for practice. One day I’m going to take the instructors coffee and donuts to say, “Thank you, I know I complained a lot, but I get it now!”

I did. There’s a girl who started at EJCON today, she was a good friend of mine at school, I was excited to see her here. It’s kind of nice to not be the only female, not that it wasn’t great before! The guys are great! Another friend of mind is thinking about applying too, if he doesn’t go for a job in Georgia.

For me, honestly, I would say the biggest piece of advice is to not pick up the bad habits of other people. You will see people sitting on their phones, going out for long breaks. If you pick those habits up in school, not only will you not learn as much as you could, but you will take those bad habits into your job. If you do that, you will get fired. You have to do the work.