Evan, 23, from Cocoa Beach, Florida, graduated from the Professional Welder with Pipefitting program at Tulsa Welding School in Jacksonville in February 2020.

Thanks for sharing your story, Evan. What did you do before coming to Tulsa Welding School?

After I graduated high school, I went into the United States Marine Corps. I did four years of service as a mortarman in the infantry. I started at Tulsa Welding School two months after coming home.

Thank you for your service. Had you done any welding or pipefitting before TWS?

I’d never welded anything. My high school didn’t offer welding. In fact, I’d never really thought about it until one of my best friends in the Marine Corps started talking about his brothers.

What did he say?

That his brothers were welders. They traveled around the country welding. He told me his plan was to be a welder when we got out. I asked him more about it. He told me it was fun, that his brothers made a really good living out of it, and that they had a lot of pride in being part of a group building stuff around America. It sounded like a pretty awesome thing to do, and I loved the idea of making some good money!

What made you choose Tulsa Welding School?

After my buddy convinced me to take a deeper look into it, I did my research and looked at a bunch of different places. I found that Tulsa Welding School was probably the best option for training and actually having hands-on learning, compared to most of the other schools I looked into.

Did you sign up for the pipefitting program at the start, or add it?

I added it during the welding course. I’d heard it was a really good opportunity to add an extra skill to your résumé. A lot of the instructors at the school told us that if you are a pipefitter and a welder, you are more susceptible to being hired. You have two trades instead of just one.

What was your favorite part of your time at TWS?

I definitely enjoyed the instructors a lot; they were very helpful and knowledgeable in what they were teaching us. If you had questions, they were right there to help you. They definitely had a big impact on my time at the school. I just really enjoyed doing the welding and the fitting. I love working with my hands. It’s a very prideful accomplishment when you make a really good weld or set up the right pipe, and you sit back and think, “That looks great!” 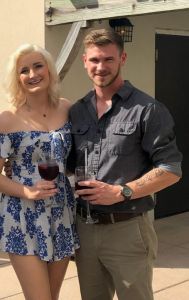 Did you find the program hard, having never done it before?

It was definitely hard at first. I knew it was going to be tough, but I never thought I’d made the wrong decision. As I said, the instructors were really good, and once they helped me, I got better. Over time you build the skill, and the more you do it, the faster you pick it up. I definitely had some days where I got frustrated, but everybody gets frustrated every now and then with something. Overall, I think it was one of the best decisions I’ve made in my life.

I’m sure you had tougher days in the Marine Corps?

I’d have to say yes to that!

Where are you working?

I work in Mississippi with Huntington Ingalls. They build Navy warships, so I’m off to the Navy! No escaping the military for me. I’ve been hired on as a pipefitter. Right now I’m working on a new ship. We set up the pipes and the welders come over to weld them, then we move on to the next part.

Huntington Ingalls came to Tulsa Welding School in late January and hired potential graduates right out of school. They had welding and pipefitting opportunities, and I went with pipefitting.

Was it a career fair?

No, they came to campus just to recruit graduates. The school knows when companies are coming to school, and they know what they are looking for. The school put us through a couple of weeks of training to be prepared for the weld test and what they would expect from us. The school calls it Phase 11.

What was the recruitment process?

We did the weld test that day in late January and they told us if we passed or failed that same day. If we passed, they told us what our starting rate would be, and had us do a drug test and some paperwork. They then called back when the drug test results came in to let us know if we had been offered the job.

When did you start?

My start date was the beginning of April. My roommate at TWS got the same job, so we packed up and moved to Mississippi at the end of our lease in early March, then I came home to Florida for a month.

You’ve been there three weeks. Were you happy with your first paycheck?

They pay weekly, so I’ve had three checks. That’s one of the great things about this trade: you get paid frequently! The money is really good, and there is a lot of room for overtime, which is awesome. You get a lot more money for just two extra hours of work a day. Unfortunately, with COVID-19 going on, overtime has been a little slow, but I’m still satisfied with the earnings.

I’ll stay here a year and reevaluate. At that time, I’ll see if there is something better out there than this job because I’m not too sure I want to stay in Mississippi my whole life. I do have a girlfriend, Canon, and she has her own plans; we’ve got to work out together where we’d like to eventually settle down.

What do you enjoy most about the trade?

It’s a collection of things. I like the pride of accomplishment; I get to build something that is definitely much bigger than myself. I like the idea that I’m contributing to something important. For the pipefitting aspect, I like the puzzle. You’re given this blueprint and you have to figure out how to put Point A to Point B, with all the measurements and math. I like the thinking aspect. It’s not like I’m sat there doing something everybody can do. And the money is definitely a plus!

Do you see yourself staying in pipefitting, or going back to welding?

It would be a lot more fun to be a combo kind of guy, doing welding and fitting. That’s my overall goal looking into the future. I honestly enjoy welding more than I do fitting. It’s a lot more fun. But out here, pipefitting pays a little better than welding.

I mentioned my roommate, and there are a few others. We met some really cool people. Pretty much every single one of us helped each other out when we needed it. The community was very helpful and was a good thing to be part of. A few of us are on group chat, and I keep up with people on Facebook.

What advice would you give to students considering welding school?

Put in the work. Come early or stay late. The better you get at the trade, the more likely it is you’ll get hired on in the very high paying jobs. I would strive to be the best because it’s definitely worth it. Staying on to do the pipefitting was an awesome opportunity. My roommate and I talked about the extra career opportunities it would give us. And it was only three more months!