Carrie, 33, from Orlando, Florida, is a graduate of the Professional Welder with Pipefitting program at Tulsa Welding School, Jacksonville. Carrie graduated in March 2013, and she now lives in Arizona with her husband and two little girls. Having stopped welding for a few years to focus on being a mom, Carrie restarted her welding career just a month ago.

Thanks for your time, Carrie. Tell us what you did before coming to TWS in 2012.

I joined the Navy straight out of high school and served for three years. I was in the Seabees (U.S. Naval Construction Battalion) and I did some stick welding. I was in the dirt navy. I was never on a ship! I came out at age 22, and my boyfriend (now husband) was stationed at Coronado, so we stayed in San Diego.

I went to work for General Dynamics NASSCO as a MIG welder. I wasn’t exposed to TIG, MIG or pipe welding in the Navy, but NASSCO had an on-site MIG welding school that they put me through. I was there for about a year.

I went to San Diego Community College for a while to do general education. Then Shawn, my husband, got out of the Navy, and we decided to head back to Jacksonville. We lived there for a while before moving to Maryland, because that’s where Shawn is from. I had stupid jobs there, none of them related to welding. Then we went back to Jacksonville, and that’s when I enrolled at welding school in 2012.

With all your welding experience, why did you decide to go to welding school?

I liked the hands-on instruction. I’m a very hands-on learner. If you just tell me stuff, I don’t process that kind of instruction very well. I have to do it to learn it. Welding is not something you can learn from a textbook anyway. Everybody at the school was really friendly, too, which made it easier to learn. The instructors didn’t talk down to you if you had a question that seemed easy. They didn’t make you feel stupid for asking.

How was it being a female in a male environment?

I’ve always been the only female welder anywhere I’ve gone. I come across some dinosaurs sometimes, but not often! It’s not too bad.

How long did it take you to get a job after graduation?

My husband and I got pregnant the week I finished school! I couldn’t weld while I was pregnant. At the time I had three different places lined up that I was looking to join, but I ended up having to turn them down. Welding is not a very healthy environment in which to be pregnant! So, about a year after graduating I went to work at a shipyard in Maryland. That was 2014. It was the last welding job I had, until this year. I spent about a year there. I think it was the favorite place I’ve worked. They hired me as a regular welder doing MIG and stick, then they moved me to another department be their TIG welder. There were only two of us in the entire shipyard who knew how to TIG weld, so that was pretty cool. 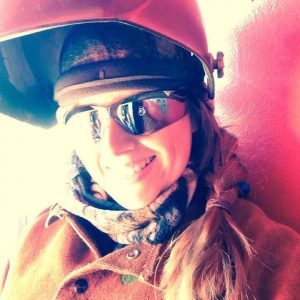 Where did your travels bring you next?

After our second daughter was born in 2015, we moved to Arizona in April 2016. I’ve been a stay-at-home mom the past few years. I hadn’t welded for the past four or five years, until about a month ago.

So, you’re back welding. Where are you working?

I’m a welder for Capstone Mining Corp at the Pinto Valley copper mine in Globe, Arizona. I’m doing stick and MIG welding. I didn’t think they do TIG, although I think they did get a TIG machine a couple of months ago, but nobody uses it! I’m going to see if they’ll let me use it.

What are you welding?

We do repairs on the mine’s gigantic heavy equipment! Massive dump trucks, and loaders. The tires on some of the vehicles are 13 feet tall. I’m doing a ton of pipe right now, but I don’t know what it’s for!

I went to them directly. My husband and a couple of friends work there. I actually went there for a job driving a truck because they didn’t have any welding positions available. But during an interview with the mine’s assistant manager, he saw my welding experience and asked if I wanted to be a welder for them. I said, “Yes, of course, but you don’t have a position available.” He basically replied, “We’ll make one!” He contacted the head of the welding department while I was there—during my interview for a different job—and they ended up inviting me back for a welding interview. I had the weld interview and then came back for a weld test.

You hadn’t done any welding for almost five years? Did you practice before the test?

Nope, I just went in, did it, and passed! Honestly, I was surprised I passed! It was a 6G 6” pipe test and I passed with zero flaws. Not going to lie, I was very proud of myself and very happy. My first day was about a month ago at the beginning of September. I love being back to welding. It seems like a good company. They have good benefits: healthcare, 401k, and decent pay.

Over six years out of school, are you still in touch with anyone from TWS?

I really just talk with one guy through Facebook. I’m still Facebook friends with another four or five but we don’t interact that much.

What advice would you share to help students be successful at TWS?

Work hard. If you’re not willing to work hard and put in a lot of effort, you’re not going to last in school, or go far as a welder. Ask questions. In my experience, welders have no problem helping you if you ask a question.