Allison, 25, from Yoakum, Texas, graduated the Professional Welder program at Tulsa Welding School & Technology Center in Houston in July 2021. We spoke with Allison four days after she graduated, just two days into her new welding job!

Thanks for your time, Allison. Tell us a little about your background.

I was fifteen the first time I welded as a sophomore at high school. I did three years welding there. Then I joined the U.S. Navy two months out of high school in 2015. I was a steelworker for five years until I separated on December 11, 2020. I enrolled in Tulsa Welding School a couple of weeks later.

Thank you for your service, Allison. Did you go into the Navy to be a steelworker?

I didn’t really know what I wanted to do, but I knew I was good at welding in high school. I was thinking about construction because someone had told me about the Seabees, the Navy Construction Battalion. They gave me some differing rating [occupation] options after I told them I was good with my hands, and one of the options was steelworker. I actually thought working on land would be a little more pleasant.

What kind of work were you doing?

With the command I was at in San Diego, CA, I did a bit of everything. We had a steel shop where we would fabricate new parts, and repair parts for different equipment. It was random, miscellaneous stuff that we worked on. I did some structural stick welding on pipe out in Virginia; I did that twice a year for four years.

Did the Navy have a welding school?

It was very short, like a two-month program that the Navy put us through. Honestly, it was fairly generic and super basic, a baseline knowledge. It was nothing compared to what I learned at Tulsa Welding School. 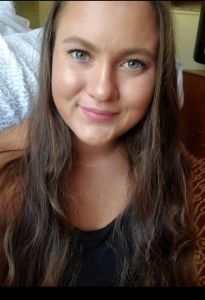 When you got out of the Navy, why did you come to Tulsa Welding School?

Because welding makes me happy. It’s very satisfying to see a project come together, and I had my GI Bill, which I am very thankful for. I wanted to learn more processes, especially TIG. With welding there are multiple processes to weld stuff. In the Navy, I was only familiar with stick welding. I had experience, yes, but when you’re in the service, you don’t do your job all day every day, like you do in the outside world. I wasn’t sitting there with a welder all day every day, five days a week, for five years. TIG was the main thing I wanted to learn, and I had never touched TIG welding until I came to Tulsa!

It was kind of the overall experience. But I had two instructors, Mr. Rodney for the first half and Mr. Manning for the second half of my program, and they were so accepting of letting everyone move at their own pace… within limits, obviously, because we had deadlines and had to have tests in by certain days.

How did that flexible pace help?

Since I had experience with stick welding, there were a lot of things I flew through. If I’d had to slow down to let everyone catch up, I would have been miserable. They had flexibility with individual skill levels which meant they could either give students more assistance when needed, or let others keep pushing forward to master what’s next, rather than sit on the same weld when you don’t need the extra work.

Did your experience help?

Since I had the experience, they raised their expectations of me, which I absolutely loved. That is only going to make me a better welder. Instead of maybe accepting something with a couple of flaws that would still pass a test for someone with less experience, they wouldn’t accept it from me. They would push me, make me work harder because they knew I was capable of getting those flawless welds and test pieces.

What shift did you do at school, and did you have time for extra practice?

I did the morning shift, 7 a.m. to Noon. Then I worked 40 hours a week at Home Depot throughout school, so I had no spare time to put extra practice.

Where are you working, and how did you get the job?

I started with Texas Pride Trailers yesterday! A manager at Home Depot heard they were hiring. He knew I was actively looking for a welding job via the school and online for when school finished. I work 4:00 a.m. to 4:00 p.m., five days a week, so that’s 55 hours a week. I get overtime for anything over 40 hours.

Did you work with Career Services?

Yes, the Career Services team at school recommended and set up a couple of different places for me, but nothing was really clicking. Nothing felt right. When I called Texas Pride Trailers, I just felt a connection right away, over the phone. They asked me to come in for a weld test and then an interview on July 2nd, a week before school finished. When I was about halfway through my test, they told me to stop, go upstairs to fill out some paperwork, and come back on July 12th for my orientation!

I guess they liked what they saw! Are you excited by the pay?

Oh yeah! Another thing I like about this company is that I’m commission based. I don’t have to sell anything obviously, but I get paid by the work that I do, versus an hourly rate. The more product I push out the door, the more money goes in my pocket. I know it’s a little early to say “I love this company.” I’ve just finished day two, but from what I’ve heard during orientation, this company really takes care of its people and they do get compensated very well for the work they put in. I’m extremely excited by that.

You’re in training now, but do you know what will you be doing?

I see myself sticking with this company for a few years minimum. Who knows? It might turn into a 20-year thing! I do want to have a family; a husband and have children of my own. The only downfall is that I cannot be a mother while actively working as a welder. I can’t breathe in those fumes while pregnant or breastfeeding. So, my plan is that once I’m married and ready for children, maybe in five years or more, I want to have my CWI [Certified Welding Inspector]. That way I can still stay in the field, but also have the family I want. An inspector can wear proper respiratory stuff if needed.

Being able to see a bunch of random little pieces come together to make something so much bigger. Imagine a child dumps out a bucket of Lego on the ground; that’s what you start with. Then you end up with a Lego castle or something! To see the before and after is just really satisfying to me.

Did you make some lasting connections at school? People you will stay in touch with.

A few. We added each other on Facebook. There were also two prior military people that I really connected with; we talk all the time. They both stayed on for the Pipefitting program. I was actually going to do the Pipefitting course, but I decided between work and school, I couldn’t do it anymore. Then this opportunity at Texas Pride Trailers came up and I felt it was meant to be. I can always go back for the pipefitting part.

What advice do you have for students to be successful at TWS?

Two things. First, there is no such thing as a stupid question. If you have a question and you’re too afraid to ask because you think someone might judge you, that’s not right. It’s better to ask a question and learn from it, rather than just try to figure it out on your own. The second thing is to take in as much constructive criticism as possible. During my time in school and the military, I discovered that there are a lot of people who do not know how to take criticism; criticism that could help you grow as a welder, as a person. If you’re too afraid to take constructive criticism, you will never get better and anything you do in life.