Thanks for your time, Laurie. Talk us through your welding career.

I’ve been welding for 35 years. I’m a 21-year U.S. Navy veteran. I joined when I was 20 years old in 1986. I was a nuclear welder in the Navy for most of those 21 years. I retired from the Navy in 2007 and worked for several companies after. I worked in a shipyard for Atlantic Marine, and I also worked for Schlumberger traveling around the world building offshore oil rigs, and in their seismic division on ships looking for oil.

Thank you for your service Laurie. Did your welding career start when you went into the Navy?

Did you serve at sea on or on shore?

Both, actually. As a nuclear welder I worked on high-pressure and low-pressure welding systems on unique material in the power plants of nuclear-powered aircraft carriers and submarines. I worked on submarines in dry dock, and I was stationed on the USS Nimitz for five years. When I went to the Nimitz, we were the first women to be stationed on an aircraft carrier. There were maybe 80 women at the time.

Did you sign up to be a welder, or did you get allocated that job?

It was in 1986 and they had just opened up different billets for females. Before it had only been administrative billets. I worked as an electrician at the time, so I went into the Navy to become a SeaBee Electrician. But they had over-billeted too many women, so they said Hull Technician was open for me. That’s the specific rating that you go in as a welder technician. I’d already sold everything to go into the Navy, so I figured I’d better go! I was actually one of the first five women in that welding rating.

I assume you had to work up to the level of nuclear welder.

Yes, I didn’t go into the nuclear side until after I’d been in a couple of years. They first teach you how to weld, how to do sheet metal, carpentry, you name it Hull Technicians take care of most of the repairs on a ship, except for electrical. The Navy have what they call ABC schools. I went to an “A” school in Philadelphia to learn to weld, the basics, and then later I went to a “C” school in San Diego for the advanced nuclear welding. These are military based welding schools. There were only three other women ahead of me that went into nuclear welding. I was at the forefront of women welders in the Navy, a pioneer!

I always taught in the Navy. They teach you that should always pass on your skills and leave footprints for others to follow. I just enjoyed every aspect of teaching while I was in the Navy. I actually rewrote a lot of the curriculum for the Navy weld school in 2000. That got me in contact with a lot of students at the time. If you’re a Hull Technician, you’re also a firefighter. I was also a fire marshal, so I taught CBRD (Chemical Biological Radiological Defense) emergencies and the technology that goes with that. I just always liked teaching. 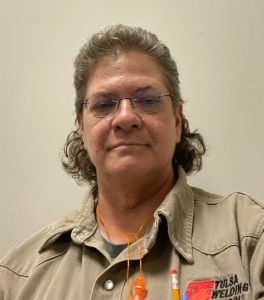 I would’ve stayed with Schlumberger, but the price of oil just started crashing in 2016 and Schlumberger started laying people off. I was one of the last groups to be laid off. They went from 180,000 employees worldwide to around 70,000 now. I went to work for North Florida Shipyard. I was a foreman in the weld shop over there. My friend Bryan Hatch, an instructor here, called me up and said there’s a job at TWS I might like. I checked it out and they actually hired me on as a pipefitting instructor. In the Navy I’d learned pipefitting, welding, structural, all aspects of welding. I was Bryan’s mentor in the Navy.

Talk to us about your family.

I have a partner and we’ve been together for 23 years. Our son is 22, and he’s in the Navy up in Virginia.

A partner of 23 years. Will you ever get married, do you think?

Yes, we actually have a plan. We’re going to take a cruise with family and friends on our 25th anniversary!

Congratulations! What is it you like best about teaching at TWS?

I like sharing my experiences with the students. It’s not just teaching them how to weld but teaching them to do the right thing when they are welding. Every aspect of what we do is important; welders build bridges, we build ships and submarines that carry people, and they have to know the importance of doing the right thing on a continuous basis. It opens up their eyes to look at something simple like a handrail on a staircase differently. People use those on a daily basis. Everything you do could impact other peoples’ lives on a continuous basis. Now that you’re a welder, you know what to look for.

I was pretty young, maybe 10, when I realized I wanted to join the Navy. My dad was in the Navy. We were stationed out in San Diego and there was an aircraft carrier, the Kitty Hawk, that was doing a home port change from San Diego to Bremerton, WA. So, they actually had a family cruise, and they took all of us up there on the Kitty Hawk. It was pretty cool. I sat out on the fantail at the stern, and it was just amazing.

I’m pretty much an open book, but I am the director of a motorcycle group with the American Legion, and we do a lot of volunteer work. Most people wouldn’t know about that.

My great-grandmother, Myrna Barton. She passed away about 20 years ago. I grew up listening to her stories. She traveled across the U.S. on wagons. They think she died at 106, but she could have been as old as 111. She was related to Clara Barton, founder of the Red Cross, they were first cousins.

What did you enjoy most when you worked in the field?

The amount of travel and being able to work with people all over the world. You learn so much, you learn different welding techniques, you learn to work with others. It brings a maturity and an appreciation that you have knowledge that you can share with others. I’ve been around the world, to places I now forget I went to! During the five years I worked at Schlumberger, I went through four or five business passports, the 48-page ones. I was all over Africa and South America, up north to Canada, Norway, Denmark—everywhere.

If you could do anything with your time, what would you do?

I love drawing nature and animals. I’d like to just sit back, paint, and camp. That would be great!

Jump on my bike and go ride! Knees in the breeze!

What’s the best piece of advice you’d give to new students just starting out at TWS?

Listen to the instructors and have patience with yourself. Not everything is about getting an A. There’s a lot more to be learned if you get that C or D first. Everything can be built on that. So don’t be upset with yourself when you don’t get an A. You learn more from your failures than you do from your successes. If you don’t make any mistakes, you’ll never learn from them. Everybody wants the high grade, but when a company calls me to recommend students, the last thing they ever ask me is what kind of grades they got? The first thing they always ask, what was their attendance?  If you are there on a daily basis, you will learn so much more than if you decide to take Mondays and Fridays off. Monday is the most important day. Make every day like the first day of a phase. Take in everything the instructor gives you, every bit of it.

It was very tough when I first got into the Navy, everything was not always fair. There wasn’t a whole lot I could say about it because nobody ever listened. I had a chief who didn’t want me there. I was the gopher; you know, go for this, go for that. He wouldn’t let me weld or even braze. He wouldn’t let me do anything. But there was a first-class hull technician. His name was Lee Harrington. He was just a great mentor. He taught me how to weld and how to braze. He helped me get more qualified than people who had been there for a while. He just told me I had a knack for it, a natural ability. He taught me more in a couple of years than I could possibly learn in 10 years. So yeah, he made a huge difference.