Bryan, 46, is a pipefitting and welding instructor at our Jacksonville campus. Born in Batavia, New York, raised in Crestview, Florida, Bryan has 28 years experience in the field, mostly in the U.S. Navy.

Thanks for your time, Bryan. When did you first think about welding?

A kid down the street had a bicycle with a broken frame, but his uncle had welded it. I saw the paint was burned up where it had been joined. I reached down to touch it and burned my finger. It was that fresh. It just struck me that something that was completely useless was fully restored in five minutes, just by the process of joining metal. I got to thinking about the endless possibilities and opportunities.

So did you want to be a welder when you grew up?

I never dreamed of being a welder. Honestly, it never interested me. The simple fact is I saw the prospect of economic gain, with minimal investment, and the instant gratification of job accomplishment. It seemed like a viable avenue to travel.

Tell us about your welding career.

I enlisted in to the Unites States Navy straight out of high school. I told the recruiter I wanted to weld, so they sent me to welding school at the Portsmouth Naval Shipyard. I spent 24 years in the Navy and retired as a Chief. I was part of a Fast Action Response Team, an emergency team that flew around the world and welded stuff. I got really interested in submarine design and repair. I invented an anti-terrorist hatch for the 688 class nuclear submarine that is on every sub in the U.S. Navy today.

By 2015, I was pipe shop foreman for North Florida Shipyards in Jacksonville. From there, Huntington Ingalls contacted me to be a senior consulting field engineer, designing piping systems for warships. They thought I would be a good fit. I did that for a year, but they wanted me to relocate to the west coast, something I really didn’t want to do. So then I did some sub-contract work for myself, utilizing Tulsa students because it’s hard to find employees out there.

How did you get introduced to Tulsa Welding School?

In 2015, I was looking for employees at North Florida Shipyards. I saw lots of applicants with degrees, but few had welding experience. I talked to a friend, John, who teaches here. He told me about the quality of his students. I said I was looking for more experience, but he explained that because of the intensive nature of the program, they might measure up to my standards. I decided to give them a shot. 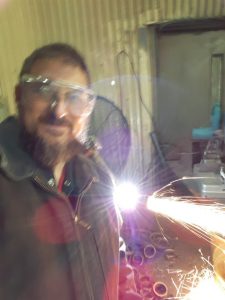 How did they work out?

On the whole, I was really impressed. They’d work for me at night—we were a 24/7 operation—and go to school in the day. Tulsa Welding School quickly became a one-stop-shop for employees. I was getting quality craftsmen, bringing them in just above entry-level. Our students are entry-level to the trade, but experts in the field of welding because they are very well educated.

How did you go from an employer to an instructor at Tulsa Welding School?

I retired at 45. I’d made my money but began reflecting on what I had done to leave a legacy. John said I should come up to TWS to teach. When he first mentioned it a couple of years before, I was making a lot of money. I wasn’t willing to give that up for an instructor’s salary. But a couple of years later, he asked again, so I thought I’d give it a shot. That was a little over a year ago.

I’ve discovered that I’m really passionate about teaching, about giving back to America’s youth and paying it forward to upcoming generations. There is a huge deficit of welding knowledge out there. This is really a hobby for me. I don’t need a job, but I do need to see my students grow. I’m very happy with what I do. I’m overwhelmed with joy, and right where I need to be.

Most of our instructors have at least 10-20 years experience in the field, some have 30. We’ve all worked in different areas: sanitary pipe, aerospace, pipeline, fabrication. That breadth of experience affords our students the opportunity to take something valuable and different from each instructor, as well as benefiting from our networks. I get phone calls every week from my network looking for employees. I’ve turned my students on to some pretty big jobs. I just sent five students to USI at $30 an hour. That’s pretty good money after just seven months of schooling.

So you have seen your students achieve success?

All the time. Two days ago, I got a text from a graduate who told me he’d worked 10 hours that day and brought home $400 after tax. I just talked to another today. He’s been working for 42 days now and has earned $24,000! You don’t need a calculator to realize the benefits of investing in this education. He could pay back his entire tuition and still have money in his pocket after 42 days on the job! How many Harvard or Yale grads could make that boast? I’m not anti-education, but I am anti-debt. I see people with Masters or Doctorate degrees who earn equitable wages to some of our graduates. But our students invest a very small amount, while college grads have $100,000+ of student debt. It doesn’t make sense to me. It’s simple economics.

The greatest thing for me is working with a student that’s been told “they can’t” their entire life, then showing them that “they can.” After they graduate I enjoy hearing about new cars, new houses, that they’re getting married. Like I said before, this industry offers immediate gratification. Students don’t come here because they want to learn to weld, they come because they want to make a lot of money. The industry is desperate for skilled welders and pipefitters.

Ben Shapiro, a conservative motivational speaker. He talks to college kids and sugarcoats nothing. He’s a genius and a fine American. I believe that every U.S. household will know his name in 2024.

It’s a very simple formula. Be punctual, drug-free, and understand that the moment you walk into a room you are being interviewed. It is not the most skilled that will be the most successful, it is the hungriest. If you show up to school on time every day and put the work in, when you leave you will be good enough—you will be employable. All the people who have come through this school and enjoyed success have one thing in common: they chose to be successful.

I’d take my Triumph motorcycle for a ride. I’m in love with my Triumph. My house backs on to the river, so maybe I’d jump in my boat in my backyard and go eat at Whitey’s Fish Camp.

I have two teachers in my life I remember. One was a second grade teacher who told me I’d never amount to anything. The other was my sixth grade teacher—Donna Holloway—who told me I was gifted and could accomplish anything. Oddly enough, I believed them both. But Ms. Holloway is a wonderful woman. I honestly believe that having her as my teacher was an intervention in my life. If it wasn’t for her, I wouldn’t have become as successful as I have. My goal, every day, is to touch someone’s life in a positive manner as she did mine.