Josh, 35, from Gore, Oklahoma, is a welding instructor at Tulsa Welding School. Josh has been an instructor with us for just over a year. He usually teaches Phase 5, which is uphill pipe welding.

Thanks for your time, Josh. How long have you been welding?

I’ve been welding about eight years professionally. I started pipeline welding in 2012. I’ve worked all over the country on the pipeline. The farthest west I ever went was Colorado, and the farthest east was Delaware. I’ve been all over the place.

You were in your mid 20s when you started working as a welder. What did you do before?

I first learned to weld in high school. It was either a vo-tech school or a technology center—I can’t remember which. But after high school I worked for my uncle as a bricklayer. I’d worked for him every summer since the age of 13 doing masonry work, so I just continued on. I did do some welding, repairing scaffolding and such, but I mainly did masonry work before 2012.

We had a baby in 2011, and the masonry work wasn’t paying as much as I could make on the pipeline, so I decided to switch and go pipelining.

I think the number one thing I wanted to be when I was little was a professional football player, but that was never going to happen! I never got big enough or good enough for that!

What made you give up the pipeline last year?

My kids were getting older and my eldest went into regular public school, so my family couldn’t travel with me. The wife and family traveled with me from my first day on the pipeline. My wife loved it on the road. We wanted to stay out there. My wife tried to home school the kids, but with three little ones, it was hard. I stayed out another year on my own, but it wasn’t much fun on the road without my family, so I decided to find something that would keep me closer to the house. 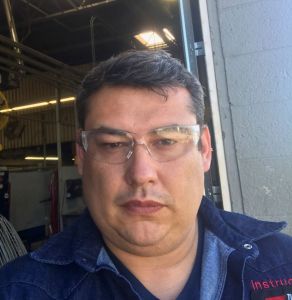 Tell us more about your family. How old are the kids now?

Megan and I have been married nine years, and we have three girls. My eldest is eight, the middle one is four, and the youngest is two.

What made you decide on teaching?

The opportunity just arose. I was on my way home from a job up in Delaware last spring. I hadn’t been in the truck an hour when one of my buddies from my hometown—Levi Reasnor—called. Levi is the lead instructor at Tulsa. He said they were looking for instructors and asked if I was interested. I’ve been here since.

I like getting to see people learn something that makes them happy and will help them do a little better in life than they might otherwise have done. I can see myself staying here for a while, maybe even retiring from it. It’s nice to come home every night and to have some job security, to not be chasing a new job every few months.

For those who would like to know more about pipelining, what do you mean?

An okay pipeline job usually lasts three months, and a good job is usually six months. I’ve got on a couple of great jobs. The last job I did in Delaware was two years. But that’s the luck of the draw. Those are few and far between. An okay job is three months, which means you’ll soon be looking for the next one.

Two years in Delaware. How often did you get home?

The family was with me the first year, but the second year when they stayed in Oklahoma, I think I got home for Thanksgiving for a week. I didn’t go home for Christmas, but I maybe snuck in another weekend. I saw them maybe 10 days in that year. That’s why it was tough, and why I decided to come home.

I’m not a very special person. I’m pretty upfront. Everybody knows pretty much everything about me!

Just the work. When you’re working, the hoods are down, and nobody is bothering you. You just do what you need to do and move on. You can sit there and think. You don’t have to sit there and visit with everybody. That’s probably the most enjoyable part about it, although everybody out there is pretty easy to get along with.

If I didn’t have to worry about money? I don’t know, maybe I’d just hunt and fish all the time.

I’d probably go home and hang out with the wife and kids. I’d try to talk the wife into letting me take the kids fishing, but sometimes that don’t happen! Megan likes to fish, but I go too much! She’d like me to stay home a bit more and work on that honey-do list!

Probably my uncle Gary. He taught me my work ethic. He showed me how to work from age 13. I used to work for him in the summers. He’s the guy I did the masonry work for until I went pipeline welding. I still go and help him on the weekends, once in a while, to have a little change of pace.

Welding is not for everyone. Be sure that this is what you want to do in life before you start. And if it is what you want, give it 100%. If you come in here slacking around, you’re never going to learn the skill. It’s an actual skilled trade for a reason. You have to learn the skills. It’s not something everybody in the world can come in and do. You are going to have to work hard to be successful.