Thanks for your time, Garrett. How long have you been welding?

I’ve been welding for about 15 years in total, but professionally since 2012. That’s when I graduated from Tulsa Welding School. I’ve been around welding for almost 20 years, since I was 7 or 8 years old.

Who introduced you to welding at that young age?

My grandpa, Doc. He would weld his farm equipment. There were always repairs that needed to be made and things that needed to be fixed. At first, I just watched, but then I got to practice on small things that weren’t as important. Eventually, by the age of about 12 or 13, I did the welding when they needed something done. They could see that I knew what I was doing by that time. After that, I also took a welding class in high school where I built three different trailers for my grandparents.

I kind of had astronaut stuff in mind as a kid! You know NASA does stuff for the smaller kids? I did a couple of those, but then money became an issue in keeping up with that. As I got a little older, I didn’t know what I wanted to do. I had family that drove semis, family that were farmers. They always told me not to follow their path because there are better things I could do. So I tried to find something where I could make a little more money and not live at the lower income level like everybody else was.

That’s why you chose welding. Smart! Did you come to TWS straight out of high school?

I worked the summer after my senior year to save a little money, then I started at Tulsa Welding School in September 2011.

Tell us about your welding career.

After I got out of welding school in 2012, I stayed in Tulsa and had a little trouble finding a job. A friend from welding school, who graduated with me, got a job in Chanute, Kansas, which is about two hours north of Tulsa. He told me to come up because I should be able to get a job pretty easily. So that’s where I ended up doing most of my work. I was almost six years to the day with the same company, doing boiler fabrication and a lot of pipe welding—basically boilermaker work as part of the union.

After six years, what brought you back to Tulsa?

My girlfriend Carli, now my fiancée, was finishing nursing school. We’d talked about moving closer to Tulsa or Kansas City, a metro area where she could make more money as a registered nurse. We chose Tulsa. 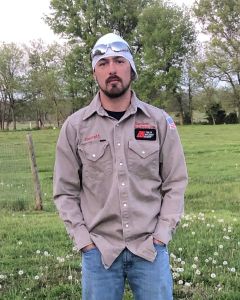 What made you decide to go into teaching at that point?

I was looking for a change of scenery. I’d been working pretty hard for six years. I was looking for something a little easier on my body, a little more relaxed. I’d kept in touch with an instructor from my time here, Zoë Hocker. I shot him a text to see if he’d heard of any good work down here. He said they had an opening as an instructor if I wanted to take a weld test and try it. I figured I could try it. If I didn’t like it, I could find something else. But I liked it pretty good and two years later I’m still here. I could make more money in the field, but money isn’t the most important thing in life to me. With Carli now a registered nurse, I don’t have to work as hard as I have in the past for us to make a decent living.

What I like the best is explaining to someone how something works, or even just giving them small tips. Then 10 or 15 minutes later, they come back to tell me that what I showed them really helped. It made what they were doing a whole lot easier. That just makes me feel good.

You mentioned your fiancée, do you guys have kids?

No kids. Carli and I have been together just over six years now. We’re hoping to get married next year.

I don’t know, I’m pretty open. Outside of work I like hunting, fishing, and tinkering with mechanical stuff.

I’d say my great-grandfather, AC, who passed away a couple of years ago. There’s so much I don’t know about him. I didn’t really have time around him to be able to talk for any long period of time, maybe an hour here or there. It would be nice to have that older person perspective to see how things used to be.

Being a perfectionist. I like being good at things. I don’t like somebody else being better than me. A term we use a lot is welding is “slick” for a good-looking weld. One thing I really enjoyed was putting down a weld that looked really good, and then have someone else walk by and have to stop and look at it because it looked really slick, and then come back and compliment me!

I’d probably spend my time hunting and fishing. I’d like to introduce younger people to the outdoors to keep the older traditions going. I’d like to show people that being away from society and technology can still be fun.

Not really, I didn’t have a favorite tool. But I wasn’t afraid to grab anything and basically learn how to use it. I like learning more about using different types of tools to be able to do my job more efficiently.

If my fiancée was not working, we would either go out to eat or see if she wanted to pack up and go fishing, something like that. Just kind of have a getaway type of day.

My grandfather, Doc. He was a good role model. He taught me that working wasn’t necessarily a bad thing. But also, to be smart about the way I work so I could be more efficient.

This school is effort dependent. You get out of it what you put into it. Don’t be afraid to go the extra mile and put in the extra work. Ask questions and get as much out of the opportunity as you possibly can. Try to become as good a welder as you can while you’re here, even if it means putting in a couple of extra hours every day outside of your class period. Just keep burning rods.

How do you help students who are struggling and getting frustrated?

If you are struggling, don’t quit. Take a breath, relax, take your mind off it for a minute, and come back at it fresh with a clear head. Ask your instructor to explain it again, maybe with a new approach. A lot of times that helps quite a bit. When you struggle you get frustrated, you internalize it and sit there and stew on it. That just makes welding harder. You start being more particular, more critical of yourself so when you do mess up one little thing, you start beating yourself up. That’s when I try to get someone to go outside, take a breath, clear their mind and come back strong.