Zoë, almost 32, is originally from Grove, Oklahoma. He is a lead instructor at Tulsa Welding School and has been with us more than seven years. Zoë and his wife welcomed their fourth child on January 16th 2019.

Thanks for your time, Zoë. Tell us about your name; it’s unique for a man.

Zoë means “life”. My parents weren’t supposed to be able to have children. They prayed and said if they were able to have a child, be it boy or girl, the child would be named Zoë, and here I am.

That’s interesting. Please share your experience in the welding field.

I’ve been welding professionally, making money out of it, since I was 18. Most everything I did in the field was piping. It was mostly shutdown/turnaround work at refineries and plants. I worked 7 days a week, 12 hours a day. The money was always really good, but it was seasonal. I’ve been teaching now for 7½ years.

What made you decide to go into teaching in 2011?

I got married in 2008 and my wife traveled with me everywhere for work. When we had our first kid in 2009, they both came. The only job they didn’t come to was in Trinidad in South America. In 2011, she said she was done traveling. We were never home, never saw our family… she was done. She wanted me to find a job where I’d be home. She did my résumé and put it online, and the former director of education at TWS called. He said I had pretty extensive work history and if I would be interested in being an instructor.

Had you considered teaching?

I always enjoyed helping people out on the job if they didn’t know how to do stuff. But when the director called, I kind of laughed and said, “I’m 24 years old, I highly doubt anyone is going to want to listen to anything I have to say!” He understood where I was coming from, but said “we can learn from anybody.”

I did a weld test, cleared the background stuff, and started work. My first three years, I did nothing but 15 hour days. It was awesome from my perspective. I went from working 7/12s to working five days a week, 15 hours a day. I was busy through the week but I was at home, and had weekends off.

The best thing about it is seeing progression. Taking a student who does not have the ability to weld, and seeing the progression they make by the end of the day, week, or phase. If I see someone struggling, I tell them to take a picture and we’ll revisit it at the end of the week or the phase. When they see for themselves how far they’ve come, it’s helpful. I love this job. I’ve worked for a lot of different companies in a lot of places and welded on a lot of different stuff, but this is the most rewarding job I’ve had.

What makes it rewarding?

When graduates come back and say, “If it wasn’t for you, I wouldn’t be where I am today. Thank you for your help.” It doesn’t happen often, but when it does, it means a bunch. Teaching is a way of giving back. 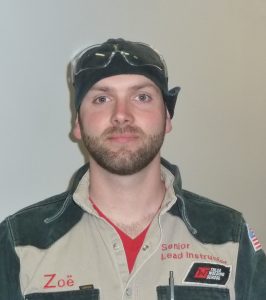 What shift do you teach?

I’m on a rotating schedule. I work the day shift and then every six weeks I go to the night shift, so I get to see pretty much every student in one way or another. I teach a different phase every three weeks. My favorite phases to teach are the TIG phases, as that’s primarily what I did in the field.

My wife and I have two boys and two girls. We both have unique names—my wife is Von—so we decided that we would give our kids unique three letter names, too. So we have Zai, she is nine. Tru is five. Arc is two and definitely a firecracker. His name suits him! Our youngest is Joy; she arrived in January.

As a boy what did you want to be when you grew up?

I wanted to be a helicopter pilot.

Did you ever take that idea anywhere?

I did. I was 18 and making all this money welding. I didn’t have a family, so I started working on getting my private pilot’s license. I was flying a Cessna but told my flying instructor that I really wanted to fly helicopters. He gave me something to think about: when your engine goes out in a plane, you have a glide ratio. But when your engine goes out in a helicopter, what you see through that little glass window in the floor is about where you’re going to land! After he told me that, I lost the desire to fly helicopters.

Did you get your pilot’s license?

Officially, no. I got all my hours and was ready for my check ride, but I lost my log book so I couldn’t get my license. That was about the time I got married, and my life changed.

It would be my granddad, Dennie. We were close. He passed away 3 years ago.

If I had time to myself to do anything, just me, I’d go for a horseback ride or maybe do some shooting. I’ve not had that time for a while! I used to do a lot of riding and shooting growing up. My granddad and I used to break horses together.

My TIG torch was very valuable to me.

Doing the stuff nobody else really wanted to do. I worked in a lot of inert atmospheres, like the area under a nitrogen purge. I’d have to go down in a fresh-air suit. It was a little dangerous. If my oxygen line was cut I’d more or less have suffocated! Thinking back, I was kind of dumb, but I enjoyed it and it paid very well. I didn’t have a wife or family, and nobody else wanted to do it, so I put my hand up!

If you weren’t a teacher what would you do?

If I had a clean slate to start over I’d probably still choose a welding career to provide a good life for my family. It has been a rewarding career and something I love doing.

It would be my granddad Dennie. He instilled a very strong work ethic in me. He was a carpenter. I spent three summers with him, from 12 to 15. We built several houses and garages together. Looking back, if he hadn’t ridden me so hard those summers, I don’t think I would be as successful as I am today.