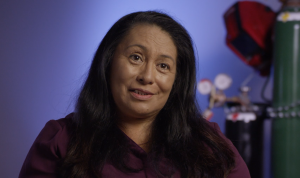 Jackie was a carpenter. She had her own framing company, but in 2005 the framing business took a turn for the worse, and she was out of work for several years. Someone offered her a job as a fire watcher in Kansas which is where she was first introduced to welding.

“The guys on the job tried to teach me how to weld. I liked it, I liked the money they were earning too, so I came to Tulsa Welding School in Jacksonville to learn welding.”

When Jackie first started the program at Tulsa Welding School, she didn’t think she was going to make it.

“I’m very old…I thought people my age wouldn’t be able to weld or be able to learn to weld. It was a good challenge, I kept going and going. I mostly got ‘A’s, good grades, and I started to love it! The instructors at Tulsa are very good. I didn’t have a problem with anybody. They were very helpful.”

Welding School or On the Job Learning?

While working as a fire watcher, Jackie tried to learn from the welders on the job, but she just wasn’t getting enough out of it.

“Sure you can learn a little bit, but it’s not what you really need to know. I saw a lot of guys in the field who’d say, “You don’t need to go to welding school. You can learn it here.” That’s not true because, first, companies don’t like it. If you’re working, you’re there to do a job, not to teach someone else to weld.

For me people who go to school are better welders. When I worked in a shipyard, you could tell the results of someone who went to school were better than someone who didn’t. It’s like playing an instrument – if you don’t know the basics of music, you’re just playing by ear, but if you know the basics, the result is better. That’s what I think anyway.

Every kid I see who doesn’t know what to do, I tell them to go to welding school. Learning in the field is not the same as somebody telling you about the angle of your hand, or the position you need to be in to weld properly. Trying to learn on the side on a job is not the same as learning welding at school.”

Jackie loves to weld because she’s doing something that she really enjoys doing. At the end of a job, she gets very excited about what she’s produced!

“When you lower your hood, you’re just getting on with your own work. It’s just you, your job and nothing else. You concentrate so much on what you’re doing that nothing else counts. To get a weld done well, you need to concentrate. It’s like a racehorse running with blinders on; they only focus ahead not to the sides. That’s the way I think when I’m welding.”

Jackie has seen her fair share of sexism and prejudice in the workplace. Instances where men have assumed that she can’t do it because she’s a woman…but she has proved every one of them wrong once she gets the opportunity to prove herself and show her work.

“Working in welding, construction, or any place where it’s mostly men, they don’t trust you as a woman. I had a lot of problems with supervisors until they saw my work. I’d show up and they’d give me a broom! I got in a lot of fights – I’d tell them “I’m a first class welder. I’m not going to do that! Give me the tools I need to weld or I quit!” Their attitude always changed when they saw my work.

Nobody can tell a lady they can’t do this until they try it. After I became a welder, I spoke with a lot of female fire watchers on jobs who’d ask me about welding. I’d tell them that it doesn’t matter if you are tall, fat, skinny, or small because there is so much welding work. They just put you where they need you. Any woman can do this. I know several of those women went to welding school to become welders.”

But despite having to prove herself more than the men do, Jackie still recommends welding to women.

“I’ve seen a lot of ladies make really good money welding. I mentioned I thought I was too old when I started school. Well, I’ve seen ladies out there welding at 65 years old. In some other professions you need to quit at 55, but not welding!

A young woman out there looking for a career can do very well in welding. It can be a lifetime career. Not only is the money good, but women are more exact, so they can progress really quickly. I’ve seen women aged 24/25 as supervisors – you don’t see that in other trades. For example, electricians – you wouldn’t see a 25 year old woman as a supervisor, but in welding…yes.”

Jackie worked on one job where they had split shifts – day and night. A guy, a welder with eight years on the job, would come in at night to take her place on the job. She’d come in the morning to discover that he’d done the easy part and left the tough part to her. He didn’t know that his partner on the day shift was female with only a few years experience. He’d seen her welds from previous shifts and left the tougher parts of the job to someone he thought was a better welder.

When Jackie decided to enroll at Tulsa Welding School, she was at a low point in her life. She’d gone from running her own framing business, to not being able to find a job anywhere. So, despite some of the sexism she’s faced in the field, she’s very thankful for the decision she made in 2008.

“One day when I was having an issue with a supervisor being prejudiced against women. Somebody told me that the joy that I can get from welding…nobody gave it to me so nobody can take it away. I earned it myself. And it’s true. The way that I weld; the way that I accomplish my job, is my joy. I am proud of what I can do welding, and I’m very thankful to Tulsa because that’s where I started.

I’m very happy that I found a place that helped me change my life. I was at a point where there were no jobs, not even at Wal-Mart. As a single mother I didn’t know what to do. There was no way for me to feed my family…until I came to Tulsa Welding School. Then “Boom!” – seven months later I’m working, making money doing shutdowns and everything. I’m very thankful for Tulsa Welding School.”

There’s no doubt that the money Jackie made help her turn her life around. Even though she made pretty decent money as a fire watcher, it was nothing compared to what she earned as a first class welder.

“Being a fire watcher on a shutdown, I’d make maybe $900 a week, but it was 12 hours a day, seven days a week. I know that’s good money, but as a first class welder, I could make $2400 or maybe more each week on a shutdown. Of course shut downs last maybe six weeks or so, then you could be off for a couple of weeks until you get to the next one, but it’s great money. In shipyards you don’t make that much, but it’s still good because they’ll pay $22-24 an hour. It depends where you go.

It is true that welding is hard. The job is very hard; you’ll get burned – I have burns all over my body! -And when I worked in confined spaces, I’d get out with bruises all over my body. This sounds funny but most welders are proud of their burns and their scars!”

If you’re a Woman in Welding and would like to share your success and be an inspiration to others, please email [email protected] to be considered for an interview. Please include details such as your full name, your graduation date (month/year) and program name.