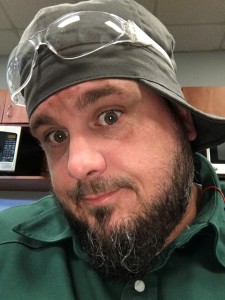 39, from Houston, Texas, graduated from the Welding Specialist with Pipefitting program at Tulsa Welding School in Houston on December 2, 2016. Sean had worked in and around the oil fields of Texas for 20 years before 18 months of unemployment forced him to rethink his career.

Thanks for sharing your story Sean. Tell us about your background.

I am a machinist by trade. I’d progressed in pretty well in my career and was managing a machine shop in Houston, but a couple of years ago the oil field crashed and I got laid off. I was on unemployment for about six months then blew through my 401k. Money was running out, and there were no jobs available in the trade. I’d got to thinking what am I going to do now? Am I going to wait for the oil field to kick back off? I was running out of money and, life was kind of kicking me as I was down. You know?

What made you choose welding?

There was the money potential, the freedom of being able to work anywhere, and the fact that it didn’t rely on the oil fields. There were a lot of different parts that attracted me to it. I came to the realization that I needed a trade that didn’t depend on oil. I’ve been in the oil field one way or another since I was 18. I’ve been a roughneck…done all kinds of jobs and always been moving around. I’ve been up and down with it, took the kicks and bruises that come with it, but I decided I needed another trade. I just needed a change. I needed to get back to work. I’d been interested in welding for years, so I researched welding schools and found Tulsa Welding School.

Why did you choose Tulsa Welding School?

From my research I’d heard it was the best in the country. So I came up and took a tour, talked with a lady up there, and decided this was what I was going to do…with the help of my girlfriend of course. She helped support me while I went to school. I lived down in Lafayette, Louisiana, at the time, so I had to move back to Houston. That was kind of tough as I’d just moved to Louisiana the year before to live with my girlfriend, but I did have some friends in Houston that I could stay with. I had to get a part-time job to help out with the money side of things. I went to school in the mornings and worked in the afternoon.

How did you find going back to school at 38?

It’s hard to do, but it’s worth it. It’s pretty tough to go back to school when you’ve been working since you were 18. I’d never been without a job more than a few weeks, so this was a new avenue for me. It was kind of disheartening, but I had to do something. I’m not a quitter, so I decided to go to school. I really enjoyed it; the teachers, the staff, everybody made everything pretty enjoyable. I made some new friends. I’m actually working with a couple of people that I went to school with. It’s been a whirlwind. It’s just three months after graduation, and I’m not where I want to be yet, but I’ll get there. It’s gradual.

What did you enjoy most about the program?

I really loved learning heli-arc [TIG] welding; I’m pretty good at it. I mean, I’m not the best, but I picked it up pretty quick, and I really enjoyed that section of the program.

Did you feel like you were on your way to becoming a specialist when you left Tulsa Welding School?

I was pleased with the education. I learned how to weld, got all the basics. There are things out in the field that are different. I learned that with Saulsbury, but the foundation and the basics are all there at Tulsa Welding School. You only really start to learn the job once you get on it, and that’s the same with any job. It’s not going to be exactly perfect and ideal conditions – stuff like that. But for the foundation, I do feel I received a good education. I’ve recommended the school to several people actually.

How quickly did you get a job?

About a month after graduation I started at Saulsbury Industries making $28 an hour building LNG plants. I was there for a little while, but I busted a weld, so they let me go. That was my first experience with welding, and it taught me that you have to be really good to make the big money.

That was a setback. Looking back would you have done anything different at school?

I would have liked to have practiced a little more. With my schedule, it was hard for me to get in after class, so I basically just went through the actual course. I didn’t take any extra steps. I might have gone in to practice a couple of times, but it was very rare. As long as they have a booth open, you can go in and practice as much as you want. I just didn’t have the time. Even as a graduate, you can go back and practice as much as you want.

So where are you working now?

I called a buddy of mine after I got laid off, and he told me that Universal Steel America was hiring. I’ve been working there ever since. I had to learn how to sub-arc [SAW], which is a welding procedure that I hadn’t done yet. So, I’m getting some experience in different avenues. I work 5 p.m. – 5 a.m. Monday to Thursday, 5 pm – 3:30am on Friday, and 1 p.m. – 9:30pm on Saturday. That schedule kind of screws with your system. It doesn’t leave much time to do anything else. They started me out at $17 an hour, but I’m hoping for a bump after my 90 day review. It was kind of a kick in the gut after starting at $28 at Saulsbury, but I took it to get some experience and get working again. I needed money in my pocket.

Where do you want your welding career to go? What’s your dream job?

I don’t really have a dream job. I’d just like to be working for myself contracting out to people. Whether that’s on a pipeline or on an oil rig, it doesn’t really matter. I’d like to get my own truck within 12 to 18 months. I’m just working towards that. I’m saving for my truck right now. Then I’ll start saving to buy my welding rig. Once I’ve got set up, if I can get on with a pipeline company, then I’ll go straight to work with them [as a contractor]. But while I’m building my truck, I’ll continue with Universal Steel America plus doing some side work or whatever.

Is traveling something you want to do?

Yeah, for sure. I’m about to turn 40 and being out of work for 18 months means I’ve blown through my retirement and everything else, so I’ve got to go and make as much money as I can while I can. I’d go anywhere, domestic or international. As long as the pay is there, and they’re going to compensate me well, I’ll go do it. I moved around a lot in with jobs in the oil fields, so traveling really doesn’t bother me.

What’s your favorite part of being a welder?

The sense of completion. The fact that I’ve built something, I can say I put that together, and it looks good. It’s professional. That’s what it does for me. I like the fact that it’s something you can see. It’s not moving numbers; it’s tangible. You can touch it!

Every job you’re on, you’ve got to be thinking about the next job because that job could end. That’s just the way it is, so keep everybody’s number that you come in contact with! The more people you know or are in touch with, the people you have to call when you’re looking for the next job. I just got a buddy, another student, a job with another guy I know. He just started today.

What advice would you give to people your age considering going back to school?

Keep an open mind, and just know that going back to school is something you can do. You just have to put your heart into it and put the effort in.

What was the toughest part of going back?

Getting up at 5 a.m. to go to school. I’m kidding; it wasn’t that hard! I guess the diversity with the younger crowd. You see kids just kind of taking it easy or not showing up, and I think you’re paying good money for this course, why wouldn’t you be here? But, I really didn’t have an issue with anything.

What do you do for fun, Sean?

I like working on my jeep, or hanging out with my girlfriend going to the movies. I also like to hunt and fish, and I like guns. I have a 12 year old son. I talk to him two or three times a week and go see him whenever I can. He’s very proud that I went back to school and did what I did.

I hope not! I want him to be a CEO of something somewhere! He’s a good kid, very intelligent, so I don’t want to direct him in any way. He’s smart enough to make his own decisions. I just want him to be better than me. You know; that’s all you can hope for with your kid.