Wawing, 21, originally from Haiti, has called West Palm Beach, Florida, home for the past nine years. He graduated from the Professional Welder program at Tulsa Welding School in Jacksonville in October 2018. He now works at SpaceX in Cocoa Beach, Florida.

Thank you for your time Wawing. What did you do before coming to Tulsa Welding School?

I graduated high school in 2017 and went to community college to get my prerequisites for firefighting. I wasn’t really suited to it. It was what my parents wanted for me and I wanted to make them proud, to be the first one to graduate college. But after three or four months, I knew that college wasn’t for me. I decided to move out of my parents’ place, and worked as a security officer at a mall.

How did you discover Tulsa Welding School?

My girlfriend Isabel and I were struggling. I like to take chances, and God has not failed me yet, so we moved to Jacksonville. It’s a bigger city. We thought we would have more opportunities. To be honest, I didn’t know what welding was before I moved to Jacksonville. Isabel went first and found us an affordable studio. I asked her to look into institutes for me while I finished up down in Palm Beach. We were young and hungry, both just 19. Isabel found Tulsa Welding School and told me they had HVAC, electrical, and welding programs.

How did you decide on welding?

I went to TWS and met with Fred, an Enrollment Advisor. He asked me what I thought about welding? I said, “What is it? Seriously, I don’t know what welding is. I came here to talk about HVAC!” He asked me what I wanted to do, what I was good at. Based on what I told him of my time in Haiti, he thought welding would be good for me. He walked me around the shop and I fell in love with it. I knew it was what I was looking for. I called my parents to tell them I was staying in Jacksonville and going to welding school, even they didn’t know what it was! Fred became a really good mentor for me. He wasn’t just trying to get me into the school. He became someone I could sit down and talk with throughout school. 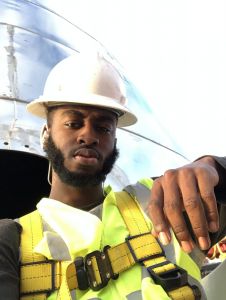 What did you parents think?

My mom supported me 100%. She sent me money and she made it happen. All I had to do was attend school and she would help me out. My dad came around once I started working at SpaceX.

I think the instructors. A lot of students had some welding knowledge, but I didn’t. I was a sponge, trying to soak up all the information I could. They really wanted to help me out, one on one. They would hold your hand to help you learn; I mean literally hold your hand welding. That was a little bit weird at first, I wasn’t expecting that. They really wanted you to learn, not be able to just pass a test. They were very dedicated to helping. If you were there to learn, they would do their best for you.

So let’s talk about SpaceX. How did you get the job?

Stacey in Career Services sent me the opportunity. SpaceX was looking for 50 welders. She emailed me the information I needed to fill out. Two days later, I took a weld test, and boom, I’m into SpaceX! That was in October 2019.

You graduated in October 2018. What did you do for that first year?

I got another welding job while in school. In fact, I’d told careers services that they didn’t need to keep sending me emails about other jobs because I already had one. But the location wasn’t great. My girl and I share one car, and it got slow. The hours weren’t great, so I gave my two weeks’ notice. Two days later I called Tulsa to see if they could help me out, and that’s when the SpaceX opportunity came up.

Great timing! Can you tell me what you’re doing with SpaceX?

Not really, but I can tell you the basics. I’m a combo welder. I weld pipe: MIG, TIG and Stick. I work in a lot of confined spaces. They train you in that. I’ve had an opportunity to weld rocket ships – I’ve been 50 feet up welding pipes inside a rocket ship!

That’s very cool! Could you believe you’d be doing this just two years ago?

Are you happy with the money you’re making as a welder?

It is one of the best things that has ever happened to me. With the money I’ve earned, I was able to buy a mobile home for cash. I don’t have a lot of experience, but the pay is good. They started me off at $26+ an hour, plus another $5 an hour because I work overnight, so I’m earning $32 an hour. I work six days a week, twelve hours a day. The max I’m allowed to work is 152 hours in two weeks, so you do the math. That’s a nice paycheck. When Isabel saw my first SpaceX check, she said, “Who’s going to buy the ring? If you’re making that kind of money, you’re not going anywhere!”

Did you know about the money potential when you started welding school?

I want to get some more experience, and go further. The pipeline is something I’d like to get into, but I really want to get into commercial diving, to be honest. I want to do some underwater welding. I don’t know what the future holds for me, but for now I hope to stay longer at SpaceX and learn whatever I can learn to build my experience and become a better welder.

What do you enjoy most about what you do?

It’s the fact that I’m doing something with my hands. I’m like an artist. Once the hood drops, I’m in my world. I don’t think about anything else other than what’s in front of me. This is what I was made for really. Of course, working on something like a rocket ship is exciting. I love my job, but I think working at a shipyard would be exciting too. I’m just happy to be a welder. Anything along the way excites me.

Did you make some connections at Tulsa Welding School?

It’s like a brotherhood. I graduated with 20 guys, and they’re all on my phone. When you go to Tulsa, of course, you compete to be the best welder, but we all tried to help each other out, too. Not only in class, but outside school if we needed something. One time my car broke down on the highway when I should have been in class. One of the guys came and picked me up during break. Like I said, it’s a brotherhood.

Be very dedicated. Make sure you have a passion for it, to keep on going. Welding is not for everybody. The reason I got through it is because I wanted to do it, not because friends or family wanted me to. If you don’t, don’t do it because it’s not going to work out for you. There are going to be a lot of ups and downs, especially at school, and a lot of frustrations. So you have to have a lot of patience, and the desire to fight through and get better. If you do, anything can happen! Look at me: I’m welding rocket ships!