Noah, 25, is from Ocala, Florida. He graduated from the seven-month Professional Welder program at Tulsa Welding School in Jacksonville in February 2022.

Thanks for your time, Noah. Tell us about your journey to Tulsa Welding School.

I actually went to prison when I was 16. I made a bad choice; it was for burglary. I got juvenile life, which is 16 to 24. I got out in the summer of last year.

So, what made you think about welding?

While I was in prison, there were a couple of inmates who welded. I thought it was really cool. Later I did a work-release program, kind of halfway in and out of the community. I worked as a roofer, making $12 an hour. One guy worked as a welder. He made $16 an hour, which was unheard of on work-release. Nobody makes that. Period. The special treatment I saw him get was interesting to me as well. We lived in the same bunk rack, so he explained welding to me. He talked about the job security welding brings—anywhere he goes he’ll always have a job, he said. That really piqued my interest, so I started researching welding. 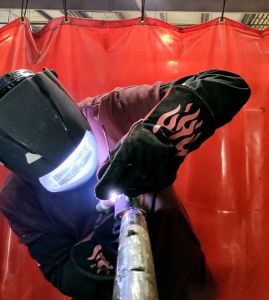 Had you ever done any welding?

I worked at a shop when I was really young. The owner’s brother let me weld a couple of simple things, but the first time I really seriously welded was at Tulsa Welding School.

How did you decide on Tulsa Welding School?

I heard stories about people being discriminated against for being a felon. I’m a statistic, part of that group, and I worried about it. There were guys talking about going to Tulsa Welding School. So, I called the school. I ended up speaking with the Campus President for a half an hour. The guy was dead set on me coming. The statistic is that three out of four people released from prison will go back within three years. This guy really pushed me to come to Tulsa. He didn’t want me to be part of that 75% statistic. I felt he really cared and that meant a lot to me. The first thing I did when I got out was sign up. He went out of his way, and it touched my heart. It made me feel better about myself and my decision.

Don’t you need a high school diploma or GED to enroll at TWS?

You do, but I got my high school diploma in 2018 while I was incarcerated. It was a lot easier than I thought. 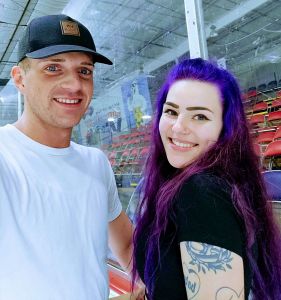 Being able to make something out of nothing was the best part. I liked the fact that we didn’t have to beg for material. You could weld as much as you wanted, with as much instruction as you needed. It’s a really open, very welcoming place. When I signed up, I was a little nervous to be around new people. But the first day, something about the place gave me a sense of purpose. I felt I was moving in a good direction.

How did you find the program? Was it hard?

There were days when it was really hard. Lots of little things will really irk your nerves. There were times I got angry and frustrated, but I didn’t think of quitting. My instructors would come by, even the student services lady. Whenever I got frustrated, they told me to take a walk, get a drink, calm down and try again. My attendance wasn’t the best. I had a lot going on. I worked as a server and would often get home at 3:00 a.m., which made being in school at 7:30 a.m. impossible. But the staff was really involved with me, they worried about me, pushed me. They weren’t like, “We’ve got your money, we don’t care if you come in or not!”

So, what was your personal motivation for not quitting?

I lost a lot of people while locked up. My grandparents raised me, and I lost both of them while in prison. I don’t have much family. The only person I really have left is my sister. I didn’t know her very well growing up, but she took me in. I slept on her apartment floor. She encouraged me, and I didn’t want to let her or myself down. I could have got two jobs instead of going to welding school and got money faster, but I had a long-term goal. As I said, most guys wind up going back to prison, and I didn’t want to be one of them.

Congratulations on sticking with it. Tell us about your job search. Did the school help?

They try very, very hard to get you a job. I know that they can’t guarantee it, but so many recruiters came into Tulsa from different companies, like once a week probably. If you want a job, and you’ve got the right attitude, you can get a job. Tulsa is like a gold mine to employers, especially out west. They want welders badly.

So how did Career Services help you?

I would usually sit in on those recruitment days, even when I first started at school. I’d listen to what the companies had to offer. There were a couple than rang deep with me. One was Ingalls Shipbuilding. They build like 60-80% of the Navy’s and Coastguard’s ships. But I fell in love with a girl who has her own career here, so I decided to stay local for now. The Career Services team sent an email with local job opportunities. A company called Chancey Metals was first on the list, so I called them first. They asked me to interview and gave me a weld test. I’ll be honest, I’d not welded on anything that thin, so I messed up the test completely. But my TWS diploma got me the job. I promise you, if I’d have shown up and done that test without a diploma behind me, I would not have got the job. I wouldn’t have hired me!

Did having a felony record cause a problem?

Not at all. I had to include it on the application, and the one charge I had came with six different felonies, so there was a lot to put on there, but they didn’t say anything about it. I didn’t have to explain myself. They didn’t care. They knew I’d been to Tulsa Welding School, and I was heading in the right direction.

Are you happy with the money you’ve started on?

I am, actually, and they promised me a raise after 90 days, with progressive raises every 1000 hours or something like that. I think that’s pretty good. I never thought I’d make over $12 an hour.

I want to own my own business one day. Shipbuilding would be what I’m going towards at some point. I’d love to work for Ingalls. But I’m going to college in a couple of months. I’m going to start an Engineering degree. I love welding so I’m going to keep working. I talked with the owner and he’s encouraging me. This company is going to need engineers. I want to keep welding because it’s fun, but I think the two go hand-in-hand. If I have both skills, I’ll be an asset and I want to become irreplaceable. My TWS diploma was the confidence booster I needed. I’ve been a quitter my whole life if I’m honest with you; I quit everything. But the fact that I completed this and have a diploma to prove it, gave me the confidence and motivation I needed to go to college and keep progressing.

I’ve got a sense of achievement for what I’ve achieved, for where I am. I couldn’t have got out of prison and just found myself here in this company. It’s not possible. I like that people aspire to be welders. It’s just a great feeling completing something. I’m competitive, too, so I can finish stuff faster than guys who have been here a couple of years. I enjoy that. It’s like shooting hot lava out of a gun. It’s awesome!

Yeah, a  couple of people. There’s a girl who will be the most successful of all of us if I’m honest with you. She’s already a foreman where she’s working at out of state. I know a couple of people in Gainesville who are working as welders, as well. We all keep in touch and keep our ears open.

The main thing I would say is show up every day. Definitely show up every day and keep your eyes on your goal. Sit through those recruiting presentations even if you’re months away from graduating. Those really motivated me.