Mr. Melton Henderson graduated from Tulsa Welding School back in June 1954. Melton, 87, still welds almost every day in his home shop in Claremore, OK. Melton’s son, Douglas, said that his dad has been quoted as saying, “He can fill anything but the crack of dawn, and fix anything but a broken heart.”

Thanks for your time today, Melton. Tell us how you got started in welding.

I joined the Navy in 1949 and trained as a diesel mechanic. When I got out in October 1953, I started working as a master diesel mechanic making $1.40/hour. My father worked as a tack welder for Lee C. Moore, an oil well drilling place, in Tulsa. He wasn’t trained, but he told me they were paying more than $1.40 for unskilled welders.

I wasn’t making any money as a mechanic, so I went and talked to his foreman. When I said I’d just got out of the Navy, he told me I could go to welding school using my GI Bill.

Thank you for your service. What was Tulsa Welding School like in 1954?

The welding school was in an old brick building off 2nd Street. It was an industrial area, old garages and such. It was set up with a couple of dozen welding booths, probably 6′ by 8′, with a little Lincoln generator welder and a jig outfit to tack stuff on in each booth. It had a cement floor, brick walls and plastic sheet partitions between each booth.

It was very basic, but my whole world was that booth. We worked four hours a day, just welding if I recall, no bookwork. Three weeks after starting school, I got a job with that foreman as a tack welder on the night shift. The program took six months.

Had you ever considered welding before?

How did you get on at welding school?

I liked it. It was really basic stick rod. You got to where you could hold an arc without sticking your rod. I did well. I amazed my instructor. He couldn’t understand how I was picking it up so fast and nobody else was. Most of the other guys had come out of a shop or off a pipeline. They had welded enough that they thought they could weld, but they couldn’t.

The instructor finally realized I was doing well because I had no bad habits. He spent a lot of time trying to get these guys to unlearn a bunch of bad habits. 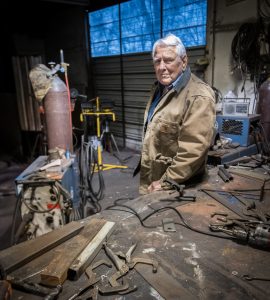 What was your first job out of welding school?

I finished welding school in the summer of ’54. I went to El Paso, Texas, and took a weld test for the pipefitters union. I got my union card and they put me to work welding at the Texaco Refinery making $3.00 per hour! The union would test you, then a company would tell the union they needed so many welders, then the company would test you again.

You more than doubled your pay. Were you excited about that first pay check?

Excited is the understatement of the year! I came home one weekend after I got the job to see my wife and went by the school. They were excited to see how I was doing; when they learned I’d gone from $1.40 to $3.00 an hour, man did they like the sound of that! They took my picture and used it in an advert in magazines like Pipeline Welder for several years. The headline was “Double your Salary at Tulsa Welding School!” I was a poster boy! There’s no substitute for fame, is there?

I understand you opened a shop a few years later?

By ’56 I was back in Tulsa. There was a lot of welding work around the country, but a railroad strike had halted everything. I went to work in a tank shop in Tulsa, then in ’57 I opened my own welding shop in Oologah, Oklahoma. I had a portable welding rig and charged $5.00 an hour. I was doing heavy equipment repair work for the companies building Oologah Dam. I also actually welded on the gates used in the dam itself. That lasted about three years; the work diminished after the dam was completed. I learned a lot there. Every time you strike up a welding machine, you’re going to learn something new.

Where did you go next?

In October ’61 I hired on at American Airlines. Their number one repair and overhaul center was here in Tulsa. I was doing Heliarc welding. We did a lot of welding on jet engines and turbine blades.

At the time, it was the ultimate place for a welder to work. Wages were good, and it was steady work. The benefits were the best in the business, and the shop was air conditioned.

As I recall at the peak of my time there, I made about $50,000 a year. That was an incredible amount of money for the time. In a casual conversation with my doctor, I learned he didn’t make that much. I spent the last eight years there as a crew chief. I discovered I wasn’t a very good boss. I used to get aggravated when people couldn’t do things, and you can’t do that!

You “retired” 30 years ago, but you are still welding today?

In 1988, at age 57, I retired from AA. They offered us “old timers” an amazing retirement package, and gave me a certificate appreciating my skills and service. After I retired, I continued to weld full-time at my home shop. I still weld, almost every day. I build and repair a lot of stuff for people. I do everything. People ask me to fix this and that, or “can you build this?”

So you’re still making money. It’s not just for family and friends?

Well, I’ve always liked money, and I know how to get it by welding. I recently converted an implement trailer into a product display trailer for trade shows. That was several thousand dollars worth of work.

Do you think much has changed in welding over 60 years?

The processes have changed. When I started welding, it was all arc welding and stick welding. You could gas weld a little bit with a torch, but stick welding and gas welding was it. Then we got into automatic welds and machine welding, where you stood back and ran wire off a spool. It was faster, bigger, stuff like that.

Then we got into Heliarc [TIG] welding. There was so much more stuff you could weld—stainless steel, aluminum, titanium, stuff like that. You could weld it before, but it looked like hammered manure.

Has welding been good to you and your family?

Welding has been good to us. It has fed my family well. We have lived in nice homes and driven nice cars. I paid off my home, put two children through college and traveled much of the world, including Europe, China and Israel. I bought a better home, paid that off, then built a better one and paid that off.

My wife Thelma and I married in 1951. We have two children and five grandchildren. I married way above myself when I married Thelma. We live on a beautiful two-and-a-half acre property in Claremore, OK, about five miles from where I was born.

What have you enjoyed most about your trade?

I enjoyed all of it, but there’s a degree of pride in doing a good job. It has to look good in weld tests. There’s pride in building something. Henderson men have always been builders. I’ve built everything: trailers, ornamental iron, security doors, spiral staircases.

What advice would you give to new students starting out at Tulsa Welding School?

You can always learn something new. Never think you know it all. At times you’ll think, “Why am I doing this?” But once you get through that, you’ll figure out why. It’s a whole lot of problem solving. There is a great degree of satisfaction in being able to do something that someone else can’t do. I would say it’s a hot job, a dirty job. But I’ve also welded in places where I was so cold I could barely hold the stick. You go a lot of places and it can be hard, but you get paid well for it, and I liked that.