Thanks for your time, Mark. What did you do after high school?

After high school I had no plans for the future at all. I didn’t know what I wanted to do, so I started working with my dad doing janitorial work. I did that for eight years, from 18 to about 26. A lot of negative things happened in my life around that time. I was partying. I was young. I got in trouble with the law, so I had a really tough road that I was walking. The odds were stacked against me.

At 26, I knew I needed to put my big boy pants on and start supporting my family. I’d had a kid at 19, so I needed a real job, a career that could be beneficial where I could support a family. I started pursuing an industrial career because I’d seen my uncles—they’re electricians and carpenters—have success in a trade. So, I went into the metal industry and started working as a helper for plasma cutters. I swept the floor and helped the guy load his table. After about a year, I became a material handler. I’d take the finished material back to the welders and they would weld it up. That’s when I first learned more about welding.

Was that the first time you’d been involved in welding?

Yes. I knew nothing about welding other than it involved heating metal together, but that was it. When I was younger, I thought a welder was a guy who’d go blind real early. I started talking to that welder. He showed me the ins and outs, told me how welding worked, and then we got into how much he was making!

So, that’s what caught your attention?

Once I found out he was making double what I made, I was intrigued by the money. That was the first thing that got me. The second thing was how easy it seemed and how safe it was. This guy had been doing it for 40+ years.

I asked, “How have you been doing it for so long? I thought welders go blind after a while.” He said, “No, we wear welding helmets! The ones that go blind are the dumb ones who look straight at the sparks with no hood!” That’s when I realized there is more to welding than I thought when I was younger. 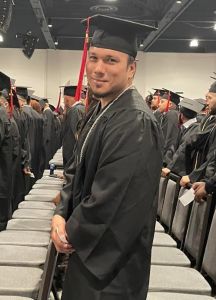 So where did the idea of welding school come from?

I asked this welder, “How do I go about being a welder?” He said, “Go to Tulsa Welding School, man. That’s where I started. They have a great program. Just go talk to somebody.” So that’s what I did, eventually. I had it in the back of my mind, but I continued working at the shop for a couple more years as a material handler.

I worked my way up to two more dollars an hour, but that was my cap. I wasn’t going any higher than that. Then COVID-19 hit in 2020, and the company went under. So, after COVID, I thought, “I’m going to go to Tulsa!” and I started welding school in summer of 2021.

What did you enjoy most about your experience at Tulsa Welding School?

I was learning something different. I was figuring stuff out. I wanted to be in the shop every day. I didn’t want to be in the classroom, which we were one day a week. It was a never-ending process of learning every day. there was always something. You couldn’t figure it out within the five hours that you have there in class, you need more time than that. If I could have stayed in there 18+ hours a day, I would have.

Were you able to stay and practice for a little extra time?

How was the program? Did you get frustrated?

There were days that I left in a bad mood because I couldn’t figure something out. When you’re frustrated, it gets worse. But once I got home, rested my brain and was calm, I actually started working the problems in my head. The issue was then that I was solving the problem in my head, but I couldn’t go to the shop to work on it with my hands. I had to wait till the next day! There were a lot of things I had to figure out, and it was not easy at all. You have to work for it!

Congratulations on persevering. Where are you working now?

I’m going to be an iron worker. I’m actually in an Apprenticeship Readiness Program right now called ARP/MC3. It’s through the Gulf Coast Built-Rite Partnership. Career Services at Tulsa called them because I said I wanted to work on framing skyscrapers for commercial and industrial buildings. This program is getting us ready for apprenticeship school. After that, I’ll get my Journeyman license and then be able to go on construction jobs with the union. It’s a great program, and it’s all because of Tulsa Welding School. Tulsa got me here. I just told them my dreams and they had the connections to make it happen.

Explain more about this ARP/MC3 program.

The ARP/MC3 is a three-week program that gives me the opportunity to transition into a Department of Labor Registered Apprenticeship Program, which is an earn-while-you-learn program. After I’m done with this class next week, I’ll work 40+ hours and attend apprenticeship classes two nights a week, earning college credits while also getting healthcare and pension benefits for four years. I’ll get direct entry into the union because I’m going through this ARP program and because of my TWS certifications. They’re going to start me as first-year journeyman instead of a pre-apprentice.

So, you’re going to learn the specifics of becoming an iron worker?

Yes. They’re actually going to pile onto what I learned at TWS and teach me the ins and outs of how to weld iron and put it all together in steel structures for skyscrapers.

Everything that I’ve learned so far is a plus, but they’re now going to teach me exactly what I need to know for those specific things.

Reminds me of the 1930s NYC photo of the skyscraper ironworkers eating lunch on the iron beam!

That’s going to be me. Ironically enough, my uncle had that picture with the guys sitting on the beam up the skyscraper. I always thought that photo was so cool. How are they up there? That’s so scary. I thought it’d be really cool to be one of those guys. My uncle explained how that all worked, what they were sitting on, and how things work with framing and rigging. That’s kind of where the idea started, I guess.

So that’s obviously your ultimate goal—your career plan—to be an iron worker?

My ultimate goal is to be a Singletary contractor for the union. I’m going to work from Journeyman to Foreman. I then have to get three years of training and experience as a Foreman, and then after the three years of being a foreman, I can go ahead and be a Singletary contractor. I can get my own contracts. They will provide the workforce for me, so I don’t have to worry about my reputation or anything like that. So that’s pretty much what I want to do, start my own business!

I guess it would be the knowledge of knowing something that I can teach somebody. A lot of people think of welding and say, “Oh yeah, the guy with the stick that makes the sparks.” Well, I can teach them the fundamentals of how welding works and what we build. Welders, as a collective, are in all facets of life. Anything you build with metal, a welder puts it together. I say that we’re basically engineers’ heroes! The engineers make the blueprints, but we’re their heroes because we can put their ideas together. We build them. It just excites me when I talk about it, and Tulsa taught me the fundamentals from the ground up.

I like this quote. “You cannot break down what can’t be broken.” Just don’t get overwhelmed. Don’t get broken. It’s going to be hard. If anyone tells you, “Oh, this is easy, man. We’re about to be making a whole bunch of money!” they have not experienced what it is to go through Tulsa Welding School. When you start going through the program, that’s when you start seeing people really understand how hard it is to be a welder. But don’t give up. My main thing was to stay positive. You will fall in love with the craft, and you will figure out simple things that you didn’t know were so simple. So just stick with it, tough it out.