Thanks for your time, Jakob. What did you do before Tulsa Welding School?

In school I was a big sport’s guy. I played football from second grade, and I started to play golf competitively in seventh grade. By ninth grade, I decided I liked golf more and was better at it. I wanted to take myself to the next level. I went to play golf at Howard Payne University in Brownwood, Texas, pursuing a biology degree. I did that for a year, but it was a super small campus, half the size of my high school. Though the golf was fun, and it was something I told myself I always wanted to do, it put me off the college experience, so I came home. My dad owned a moving company, so I worked for him for a year and a half. Then a high school friend who was starting a company asked me to help. We ended up running a landscape company for four years. It was a lot of fun. I learned a bunch. It was not something that I thought I would be doing, but that’s where life took me. I was still in Austin, close to home, and we were making good money. 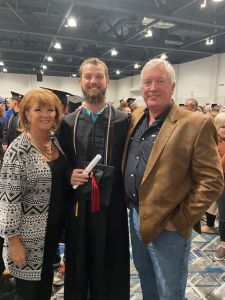 Where did the idea of welding come from then?

I was on vacation with my family. They asked me how work was going, if there was something else that I wanted to do having been landscaping for a long time. It got me thinking, do I want to do this forever?  I needed to do something to elevate myself, to take the next step. I had been a three-year AG Mechanic student, the welding program in high school. I was good at it, but I didn’t think of it as a career back then.

We had been visited by a rep from Tulsa Welding School every year at school. But as a kid, it’s really hard to build the picture they’re presenting to you. Plus, I had other things on my mind all already, golf was a big deal to me. So, I looked into it, and you read these success stories. You look at the stuff the welding guys have on social media. It’s a powerful influence. Knowing I had a bit of skill from high school, I just pulled the trigger and applied. From when I told myself I was going to do it, I was in class two weeks later.

Did you sign up for the pipefitting course when you enrolled, or add it later?

There’s a really good vibe there. You walk into this vast welding lab, and you know there are all these people trying to better themselves. You meet different kinds of people. Maybe there’s a day when you stop to help a friend who isn’t as experienced, or not doing as well as you. To be able to share the love around with people, it’s fun. There’s a sense of family. There wasn’t a minute that I didn’t enjoy myself.

Did you have any moments of frustration?

I would say the system they have for students is probably as good as it can get. Of course, there are times where you have an off day, which is totally normal. Days when it’s just not quite happening for you, but you just got to sit there and look at yourself and think, “Am I going to quit, or am I just going to push through it?” During the hard times is when you probably learn the most. I just gave it all I had.

So, where are you working?

I work for All Current Electric. I started this week. They’re nationwide, but they only have one fab shop, which is here in Houston. They have numerous warehouse locations where it’s just part distribution.

What are you doing for them?

I’m a welder and I work with aluminum, stainless-steel and carbon steel. We’ll get orders for however many units. They’re these metal box/enclosure type structures of all sizes, and we’ll knock them out one by one. This week I made a metal cabinet system out of aluminum. I made a smaller cabinet that will hold electrical components. I’ve made two stainless-steel boxes about the size of a birdhouse that hold cameras. It’s a multipurpose facility. They get custom orders, but they also have a line of products that they sell.

Not a bad first week! Congratulations. How did you get the job?

I didn’t have a job immediately lined up coming out of school in December, but I did have people I was talking to, connections I was trying to orchestrate. I got to enjoy Christmas and New Year’s, and then I got a call on December 26th from All Current. He’d called TWS looking for a welder and they referred me. He called and I went and took a weld test the next day. I just started this past Monday, January 17th.

Are you happy with what you’re making starting out?

Well, what I did was this…in my weld test I’ve obviously just delivered a certain grade of product. Going off of that quality I’ve delivered, if it’s not all perfect, you can’t ask for the world. So, during my interview post weld test, I asked for $20 an hour and I got that. Though I plan to make more later on, I think that’s a really good start. I think that’s very fair. I work 10-hour days and although I know I’m at the bottom of the ladder, it almost doesn’t feel like it. I’ve kind of worked myself right into the mix already.

Are you getting any overtime?

It’ll be a 50-hour week, but we are at a slow time right now because we’re waiting on materials to come in to fulfill more orders. So, when it gets busier, I’ve been told that being there until nine or ten o’clock won’t be unusual, and maybe even having to go in on a Saturday and work an extra day. Anything over 50 hours would be overtime at $30 an hour – sign me up for that!

I’m kind of a loyal employee. I really wouldn’t mind sticking it out here for a while. I could definitely see myself doing at least a one- or two-year stint here. If I can make $200/day while learning my trade and getting better, that’s not a bad place to be. There are two other welders that work with me and they’re about 40-years-old. They’ve been around the block, they’re very knowledgeable. If I ever have a question, they can help me immediately. I sure wouldn’t mind learning more from them. They’re very smart guys

But that being said, having graduated near the top of my class, it’s a bad idea for me to not keep my eyes open. Maybe even shoot a little higher for myself. So, I’m still kicking out Indeed applications.

I left the football team to jump into golf, partly because as much as I love being on a team, I feel most effective by myself. Welding is one of those things that, for the most part, it’s just you and your welder. I love that. I also love beautiful art and when you’re good welding, it just looks like art. I’m in love with it.

Most certainly.  met numerous good people that I will definitely continue friendships with.

What do you say to people thinking about going to TWS?

Drop what you’re doing and go for it. It’s more fun than you could ever think. Whatever date you signed up for, pick a sooner date. If you’re going do it, this is something that you’ve just got to dive into. There is no time to waste because the paycheck is waiting for you on the other side, and it’ll astonish you.

Showing up is half the battle. I was very adamant about being there every single day I could, learning all I could, and trying to be better than I was yesterday. I think I missed maybe four half-days of school. Most people have a hard time either showing up or staying for the full class. They don’t have the drive or attention span to sit there and learn for that long – it’s only five hours a day and when you’re in the welding booth, time just flies, you won’t believe it. If you can’t suck that up, I don’t know what to tell you!