David, 21 from Jacksonville, Florida, is a graduate of the nine month Electro-Mechanical Technologies (EMT) program at Tulsa Welding School, Jacksonville. He graduated on January 28 2019.

Thanks for your time, David. What did you do after high school, before TWS?

After graduating in 2016, I lazed around for a while before going to work for Belk, a department store at The Avenues Mall in Jacksonville. I was there for three or four months before I started in construction, framing in February 2017. I did framing for two years and actually did that while going to Tulsa Welding School. I took the risk of losing hours to go to school, but I knew it would be worth it.

What made you decide to go to HVAC school?

Honestly, I mostly did it for my parents, to make them proud of me, but I also wanted to choose something that I liked. I knew that I liked electrical stuff, and this is the best thing I could do at the best school. I also needed to get out of the framing business. With this education, I have a lot more choices, a lot more opportunities, and so many things I can fix, repair, and rebuild. I can do anything.

Were your parents pressuring you to go to school?

No, not at all. They said it was up to me, but honestly, it was my grandpa who was mostly the one telling me I should do it. He wasn’t forcing me or anything, but the more I thought about it, I knew I had to get out of construction. I needed to make more money, so the best thing I could do was go to school. It took me a little longer than it should have because I left, but after I while I knew I had to take advantage of it, and go back to finish it.

It was probably the environment. They made me feel comfortable, and there was a lot of hands-on help from the instructors. I really liked that; hat was probably the best thing. If one student just didn’t get it, the instructor would spend time helping that person. I really got into the wiring, but I paid a lot of attention to the HVAC. I probably should have paid more attention throughout, but that was my fault.

How does the hands-on time work?

We would go through and read a couple of chapters the first week or two of each phase, then after that, it’s all hands-on. Of course they want you to know what you’re doing before you do it yourself, just because of the safety aspect. 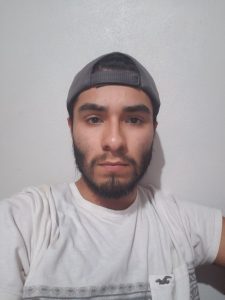 I started with Hammond Heating & Air Conditioning four days ago, three weeks after graduation. Right now I’m a helper, helping with installations. I just worked on two installations this week, just connecting the air ducts, masking them, taping them, nothing too big yet. They’ve got to get to know me and learn what I’m capable of.

The TWS career services team helped me. They got me the interview. In fact, this was my first and only interview after graduation. I thought I was going to struggle, but my skills met their standards.

It’s actually a dollar less than I was making framing, but it’s way more hours, so that will more than make up for it. I know that after a couple of months, maybe half a year, I’ll be able to boost up higher from $12 an hour. It’s not the best, but I was making $13 an hour framing and I was able to live off that, and this is more hours. When summer comes along, it will get way busier again. That’s what all the guys are saying.

The company said it could take about five years to get where I really want to be, making the big bucks as an installer. But I was talking to a couple of the guys here. They’re really friendly, and they said it could take me just two to three years if I really put my head down and get into it. So that’s what I’m hoping for. This is a good place to be, to start my career. I prefer to work in a good environment like this, where I can have a good connection with the guys and still get the work done. It’s a family company of about 20 men. I’d prefer to stay in a better environment like this than just move somewhere to get paid a little more. I think I’ve got a good opportunity here. I want to learn as much as I can

I would love to one day. I think everybody would, but it’s the knowledge you need. I would have to wait a few years for me to really know what I’m doing to even consider that. I want to learn everything I can, learn as much as I can about business. For right now, I’m just taking it easy, learning everything I can.

What do you think you’ll enjoy most once you really get started?

Probably the installing because it’s up in the trusses. Having been in construction, framing, that’s nothing to me. It’s easy work because I’m able to maneuver quickly, more than the other guys. It’ll be hard work in the heat, but that’s fine because I love a challenge. I try to challenge myself every day.

Your family encouraged you to do this. What makes you smile when you think about that?

The fact that they know that I made it. I’m taking advantage of the opportunities that they didn’t have. That’s probably the thing that makes me the happiest, knowing that I made them happy and I can even help them out with the knowledge that I have.

Do you still live at home?

Yes, I still live my parents, but now I have a stable job with stable hours, I will look to move out in a few months, once I’ve saved up. Construction wasn’t that stable. That’s what I was looking for, to get rid of the habit of missing days, to get something more stable.

Did you make some lasting connections at Tulsa Welding School?

Not really. Honestly, I really didn’t talk too much. If I had focused on making friends, I wouldn’t have paid attention in class.

I tell my brother, Kevin Hernandez, this just about every day. He is going to Tulsa Welding School after he graduates high school this June, but on the welding side. I tell him to do exactly what I didn’t do: pay attention to the instructors because they know what they are telling you. If you find it boring, you really have to pay attention. Read the chapters. Don’t just skim over them. That’s mostly what I did and I wish I hadn’t. I had to go back over things because I didn’t remember this and that. Take a lot of notes, too. Everybody has to learn their own way, but writing stuff down is how I remember.