Cody, 22, was born in Tulsa but grew up in a small town called Vian, Oklahoma. He graduated the seven-month Professional Welder program at Tulsa Welding School in December 2018.

Thanks for your time, Cody. Share your journey to Tulsa Welding School.

I joined the U.S Army at 17. I finished my junior year in high school, then went to basic training. I came back and went through my senior year, graduated, and then went back to finish up my training. I only do it part-time, one weekend a month, so I had to work as a deputy sheriff at a jail to pay the bills. But in 2017 my unit got activated, and I spent the entire year deployed in the Horn of Africa.

Did you pick up welding when you got back?

No. When I got back from Africa in November 2017, I was between a rock and a hard place. I was working at the jail, but had my mind set on becoming a police officer. I’d put an application in to Fort Smith Police Department, but they’d lost it while I was away. It was like a smack in the face when they told me I’d have to start the process again. I told them to forget it, that I’d go find something else.

What was it that appealed about welding?

I’d always had welding school in the back of my mind since seeing a commercial for Tulsa Welding School. I knew a few welders, too. They made good money and didn’t appear to have to work too hard for it. I knew it would be hard to learn, I knew it was going to suck for me, but I like building stuff. There’s something about looking at a finished piece and saying “I did that.” I knew I’d learn to like it.

Did you have any welding experience at all?

I’d never picked up a welding torch before the day I started at Tulsa Welding School.

What did you enjoy most about the school?

I enjoyed the instructors. They are angels. They do a good job training people to be welders, but I have to say you’ll only get out what you put in. I put in a lot. I was there afterhours and was often the last to leave at 11:30 p.m. I was just trying to get better.

Who do you work for now?

I work for a company called Phillips Tank & Structure. I’m doing stick and flux welding at the moment. I’m so busy with repair jobs that I haven’t had the opportunity to build new tanks yet

The career services team at Tulsa are really good about providing leads for jobs. They told us to put in applications for all these jobs they were finding. I put in an application for this company, Phillips, out of Pennsylvania. A friend of mine had told me about them. I had zero expectation of hearing anything back. I had no experience with the work they do. But I do know how to weld, and that was enough to get my foot in the door. There’s a spot on the application where you put down how much money you want to make an hour. The guy I spoke with told me that I’d be making more than what I asked for! 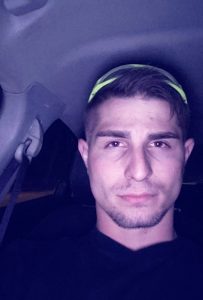 So where are you working?

It’s a traveling job. They even have people overseas. They have so much work, it’s not even funny! I started in Indiana for a week. Then, in mid February, they sent me down to Mobile, Alabama. A crew down here needed a welder. I’m working at an asphalt terminal, repairing asphalt tanks. I’ll be here until June.

So do you get any time at home?

It’s kind of iffy! I got lucky and have some time at home right now, but you never know, it’s so busy. About two weeks prior to this job ending, they’ll tell me where the next job is. It’s not a hassle to get some time off, but when you’re building a tank, the crew has to be there. They need the hands, they need people to be at work and get the job done.

Are you happy with your paycheck?

Oh yeah! I’ve never made more than $400 to 500 a week before. I had a lot of stuff crammed into my first check. I had classes I needed to do, and they paid me for doing them. They pay me for my travel. It was definitely a life-changing experience when I got my first check. In just my first six or seven paychecks, I have paid down 25% of my school debt. I’m steadily paying it off, as well as paying my normal monthly expenses. I’m going to be out of debt by the end of this year. Then I’ll start looking for a new vehicle.

I just want to be successful, and in the near future to be able to help people just like me who had never touched a welder. There are people who start here who have never held a stinger or been to school. The other day one of the guys told me that my foreman said he wished he had six of me with my work ethic and about 10 years of experience. I love the people I work with, and they love my work ethic apparently.

I don’t want to sound like a broken record, but I enjoy the money! My brother went into the Army on my advice, but he’s not liking it. I told him I screwed up with that, but he needs to hear me out on welding. I Facetimed him the other day and he asked me how much I make. I told him, and he said, “That’s not bad for two weeks.” I replied, “Michael, that’s one week.” He is going to welding school in Texas when he gets out later this year.

What advice would you give to people considering Tulsa Welding School?

After about four or five months, it begins to get harder. You don’t have enough time to do what you need to do, and it can get discouraging and stressful. The best advice I can give is to finish what you start. I’ve seen guys not stick with it, not be able to get a job and be stuck with a loan for about $20,000; it’s really not smart to do that. They have a good career services team at the school. They will find you a job. Stick with it. Once you embrace the suck of working under the hood, it’s going to pay off.