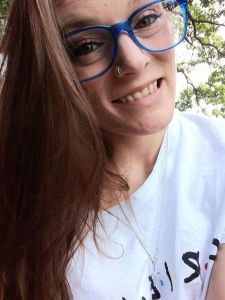 Thanks for sharing your story, Cassie. Tell us what you did before welding school.

I had two kiddos—my daughter is 12 and my son is 10—and I worked at Whirlpool for four and half years building stoves. I was an assembler, then became a team leader and managed my own crew. I went through a very hard divorce, then had some health issues that landed me in hospital fighting for my life.

So sorry to hear that. We’re glad you’ve recovered. Where did the idea of welding come from?

After I got out of the hospital, my father was in North Carolina working as a Quality Control Inspector. I needed a fresh start after all the trauma I’d been through, so I went to North Carolina and started working for Fluor on their Novo Nordisk plant. I got hired on as a pipefitter helper and fell in love with every single thing they did—the pipefitting, the welding, everything. It was a three-year project, but I was there for the last nine months of the job. When I got home, I obtained my GED and enrolled in Tulsa Welding School.

Did you get to work with your dad?

A little. He came and inspected everything we did. That was awesome because I’m really following in his footsteps. My dad is my best friend. He has helped me so much, in every aspect of my life you can imagine he has saved me. I’m very blessed to have him as my dad.

The big question is, did he inspect your work tougher than everyone else’s?

Absolutely! I didn’t get any free passes!

Did you do any welding early in your life, with your dad or in high school?

I was exposed to it, but never got my hands on it. In high school, I enrolled in a nursing vo-tech program.

What was your favorite part of your Tulsa Welding School experience?

I’d say the instructors and staff. No matter how hard it was, or how discouraged I got, the instructors were always there to help me learn and get better. I was often in the bathroom just bawling my eyes out, but I never gave up because of the support that I had from the people within the school. I’m still in touch with a couple of ladies at the school; amazing women who still check in with me. I’m very thankful for them.

You mentioned crying. Did you ever think about quitting?

Absolutely. There were more than four or five times where I went out to my truck and called my dad. He knew what I was calling for, so he would just let me rant then tell me to breathe and calm down. I wanted to give up. I wanted to quit, but I wasn’t going to. There were plenty of days I just felt defeated, but whenever the end of the day came and I got in my truck knowing I hadn’t quit, that was accomplishment enough for me. The more I progressed, the more excited I got! I never understood the negativity from some people about school, but they were the people who didn’t want to put in the work.

How was it being a female in a predominantly male environment?

I did get negativity from some men, even outside the school, even within my family. I have four older brothers and three of them are welders; they all laughed at me when I enrolled at Tulsa Welding School. “We’ll see how long Cassie lasts!”, they all said. They felt it’s not a woman’s place. I’ve always been the kind of person that if you tell me I can’t do something, I’ll do it! Women are not weak, but when you put a woman in a man’s world, you can get a lot of negativity. Some people were welcoming, but I had a few classmates who told me I didn’t belong there. But I let it flow in one ear and out the other because anything is possible when you set your mind to something, regardless of what anyone says or thinks.

Are your brothers on board now?

They’ve got nothing to say now that I’ve graduated! They are very proud of me because I proved I could do it. My dad said to me, “Going to Tulsa Welding School, having the time you had in the classroom, means you have more knowledge than any of your brothers ever will. They just go in and grab a welding machine. They don’t know the science behind it, how it works, or why it works in the way it does. You do.”  When my dad told me that, it lifted my spirits because I also realized it also means I have the potential to earn more than them once I get some more experience.

How was going back to school in your 30s?

Honestly, I was a little intimidated. There were a lot of young people, straight out of high school. But after my first couple of days, I saw there were people my age and older than I was. There was a guy of 62 and another at 55. That put me at ease because I realized that it’s never too late to start.

You graduated a couple of weeks ago. How’s the job hunt going?

I have a couple of job opportunities I’m working on. One is for Arcosa in Tulsa. I have the recruiter’s direct number, so I’m going to call her. A very good friend of mine also works for Valmont Industries. He told me to go online and fill out my application and let him know. This gentleman spent 17 years in prison; he’s only been out four years and he’s already purchased a four-bedroom house on three acres, and a brand-new motorcycle. I put the Valmont application in today, so I’m hoping, praying, and keeping my fingers crossed that that one works out for me. But any job that helps me start my career will be a blessing in itself.

Are you working with the Career Services team at Tulsa?

I saw Shelby in Career Services last week; she helped me with my résumé and fixed a couple of things. She also gave me a couple of job leads in Oklahoma City and Alaska, but I’m a single parent, so I can’t just load up and take off right now. Shelby did say that when I get my applications in to Arcosa and Valmont, to tell her and she will call the companies and spice me up a bit, put in a good word for me. Both companies hire Tulsa Welding School graduates, so they have a relationship with Career Services.

Do you have a career plan?

Absolutely. Eventually, I plan to get my CWI [Certified Welding Inspector] license through the AWS (American Welding Society) and become a QC Inspector like my father. You have to have so many hours of welding in order to even start taking the classes to become a welding inspector. The advantage I have, having gone to Tulsa Welding School and having worked on that Fluor job in North Carolina, is that time all counts towards the requirements of the AWS. Somebody just starting out would take three years to meet those requirements, but it should only take me another year and a half. After the kiddos graduate, I would love to be on the pipeline because I loved the pipeline.

What is it you enjoy most about your new trade?

First, defying the odds to get here, and second, it gives me a challenge every day. You never know what you’re going to be working on, unless you get into a shop where you’re doing piece work, which does appeal to some people, but not to me because I like change. I like being able to do something different every day and being able to grow from doing that. I can always progress in this career; it’s about evolving and being the best that I can be as a welder.

Not really. I am a friendly person and I talk to people, but it was difficult for me, as I had to rephase a couple of times due to some health issues. I also chose to rephase one class again because I wanted to be more confident in the process. I wanted to walk out the door confident in what I was doing, and if that meant redoing a phase to increase my confidence, so be it.

What advice do you have for new students…for them to be successful at TWS?

Never give up, no matter how hard you think it is, or how hard it gets. You are capable, you are able, you can do it. Just give it all you’ve got, and you will succeed.

Chat With Us
Apply Now
TWSTC Houston - All Classes Virtual on 9/14.Get More Info
+