Banks, 19, is from a small town just outside Charlotte, North Carolina. Banks graduated from the Professional Welder program at Tulsa Welding School in Jacksonville in February 2020.

Thanks for your time, Banks. Did you go to welding school straight out of high school?

Yes, maybe two or three weeks after graduation. I welded in high school and enjoyed it.

Why did you decide to go to welding school?

I knew I couldn’t sit in a classroom for four years and do well. I thought that Tulsa Welding School was probably the fastest way I could get in and out of a program, and go on to make some good money.

How did you discover Tulsa Welding School?

How was moving down to Jacksonville at 18?

It was five hours away from home, but moving away didn’t really bother me. The first month I got down there, I’m not going to say I wanted to move back home, but it was a little weird adjusting. But it was definitely the right move.

From the minute I started I knew that if I had a question I could ask. They’d answer it, and even show you face to face, one to one, to make sure you understand. I also liked the fact that I could go back to school at night and have plenty of time to practice. Practice is important in welding; you’ve got to screw up to learn what you did wrong. One thing I noticed with the school is you’ll get out of it what you put into it. 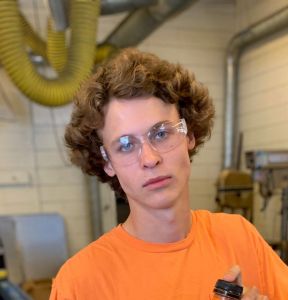 What class/shift did you attend?

I did the morning class, and I literally went back every night to practice, starting in phase two. During phase one I was kind of scared. I was new. I didn’t want to go in and get kicked out of a booth. Once I found out that they didn’t care, that booths were open, I went back just about every night. I wasn’t working. I’d saved up some money, so why not go back and practice? I knew some night class instructors, who weren’t my teachers, because I was always there asking them questions! You can also use all the supplies that you want. You can weld all day and get charged the same amount.

You graduated a couple of months ago. Where do you work?

I work for Stellar Energy. I got hired in mid-March, but the hiring process took a while because of the virus. I started work April 3. It’s mainly pipe welding. Work is a lot different from school, but it’s fun. I get to do something different every day and it’s very rewarding. I get to work in some awkward positions, where I’ve really got to play around with it. It takes a little longer than just doing your average pipe, but it’s fun. I do enjoy it.

The instructors saw me come in every day. They knew me, they knew I had a good work ethic and I could weld. Two instructors had worked for Stellar and one of them got me the job. I had three companies that came in for Phase 11 that I could have worked for, but I didn’t want to. I wanted to travel.

Phase 11 is an extra phase that you can sign up for. It’s when the school knows that some companies are coming in soon to hire graduates. They give you extra training for their weld tests. The instructors knew that there weren’t any travel companies coming, and they knew I wanted to travel.

So where does Stellar have you working now?

It could have been anywhere in the eastern the US. I’m from North Carolina and for my first job, they’ve got me in North Carolina! But a different part. I’m building a big extension for a freezer on a food line; their freezer is not big enough. It’s a long process, probably going to be four months. 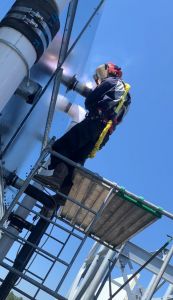 Were you happy with your first welding paycheck?

For a 19-year-old I’m doing just fine. I’m making a decent bit of overtime. When you travel there really isn’t anything to do on the weekend, so I’m working six days a week, 10-hour shifts. It’s pretty nice. Occasionally it’s 7/12s. Traveling you can save money. They give you a per diem to eat and they pay my hotel, so all the money I make I save.

My plan, right now, is to do this traveling work for at least three to four years and save up a good amount of money. Maybe longer. I won’t know until I get there. Then after, maybe I will go and weld in a small shop. I’ve got some friends who have shops I could work at. That way I can stay in one place, get a little house and not have big house payments. Welding is fun, but if you’re in the field traveling, I can see how the body will get a little worn out. Maybe I’ll be a weld inspector one day.

I made some of my best friends and that school, and I have some of the best memories because of those friends. We used to all go out to eat on Tuesdays together. It’s cool. I have friends all over now. We have a group chat. We all check in with how we’re all doing and stuff. A lot of them are at places that are hiring. That’s why when I’m done with traveling and want to settle down with my own place, I can maybe get on with one of them.

What did you enjoy most about being a welder?

That not a lot of people can do it, that it looks cool, and it is fun! Welders are also needed, which is why I’m 19 and out doing this. I’m 19 and working with a 67-year-old. We’re doing the same thing. As long as you can do the job, you’re not judged. It doesn’t matter who you are.

What advice would you give to students considering going to welding school?

When you’re making mistakes, doing the same thing over and over again isn’t going to fix it. Ask what you’re doing wrong and why. If you’re doing something wrong, listen to the instructor and try to understand what they are actually saying. Listen to them, because some kids don’t. Think about what they’re saying. Ask them why it would work better a different way. That way you don’t keep trying to do the same thing the wrong way. Some people are hard-headed, that’s how I was. But you’ve got to think why stuff is going wrong. That will save you a lot of time and frustration. Ask for help if you need help. One last thing I’ll say, and you’ll hear a bunch of people say it…”If ya aint’ burnin’, ya ain’t learnin’!”