Ashley, 27, from Colorado, graduated from the Welding Specialist program at Tulsa Welding School & Technology Center in Houston in May 2019. Ashley moved to Houston in May 2017 when she decided she needed to change her career path.

Thanks for your time, Ashley. What made you choose a career in welding?

After high school, I worked in maintenance. I did some welding in that job. I went to school for welding for a little while a few years back, but I dropped it and switched to study another career field: sheet metal work. I was installing duct work, stuff like that, but there were a lot of layoffs. I’d been working labor jobs since and was not paid well. I wanted something that paid more than $10 an hour. I did a lot of thinking and realized, “Wow, I was almost a welder once. Why not try it again?”

What made you quit the last welding program in Colorado?

It was a two-year program, but I felt two years was too long. So after about six months I switched.

Congratulations on your TWS graduation. Did you consider the pipefitting program too?

I enrolled in the Welding Specialist with Pipefitting program, but I graduated from the welding program.

Because an employer came to the school and gave us a weld test. I passed and got the job, so I decided to drop pipefitting and go work for them.

I enjoyed the hands-on part. Even though each phase is only five weeks, which is very short, I felt like it was still at my own pace. It was about how fast you could pick up what they put down. If you couldn’t get it, the instructors were there to help you. They’d try to teach you in a way that you understood, so that you can complete the project needed to complete the phase. The combination of the hands-on time and the instructors’ help made it work for me.

What did you enjoy most about the program itself?

My favorite part was the TIG welding. I really like TIG welding because I have so much control with it and I can make the bead look pretty. I found it relaxing.

Was it an advantage to have some done some welding before?

I’d say it helped a little. Knowing the safety part helped, and being able to strike an arc stick welding helped, but I still learned a lot. 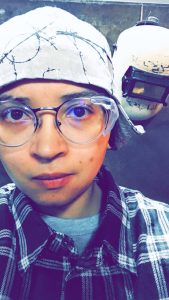 You graduated just a month ago. Where are you working?

I work for Sabre Industries in Alvarado, TX. They build support structures for industries, including electric transmission and distribution, wireless communications, and more. After my training, I will be working overnights Monday through Friday. It will depend on how much work they have, but it will usually be 50 hours a week–40 hours plus ten hours overtime at time and a half.

When did you start, and what are you doing for them?

I started two weeks ago. I had a couple of weeks after school to earn some money so I could afford to move to Alvarado. It’s about 20 miles south of Fort Worth. Right now, I’m still in their welding school. They are showing me their process, how they weld their things. I’ll be doing metal-core welding. It’s like flux and MIG, but it’s a different wire, a different electrode. They don’t teach metal-core at TWS, but it’s the same thing. I have another week of training, then I’ll be moved to the floor welding notches and bolts onto poles to start with, until I move up.

How will you adjust to overnights?

I’m used to working overnights. My last job was a 12-hour overnight shift, so it’s no problem. I think I’ll like welding overnight because it will be a lot cooler, especially in the summertime!

Are you happy with the money you’re earning?

I got my first check yesterday! I looked at my check and thought I could pay this bill, that bill, this bill, and still have enough money to have some fun. They hired me on as an overnight welder, so after my training when I move to the floor, I will also get a shift differential added to my wages.

I’d like to be a welding inspector in about five years, once I have experience. Sabre is a great company. The benefits are awesome, and there are promising opportunities to move up. I want to stay with Sabre if I can. My ultimate goal is to stay with Sabre for five years, get my welding inspector license and see what Sabre does with me. If there’s an inspector position open here then I’d like that, and if not, I’ll move on.

Watching myself improve. Every time I lay a weld down, it’s always better than the last. I like making pretty beads, and I like having people come to my booth to look at my welds and say, “Wow that looks good!” or ask me, “How did you do that?” That’s what I like most.

How have you found being a woman in a predominantly male environment?

I’ve worked in a lot of male-dominated environments, and most of the guys are pretty cool actually. But there are a few who might say things like, “This is a man’s world. Women don’t have any place here.” But my answer to that is it’s almost 2020, times have moved on and I think you should, too. I don’t take it personally when guys say stuff; I say stuff, too. The best thing to do is be assertive, don’t be arrogant. Be humble and you’ll get by easily. It helps to have thick skin. If someone makes a comment, I give them a look and walk away. It makes them think about what they said!

There are a few people I’ll stay in touch with. I’ve added a few people on my social media , stuff like that. There’s one guy who took the test for Sabre. He passed, too, so we both got the job and now we’re roommates. We came here not knowing anyone but each other, but we’ve become really good friends.

My advice would be to try to make school a priority. The training you get at Tulsa Welding School is what’s going to help you make you money in the long run. I had to combine school with a job, and it was really hard balancing school and work. Seven months seemed like a long time, but in the end, it was definitely worth it.