Thanks for your time Nicholas. What did you do before enrolling at Tulsa Welding School?

It’s kind of a crazy story. Having been homeschooled I tried college early – at about 15-16 – but it wasn’t really for me. It wasn’t a bad thing. It just wasn’t for me. I ended up with just my GED, moved out and got to work at around 17. I lived in New Jersey and got regular jobs here and there. Eventually, I got a job at a grocery store and ended up in loss prevention. Then I met a woman who was VP of Surveillance at a casino in Delaware so I started working there.

How did you end up back in Florida from Delaware?

I got a job offer back in Jacksonville. I thought it’d be a good idea to move back home, but the job fell through. I was kind of panicking. I’d moved 900 miles and needed work. I first got a job with a temp agency. Then I got back into surveillance. But I realized I wasn’t doing something that made me happy.

So, how did you discover welding?

I’ve always liked building things, the mechanical aspects, but I’d never welded anything. Each time I built a bicycle or anything like that, it had to be bolted together. I finally decided I had to give welding a shot, so I decided to take a tour of Tulsa Welding School. I told my wife, Allison, that I was just going in to get some information and check it out, but I came out enrolled in the program with a date to start!

How did that happen?

There was no pressure; it just felt right. I realized it was the kind of place where you get out what you put in. Over the years I’d worked multiple jobs to make more money, then I found Tulsa Welding School. 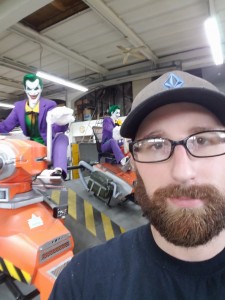 Did you get a scholarship?

I applied for all the s

cholarships & grants I could find, anything like that. I was given the opportunity to write an essay about why I wanted to go to Tulsa. After it was all said and done, I ended up paying about half of what the tuition would normally be. That was a great thing for someone like me without solid work. The school helped point me in the direction, but you have to take the initiative. If you just spend 10 minutes at the computer looking, you’re not going to get far. You have to put some effort into it.

What did you enjoy most about the school?

Just the environment…it’s very carefree and relaxed…but at the same time you better do your work. Not too long into the program, I realized that it’s very hard to work 40/50/60 hours a week and go to school. My wife took on more hours, and I quit my job so I could spend more time at school before and after class. I wanted to focus completely on school while I was there. Because I was putting the effort in, I was actually offered a job at Tulsa controlling how many welding rods the students got. I was there a lot.

Tell us how you got your job after graduation?

You might not believe this, and it’s kind of a long story. During the last few weeks of school, I was taking tests, practicing, doing résumés, sending them out – basically doing everything I needed to do to prepare for graduation. My grandmother has lived in Jacksonville her whole life, and she told me I needed to send my résumé to Sally Corporation – not the hair and beauty supply company by the way!

I looked them up and realized it’s a company of 20/30 people who are the best in the world at what they do. As soon as I realized that they build animatronics, dark rides, and theme park attractions, I figured I had no chance. But I talked to a few instructors who all said, “What’s the worst they can say – no?”

I realized they’re not just a fabrication or pipe welding company. They’re probably not looking for a pipe welder or someone who’s the same as 1000 other people. By the way, that’s fantastic for those people. I don’t think anything less of that at all, but I had to do something to make myself stand out.

Being homeschooled, I’ve never been the same as most people. I like different things you don’t see other people doing! I wasn’t into football or team sports. I always excelled at things that relied on me. Growing up I did things like trials unicycling and sword juggling. So I didn’t submit a résumé. I just emailed the company and said, “I’m a welder that can unicycle and juggle swords!” That’s all I put…which is a terrible thing to do because it’s highly unprofessional. I didn’t think I had a shot, so I figured why not stand out?

That’s certainly going to make you stand out!

It must have as they called me back. It was a weird way to get in the door. They wanted to meet a guy that could unicycle, juggle swords, and maybe weld. I met with the VP of Production and took a tour. I got to look at what they do; it’s just insanely overwhelming in terms of fabrication. I was blown away. I thought I can’t do this. Tulsa taught me how to weld. They didn’t teach me how to build a robot!

But they called me back again. I guess they were trying to gauge to see if I was the kind of person who always wanted to do better, learn more, and push myself forward. Once we got done chatting, they had me take a weld test.

Bear in mind this is still two weeks before I graduated. So after taking the test I go back to school, thinking about it all, and I carry on finishing up. A few days later they called to offer me a job. But they wanted me to start the next day. I may have given them the impression that I’d already finished at Tulsa!

I told them I could start Monday. Then I went back to Tulsa and switched my school shift to the evenings for the last couple of weeks. It was about six months later that I told them I hadn’t officially graduated when I started!

What kind of stuff are you welding?

How cool is that! How does the build process work?

Our designers will take an idea for a ride – whether that idea comes from us or a theme park – and start the design process. For example, right now we’re doing “Battle for Metropolis.”  It’s a Justice League ride with Superman, Lex Luthor, Batman, those kinds of characters. The designers will design the building, the ride, the ride cars, the different scenes, the animation, the animatronic characters – everything.

We’ll get the rough diagram of a character, like a cyborg, and the paperwork will say they need him to have a waist turn, an arm movement, a head tilt – everything they want the character to do. Then my department will build the metal structure, install the actuators, basically, make the metal frame move as required. Then, the other departments apply plastic over that frame, then clothes, skin, feathers – whatever it needs. We’re the number one dark ride company in the world!

Do you get to install as well?

Once all the elements of the ride are built at our shop in Jacksonville, we have them shipped to where the ride is going to be placed – places like Sweden, Malaysia, Singapore, China, Hong Kong, and all across the U.S. Then a team goes out to install everything on site and gets the ride up and running. That can take two to six weeks.

Are you happy with the money you’re making?

Oh yes. There are welding jobs where I could make more money, but I would be traveling more than I am and it’s not something that interests me. I’d rather make a little less money and have a job I love than make more money and not truly enjoy what I’m doing. To go from trying to live comfortably working multiple jobs, to living comfortably with one job you enjoy, it makes a world of difference.

Sounds like you have your dream job! Where would you like your career to be in three years?

I’d like to still be here doing what I’m doing. But, if something was to happen at Sally, the only other thing I’d like to do is apply to become an instructor at Tulsa Welding School once I hit the minimum five years’ experience I need to teach there.

Do you do any welding at home outside of work?

After getting the job at Sally, I was able to apprentice as a machinist and do a lot more things with metal other than just welding. Now that I’m making real money, I can afford to buy tools. I’ve started doing my own fabrication work outside of my real job. It’s been a lot of fun because I get to build whatever I want. I get paid to do a lot of car and truck fabrication for other people, but I also get to build fun stuff like little hot-rod go-carts. I build all kinds of stuff like one off custom drift trikes. They’re kind of like the trikes you see little kids on, but they have a motor and go about 70 mph! It’s fun taking nothing and making it into something.

Like I said earlier, you only get out of it what you put in. It applies in school and whatever field you go into, and that’s all you really need to know to succeed there. That’s it.

We get out on the boat. We live in Florida, so anytime the weekend comes, and it’s good weather, that’s what we’re doing.

Fishing, or just hanging out?

I’d buy a nicer welder that’s for sure. I’ve slowly been trying to grow my fab shop. I’m trying to start so I’d pretty much go ahead and get that up and running. I’d probably still work at Sally because I really don’t know what else I’d do. I wouldn’t by a Lamborghini or something. That’s just stupid! I wouldn’t even buy a new truck!