Mark, 26, from Houston, Texas, and a Marine Corps veteran, graduated from the Welding Specialist with Pipefitting program at Tulsa Welding School & Technology Center in Houston in April 2018.

Thanks for sharing your story, Mark. Tell us what you did after high school.

I joined the Marine Corps. I did a four-year enlistment, including a deployment. I reached the rank of Sergeant and then came home. I didn’t really know what I to do next. I thought I’d be in the Marine Corps for a long time, but things changed. It just wasn’t where I wanted my life to go. I got out in May 2017.

What made you think about welding school?

I made a list of jobs that I wouldn’t mind doing, things I found interesting. Welding was in the top four.

Where did the interest come from? Had you done some welding in high school?

Yeah. I played around with it in shop class high school. We got to learn a little bit, burned a couple of rods here and there. It wasn’t too much, but I knew I liked it enough to at least take a class for it.

Just out of interest, what other careers were on your list?

Firefighter was number one at first, but my body was a little too torn up. I just figured if my body’s hurting now, how am I going to make it being a firefighter? I also thought about being a game warden, but I needed college for that and I didn’t have any college credit. The other idea was police officer. But I figured if I was going to be a cop, I might as well have just stayed in the Marine Corps.

So you chose welding. Did you do some research?

I’d just come back from overseas. I had five or six months left in. I’d got a package to reenlist for another four years, but I’d just got divorced. That’s when I realized the Marine Corps was not what I wanted long term. I wanted to be a family man. It’s hard to do that when you’re overseas, constantly away. So I turned down my reenlistment package, along with a pretty big bonus. That’s when I did my research and made my list. I looked up welding schools online, the top three schools in the Houston area. Tulsa was down the street from my parents’ house. So I called, and they sent me information. 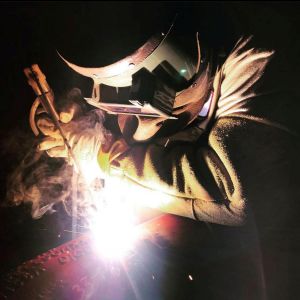 Did you enroll in the Welding Specialist & Pipefitting program from the start?

When I got home, I took a tour and they gave me more detail about the programs. Initially I wanted to be a welding inspector, but I didn’t really know what that meant! I just knew they got paid more. I told the advisor, “I want to be a welding inspector.” She told me, “Well, one, they don’t offer that at school, and two, you need to have a specialist welding background with at least five years experience.” I didn’t know anything about pipefitting when I went for the tour, but I figured it was going to be covered on my GI Bill anyway, and what was another two to three months to get an extra skill? I started class in August 2017.

I made a really good friend and we excelled together. We competed with each other, but it was friendly. It kept us on our toes. “Oh, man. My buddy did well today. I’ve got to do better than him tomorrow.” But it wasn’t too competitive. We could ask each other to help. It was healthy competition.

I also became good friends with an instructor. We’re from the same neighborhood in Houston. We both have the same Mexican American heritage, so right away we got along very well. We would weld and afterwards we’d go work out. He’d say, “I saw this on your weld. It looks like you need to do this.” He’d give me pointers. Even when he wasn’t my instructor for a class, he still came around to my booth and say, “Let me see your work,” or “How come you weren’t in your booth much yesterday?” or “What were you doing?” He was making sure I stuck with it. As long as you do good work and show that you’re trying, the instructors there are going to help you out.

I got a job as a combo welder while in the pipefitting class. I went to work for Henderson Rigs. It was a shop job, but they sent me out to west Texas a few times. I was there for about a year and a half.

What was it like getting your first welding paycheck?

When I got my first paycheck, I’d worked seven twelves, and I was still in school. It was rough going to school and then going to work, then sleeping for about five hours. But man, it felt good when I got my first paycheck. I came to school with new boots, new shirts, and everybody’s like, “Man!” I guess my demeanor changed. People actually thought I’d been welding for years already.

That paycheck was nice. But I started working for a contractor, Tiger Field Services, in September. My first paycheck when I hit the plants, getting a per diem too, was completely different, another level. It was double. I didn’t know people got paychecks that big. But the plant that we’re at right now, I don’t know if it’s a new budget because of the new year, but they keep sending us home early this month. Once you figure out what you’re worth and what you could earn, being shorted on your hours isn’t good.

Is that why you’ve been in touch with TWS Career Services? To see what else is out there?

Yeah. I’m pretty confident I could pass pretty much any test they got out there for combo welders.

Would you like to go work on the pipeline?

That’s my dilemma. I’m back to square one with what I want to do with my life. I left the Marine Corps because I wanted to be a family man. But now I’m not home as much as I should be. I do have a family now, a wife and two young kids, and I just bought a house. I took this job knowing I’d be away because I was building the house, and I was paying for everything—contractors & materials—out of pocket. It was a sacrifice I had to make to cover the cost of the house. But now that my house is finished, I can take a pay cut, come back home, work local, and have a regular 40-50-hour week and see everybody.

Where do you see your career going from here?

There are a couple of things I would like to do in time. Instructing would be one. I was a martial arts instructor in the Marine Corps and I just loved teaching. I love showing the younger guys what to do. There was a lot more to just teaching that one thing. You could get your lesson across, and then still get two or three more life lessons in while you’re teaching. I always thought that was really cool. I do still do want to be an inspector too, but I’m still a few years away from being able to do that.

What I personally like most is being able to show my craftsmanship and my pride in my work. There’s a saying I learned: “You’re only as good as your last weld.” You can have a bad weld, but it’s fine as long as your next one comes out better.

What advice would you give to students for them to be successful at TWS?