Johnny Pipes hopes to make a name for himself as a welder. Who wouldn’t want to be a welder with a name like that?! Johnny, aged 24 from Columbia, Missouri, graduated from the Professional Welder program at Tulsa Welding School in April 2015.

Thanks for your time Johnny; why did you decide on welding?

I’ve got a couple of buddies who weld; they were always talking about how much fun it was, how it didn’t feel like they were going to work every day. Also my dad’s got a welding machine in his shop up here on the family farm that he uses if something breaks and needs repairing; one day a couple of years ago a buddy asked me to weld a couple of things on to his trailer. I told him I’d never welded before but “sure, let’s give it a shot!” I did that for him and ever since then I kind of fell in love with it! 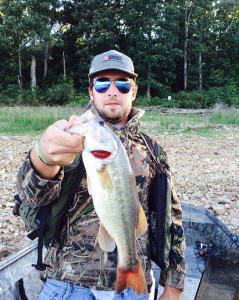 What did you do before going to TWS?

After high school I attended a local community college for three years and got my associate’s degree, just general education really. I was going to major in Fisheries & Wildlife, but after three years of community college it didn’t really interest me any more to be honest, so I changed my mind. Then I just worked for a couple of years, which is when all that welding stuff started popping into my head.

What kind of work did you do?

I did landscaping and I worked at a floor covering store; I worked at a tractor store for a while too. But nothing really took my interest too much, nothing I could see myself doing for the next 30 or 40 years.

When it came to choosing a welding school, why did you choose TWS?

My first choice was actually a welding school here in Missouri. I called but they had an 18 month waiting list. I didn’t want to wait that long, and I’d heard good things and bad things about the place. But to be honest that was kind of the same way with Tulsa, you know you can’t please everybody…

But one of my buddies had gone to TWS, so I talked to him about it. He said it was a pretty good course; it’s about three months longer than the other program, but you do learn more about different welding processes at TWS. The other thought I had was that I could get in and out of the seven month TWS program and still be more than a year ahead, rather than wait 18 months, then do a four month program.

It was the amount of hands-on experience and the instructors. The only way you can learn and make yourself a better welder is to practice, practice, practice. Combining a good instructor and more hands-on time felt like it was more productive you know? I could feel myself making progress. The main thing they taught me was to keep my hood down and weld as much as you can. That’s the only way you’re going to get better; learn from the mistakes you make. Just run as many plates, pipes, tubes as you can… 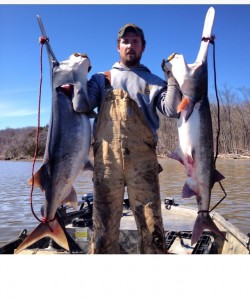 It was about three months. I actually went back down to Tulsa because National Boiler came to the school; they had a pre-test you had to pass in order to go on to their training program. I think there were like 100 kids there. I passed that test and went on to the two week training. They made cuts through the two weeks, where they dropped kids they didn’t think would make it. Then they had the final test; it was a simulated tube test which was kind of hard, but I passed and they hired me on the spot. After that it was about three weeks before I went out and worked, and my first job was down in Texas.

Working for National Boiler is a 100% travel job; does that appeal to you?

Yeah it sure does, I love it. I’m single, no kids, so this is perfect. The first job in Texas was 14 days, then I was home for a week before going back down to the same place, Texarkana, for another week. I’ve been home now a little over a week. Right now it’s getting slow for them; they say it picks back up at the start of the year. I’ve looked at other staffing agencies to keep me busy until they come calling again.

It’s great money when you’re working, but you have to take into account the time you’re not working. If they keep you busy eight months of the year, that’s not so bad. I’ve really only just started, only been on two jobs so I haven’t really got the chance yet to get busy yet. But that will change come January.

What did you do with that first serious paycheck?

It was the biggest paycheck I’ve ever got, but I just took care of the mundane stuff. I paid some bills and whatnot! I did buy a new gun I guess. A new truck is my next thing next year…

Where do you want to be in three years?

I wouldn’t mind still being with National Boiler; if I had to pick something else I’d choose pipeline work. 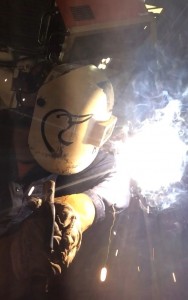 With a name like Johnny Pipes, what else could you do!

Is that your dream welding job?

Honestly I’d really like to go work overseas and see what that’s like. I think that would be pretty cool.

Did you come out of TWS feeling like you’re on your way to becoming a welding specialist?

Yeah, I really did. Before I went there, I’d never really welded. Yeah I’d done a little MIG in the farm shop, but it was really all new to me. Once I got down to TWS I was kind of overwhelmed; I didn’t know if I was going to be able to do it. But pretty soon, within a couple of days, I realized it wasn’t going to be bad and I was going to pick it up pretty quick. I learned the different welding processes fairly quickly.

When I go to work it doesn’t really feel like work, you know? I feel like I’m not even working, I’m doing something I enjoy. The money is good too, and you pretty much have the skills to build whatever you want. It’s all pretty cool!

If they’re debating whether to go or not, I’d tell them to go ahead, do it. It’s going to be overwhelming at the start; you’ll have doubts of whether you can do it. But if you enjoy the welding – and it’s not for everyone I have to say – you’ll realize pretty quick that you’re going to be fine, there’s nothing really to worry about, there’s certainly nothing to be afraid of.

How hard you work at school, and once you leave, is going to decide how far you’ll take your welding career. If you want to get to the top, you’ve got to put in the years until the opportunities come along. It doesn’t matter how long you’ve been welding, you’re never really an expert because there’s always some new tips and tricks to learn.

I’d also tell them to keep your hood down and weld as much as you can. I wasn’t the best welder when I started, but I just practiced and practiced and I got better every single time. I never really took a step back. I can still see myself making progress every day.

I like to duck hunt. I also like to fish, and sometimes I like to take my boat out on the river and just float. I love the river; the Missouri is just a couple of miles from my house so I get down there all the time. 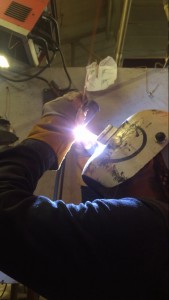