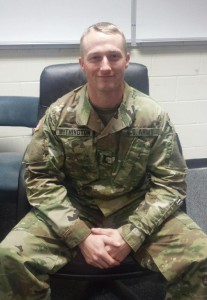 Trey, aged 31, from Cypress, Texas, graduated from the Welding Specialist with Pipefitting program at Tulsa Welding School & Technology Center in Houston in June 2016. Trey commutes about two hours each way to his job in Hearne, Texas.

Thanks for speaking with us, Trey. What were you doing prior to going to welding school in 2015?

I was a pizza delivery guy for about 10 years; it was a nice, flexible job. I did it all through college and through welding school. I’ve been in the Army National Guard since 2009 when I joined my college ROTC program. I graduated Sam Houston State University with a BS in Criminal Justice and a minor in Military Science and my officer commission in the National Guard as a Second Lieutenant in May 2012. I’ve since been promoted to First Lieutenant. I officially serve one weekend a month and two weeks in the summer. We’re on a regular deployment schedule, just like active duty.

I’m the Executive Officer (XO) at an Army Construction Company. They say it’s one weekend a month and a couple of weeks in the summer, but it’s actually a full-time job. They don’t tell you that when you sign your contract! We have about 140 soldiers on the books at our Company so there is a lot of administrative duties and planning.

What made you choose welding in 2015?

I’d always wanted to be a welder. I’ve always worked on cars, always been around mechanical things; my dad is even building an airplane. I’d begged my dad to teach me how to weld for as long as I can remember, but it just never happened. Tulsa Welding School were opening up a campus down in Houston, and my brother went there three or four months ahead of me. He actually graduated top of his class. I wanted to see how he got on, what the program was like. I waited to see what his experience was before I decided to pull the trigger on it.

The interaction with the instructors. Everybody that goes through that program has a favorite instructor I’m sure, a person that they kind of latch on to and feel comfortable with. For me it was Don. I’m pretty coordinated, and I got really good at TIG welding. It came naturally to me. But Don really helped me through the intricacies of that process. Even though I’m not TIG welding at the job I’m at now, I wish I was. I really latched on to Don and he helped me a lot, to make me even better at I than I already was.

I also just really enjoyed learning something new, putting two pieces of metal together in a scientific way, I guess you could say.

So, tell about this job you commute two hours each way to.

I work for a company called GATX, a railcar leasing company. I’ve been there since October 2016. It’s my first job out of welding school. We repair tank cars and hopper cars. All those big cylindrical tank cars you see on the railroad, we repair them from top to bottom, front to rear…everything. The facility I work at in Hearne, TX, is the biggest facility the company has nationwide. We’re capable of building tank cars from ground up, but mostly we just do repairs.

How’s your daily schedule with that commute?

I leave the house at 5am. I work 7am-3pm, get home around 5pm, then maybe go to the gym for an hour and a half or two hours, then I’ll do some National Guard paperwork. I don’t have time for too much else.

What kind of stuff are you welding at GATX?

Currently, I am working on Track 32 which is heavy repair. We do a lot of metal buildup and structural welding. We actually work on the tank that sits on the truck of the car. There’s a thin protective jacket around the tank. Imagine an insulated window that has an outdoor pane and an indoor pane – it’s the same thing on a tank car. There’s insulation in between the actual heavy tank that holds the commodity and the outside tank jacket that protects the tank. There’s all kinds of regulatory rules around the tank part, which is the thick metal. They get really nervous when it comes to repairing that stuff so they only put people on it that they trust.

Where would you like your career to be in three years?

I want to be TIG welding. I want to be welding high alloy tubing, like Inconel or Hastelloy. TIG welding is more precise; it’s cleaner. What I’m doing right now with the railcar repair is dirty; we pretty much exclusively use flux-core and stick welding. We don’t do any TIG welding, and that’s what I was particularly good at and enjoyed at school. Not that I don’t enjoy the welding I’m doing now, but I’d prefer to be TIG welding.

What would your dream job be?

I think doing Hastelloy, high chromium steel, or Inconel. Welding those in a nuclear reactor or something very technical would be cool. Hanging off an oil rig sounds like it could be fun, because I’m kind of an outdoors guy – I like skydiving and stuff – but if I could be in an air-conditioned building welding TIG, that would be ideal!

I don’t have too much time these days, but I do have a motorcycle and a scooter. The motorcycle is being worked on, but I don’t have time to work on it, so it’s in pieces right now! I recently went to the Shoshone National Forest in Wyoming for 12 days with my brother and a buddy of ours. We hiked; we fished. I enjoy being outdoors.

Go to class! The only reason I ever missed class was because I had military drills. You’ve got to have a work ethic. I think I got mine from my parents, and from the military obviously, but I’ve always had a really good work ethic. I always finish the job. I believe that if something is worth doing, it’s worth doing right. If you don’t live that, then you’re just going to be mediocre at whatever you do.

I’m a really simple guy. I don’t know! I’d take half of it and invest it. Then I’d probably…I don’t know. I hate money questions! I’d probably buy an older sports car, that would be cool, and maybe I’d give some money to charity!