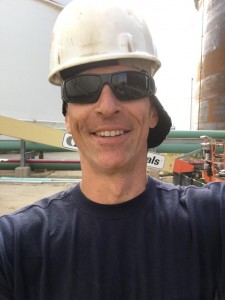 Will, 48, is from Okmulgee, Oklahoma. He’d never picked up a welding torch before enrolling in the seven month Professional Welder program at Tulsa Welding School. Will graduated in June 2014.

Thanks for your time, Will; tell us how you came to welding in your mid 40s?

Well, let’s just call it a career change. My whole life, until that point, I was a drug addict and a criminal, and I’d been in prison for 16 years. When I got close to getting out, I had absolutely no idea what I was going to do, no idea…but I kept seeing these Tulsa Welding School commercials on TV. I’ve got a couple of homeboys who are welders so I started reading up about welding. I got out of prison in September 2013, and I was in welding school in October.

That’s quite the ‘career’ change…

I know; it’s opened every freakin’ door for me. I mean I made $80,000 my first year out of prison…legally! I know it sounds corny, but I don’t know any other way to say it. Learning how to weld completely changed my life. It just changed everything about it.

When you were reading up on welding, what was it that appealed to you?

As I learned more about it, there were three things. First, the whole welding process just fascinated me. Secondly, was the money. Third, welding is one of the few occupations where you can step out your door with not a dime in your pocket, and your trade can take you all around the world.

How tough was it to immediately adjust to a school situation after 16 years in prison?

It was really hard. With hindsight I did it way too early. I wasn’t ready. I made the most of it. I learned all I could, but I totally underestimated the whole reintegration thing. I mean it’s a real deal. It was tough. Not hard like prison was, but I had trouble talking to people, saying the wrong things at the wrong time. I fought against becoming institutionalized because I saw guys go that way, but still I guess some of it crept in. Nearly four years on and my head’s still not right.

The fact that I got to weld every day, and that I had a wealth of experience to draw from the instructors. There was not a question I could ask that they couldn’t answer. I loved that because I had lots of questions! I did my five hours in the morning, and then I’d go back in the evening. If there was a booth open, I’d do five more hours. That’s how I tried to get all I could from the experience and it’s paid off. I just liked the whole deal. I’ll be honest; the only thing I didn’t like about it was that it went by so fast!

Why do you say that?

But did you leave Tulsa feeling you were on your way to becoming a specialist in your field?

For me, yes, without a doubt. It’s all up to you though. If you just go and do your five hours, I don’t know what to tell you. But if you go in the morning, and then come back in the evening and put in more time…I tried to be there every time the doors were open because I knew for a fact that I was working on something that was going to sustain me for the rest of my life. I knew they were laying the foundation; that I could then get out into the workforce and build upon that, and there’d be no limits.

After graduation, was it tough getting a welding job with a criminal record?

There are some companies that absolutely will not hire you if you have a criminal record, but I started working as a shop welder at Matrix the very next day.

I researched companies and decided that was the one I wanted to work for. I went and talked to the guy and told him I just graduated welding school. I said my diploma might say I’m a “professional welder,” but I am not. He let me take a weld test, and the rest is history. I was there for about two and a half years.

In prison you may earn a few bucks a week. Your first year welding you earned $80,000 – how hard was that to deal with?

Success is almost as hard to deal with as failure. You just have to handle it right. It was a big deal to have that much money at my disposal all of sudden. It really put things into perspective. It’s where the rubber meets the road, you know, what am I going to do? Was I going to keep working or go back to my old ways? It’s about making good choices.

Did you do anything special with your first big welding paycheck?

I bought my wife, Heather, a Louis Vuitton. A lot of the guys reading this won’t know what that is, but I dropped about $3,000 on a big purse! We’ve been married about six years, so she deserves it. She just went to a Louis Vuitton show today as a matter of fact, so I better check the credit card bill.

So the financial benefits of welding have changed your life?

It gives you freedom to make choices, but you’ve got to make the right choices. I have to say that I’ve got a thing for trucks. I’m now on my fourth or fifth new truck since I got out of prison, and I just bought my wife a BMW! You know I was talking to a guy at work today. He is a trained, certified CNC Machinist. He quit that career to come out here and weld because we make so much more money.

A bunch of us got laid off from Matrix in December last year, so I started searching around. There’s a guy I know that used to be at Matrix who works at Willbros, and he told me to come on over because they’re rolling! So I started working for Willbros Downstream in January. 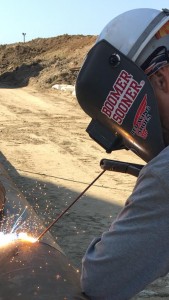 So what are you working on?

I specialize in construction of these big 300ft storage tanks that they keep oil, natural gas, chemicals and such in. We do the hook-ups from the pipeline itself, to the compression station, to the storage tanks. I’ve been a part of some really impressive multi-billion dollar projects in just the few years that I’ve been out here doing this. I just finished a job in Galveston then I got to go home to Oklahoma for a week, and now I’ve just started a job in Sealy, Texas. We’re building storage tanks for Enterprise Products. I’m living in a hotel next to the job site. I’ll be here until November probably, although my crew may get moved to a job in New Mexico at some point before that.

Where would you like your career to be in three years?

With all this opportunity, do you wish you’d discovered welding at 25 not 45?

Are you kidding me? Almost every freakin’ day! Just the strides I’ve made in this short time, imagine where I’d be had I started doing this right out of high school? I could have retired at 40. Bottom line.

If you could have any job, what would your dream job be?

My dream job would be a rig welding job where I could work my truck and be home every weekend.

What is it you enjoy most about welding?

The sense of accomplishment, the money and the brotherhood. We’re doing some really difficult stuff out here, and when you finish a project, step back, and look and say, “Wow – I just did a $26m project with all these sophisticated welds, all these sophisticated welding processes; I was in there doing that.” It’s crazy, it’s really awesome. I can’t explain it. When you’re part of something bigger than yourself, it’s cool.

Do it now. Don’t wait. There’s so much opportunity out there right now; there’s so much work. Now is the window of opportunity. This is the time. But once you graduate don’t show up at a job site telling them you’re professional welder because you just got out of welding school. They will laugh your ass off the site. Tell you to leave.

So did you make any connections at Tulsa for job hunting?

I don’t have too many connections from school. I’d just got out of prison so I wasn’t too sociable for chitchat and whatnot. But networking and connections are key. My mentor at Tulsa was an instructor; he told me, “Will, everything is about networking and connections. Every job site you hit, you make friends; get numbers, get names. It’ll come in handy.”  Sure enough, my phone is filled with names and numbers that I can call about jobs with companies all the way down to the Virgin Islands.

I just keep it simple. I just hang out with my wife and my family. We’ve got two dogs that we play with. We just try to enjoy life, and the security we’ve now got.

I’d buy my welding machine, pay off some debt, tithe 10%, I don’t know? Probably give a bunch to family and stuff! I want my welding machine. To me, that’s like having a printing press in your house that prints money!

So what’s stopping you? Maybe if you stopped buying new trucks?

Yeah, I’m not going to BS you. A welding machine is about $14,000 so I could have had one, but it was such a nice new truck. I had to have it! Honestly, I’m right around the corner from getting one. I’ll soon be printing money.