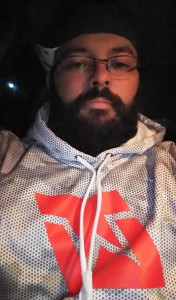 m the Professional Welder program at Tulsa Welding School on December 09 2016. Jeremy is married to Cecelia and has seven kids, aged 18 to 4.

Thanks for your time, Jeremy. Tell us about your prior career.

Prior to coming to Tulsa Welding school I was in law enforcement for about seven years. I figured I’d try a different career.

What made you want to get out of law enforcement?

There’s just not enough pay for what you’re expected to do. It’s getting bad out there, and I’m not going to risk my life for $15 an hour.

Had you welded before?

Before I went into law enforcement, I welded for probably three or four years. I only welded MIG and Flux though. I never did any stick or anything like that. I just thought I’d try to learn everything I could. That’s what I did. I graduated, and now I can weld pretty much anything I want.

So why did you decide to go to welding school?

Basically, because I knew I could make more money with more knowledge. Having more knowledge makes you more valuable. Knowing more than just MIG meant I can work pretty much anywhere I want. I wasn’t just set for one thing.

What did you enjoy most about the program?

The instructors did an amazing job. They kept me striving. Whenever I did a task, they were there to help me with everything. They never let me down. I was the Top Welder for all three classes – morning, afternoon, and night. I had the best GPA. I think it was 3.7, and I won five Top Ones during the program.

Wow, congratulations! Did you get what you wanted out of it?

All in all it was just a really good school to go to. The instructors made it fun. I traveled from Ponca City to Tulsa every day, five days a week. That’s almost a two hour drive one way; so I was spending up to four hours a day traveling. I did that for seven months.

So, four hours driving plus five hours in class every day – were you working as well?

You had the energy to do that with seven kids. How old are they?

Did you feel like you were on your way to becoming a specialist when you left Tulsa Welding School?

You have enough time in there to learn pretty much everything and get it down -if you go in there to learn that is. There were a lot of kids there, 18-21 year olds, that didn’t take it that seriously. One day they’re going to wish they did. They’ll wish they utilized their time at Tulsa better when they get out in the field.

If you go in there with your head on straight, go there to learn, and make the most of your time with the instructors, once you get out of there you should pretty much feel like you can accomplish anything.

So, you graduated just two weeks ago. Are you working yet?

Yes, I work for PCL. I’ve got a welding job out in the field. I’m actually welding an emissions tank at an Oklahoma Gas & Electric power plant in Stillwater, OK. It’s a two year job. Once this project is done I can travel wherever PCL wants me to go next. As long as I keep the bank account topped up, I don’t think I’ll have a problem with my wife!

How did you get the job so quickly?

I was still at Tulsa. It was the week prior to graduation – maybe December 6th, something like that. Chris from the school got a hold of me, told me a little bit about a job coming up, and asked me if I’d be interested. Sure I was interested, so PCL gave me a call. I passed their weld test when they came to the school, and they hired me on the spot.

Are you happy with the welding paycheck? Better than your law enforcement check?

In three years I’d like to be welding on some pipe somewhere. Then probably continue my career with some more training and become a Welding Inspector one day.

Would you go back to Tulsa Welding School for that training?

Yeah, I wouldn’t mind going back there one bit! Now that I’ve completed the Professional Welder program, to complete their Welding Technology degree program is another eight months or so. You can make a lot of money as an inspector.

What would your dream welding job be?

My dream job would probably be welding internationally with my own rig. Maybe something in Africa? I’d also like my kids to work with me somewhere on a rig one day. My 14 year old daughter is already talking about taking up welding. I’d love that, although she’d probably end up better than me! But that wouldn’t hurt my feelings none! I want her to be good at something. She’s pretty thick skinned too. She’s one of those tomboys you know – she can run with the best of them, so she’d be fine with the welding guys!

What’s your favorite part of being a welder?

Did you make some connections at school? Guys you’ll keep in touch with, share opportunities with?

I made a pretty good set of friends there. I’ve already helped three of them out with this job I’m on now. I’ve let them know of the opportunity and had them call in directly. People have done the same for me, but I’m not ready to leave this job yet – I’ve only just started!

Don’t just say you want to become a welder and try to do something you can’t. If you do that, you’re just setting yourself up for failure. People like that never succeed in life. You’ve got to set your mind to it. Have a passion for it. Welding is not for everyone. I learned that in the seven months I was at school. You’ve got to have the mindset, the will power. You’ve got to have that before you even think about trying to weld. Some people just want to be babied – if that’s you, don’t choose welding as a career.

What do you to relax, Jeremy?

I ride motorcycles. When I’m stressed out, there isn’t anything better than getting on two wheels and feeling the wind. That’s relaxing enough.