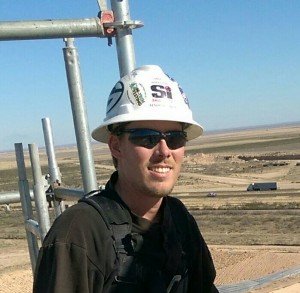 Kendrick, aged 30, was born in New Mexico. He is married to Jennifer with an eight-year old son and a seven-year old daughter. In January 2012 Kendrick graduated from the Associate of Occupational Studies in Welding Technology program at Tulsa Welding School.

Thanks for speaking with us Kendrick; talk to us about your career before you enrolled at TWS?

My entire family, generation after generation, served in the military. I felt it was my obligation to carry the torch and follow my father’s footsteps. So as soon as I got out of high school, I enlisted. I served active duty for three years and completed my term. Following that I landed a position at a correctional facility in Oklahoma for about two and a half years, but the facility was bought out and shut down. 350 of us lost our jobs. I just couldn’t find another position that matched my experience.

Is that when you decided to go back to school?

I called my dad and told him I didn’t know what to do, that I needed a career change, something a little more stable. He suggested welding. I’d never touched a welding torch, but I decided to look into it; it sounded interesting. I did some research and two weeks later I called Tulsa Welding School. I started the Professional Welder program in November 2010.

Looking back now, what was your favorite part of the school and why?

There are actually a couple of things that I absolutely loved. First, is the staffing. The instructors, the counselors – if I needed anything, they had an answer for me. The second thing was the motivation that students gave each other. I wouldn’t say we competed, but we wanted to make ourselves as good as possible, and that’s what we pursued.

Did you enroll just to do the welding program, or were you thinking about the Associate degree?

I just went for welding. About halfway through I started talking to Margo [Assistant Director of Admissions] and she mentioned the Associate degree and the quality control aspect. To be honest, I found that more interesting. About a month before I finished my welding program, I started the process of enrolling in the Associate degree program and just kind of rolled on from there. I figured if I’m half way there, why not finish?

What was it about Quality Control (QC) that interested you?

I love working with my hands, but when it comes to QC, it’s the detailed process that I found more interesting: how everything works, breaking it down to the material type, to how everything bonds. It’s really more of a chemistry thing I guess. That’s where I found great interest.

When it comes to the inspection process, it’s great to have the labor experience behind you. However, the knowledge to know what you’re looking at is crucial in this field. You have to know the procedures, the federal guidelines, what these processes look like. You have to understand the path that we have to follow, and welding labor experience doesn’t really help with that. But you couldn’t hire some random person with no experience of welding at all. However, going through the program at TWS gave me the understanding of what needed to get done, and how it needed to get done. When I left school I had a base knowledge to work from. That’s what set off my career.

So was your first job an inspector position?

Four days after I graduated and received my degree, I got a phone call about an inspector position. I arrived at the interview and was expected to start that day. I’ve been inspecting ever since. That first job was with IPC. I was with them for about 18 months before landing a position as a field inspector with JVIC. I was with JVIC for about six months before I got a call from Saulsbury Industries. They were interested in what I could offer to the company. I’ve been with them now for about three years.

How did you get that first job four days after graduation?

IPC contacted the school. They wanted to find a recent graduate, and the school contacted me. That’s when I approached the company and got hired on. It was the school’s reputation that got me the opportunity. If it wasn’t for the school, that never would have happened.

I understand you had a tough time personally while at school. Would you share that story?

When my start date rolled around in November 2010, Jennifer (then my fiancé) dropped me off and drove back home. We lived about two or three hours away at the time. I had $17 in my pocket. That’s all we had so there was no going back. It had to be done. If I didn’t finish, well, we couldn’t pay the bills.

No place to live? How did you make that work?

Margo, my student counselor, suggested I roommate with another student. She put me in contact with a guy, and we became real good friends. He is also prior military, and part of the Navajo tribe. His tribe paid for an apartment during his entire time at the school, so that was a huge help for us both. Neither of us were working. We were just trying to afford the gas to get to school. Jennifer and I had just had a new baby, so she wasn’t working. She was home with the kids. It was a very tough road to start on.

That’s tough to be away from a very young family.

It was. But about four months later, I finally started receiving my GI Bill, so I established a little funding to move the family up to Tulsa. We finally got ourselves a little apartment. Again, none of us had jobs so while I was going to school, she’d be home taking care of the kids. It became such a stressful time financially that when I was about halfway through the degree program, she took our infant daughter and left me. I kept telling her, “wait until I finish. I’m going to land a position and we won’t have to worry about finances.” But it got too much for her.

I was left alone as a single parent with my young son [from a previous marriage], and the struggles got worse as I now had other financial obligations to meet. The pursuit of happiness had started to fall apart on me, but it’s just one of those things – you don’t give up.

Once that situation happened, I just tried my best to take care of my son alone, eating ramen noodles, and going to school. A few months later, once I’d graduated and a couple of weeks after I started working, Jennifer moved back in and our family was reunited.

Thanks for sharing that personal story.

It was tough for everybody. But having gone through that hardship together, we’ve built a relationship over the past five years that’s just unstoppable now.

After all that hardship, what did you do with your first paycheck?

It was a very good paycheck. That check that gave me the confidence to keep moving forward with what I enjoyed doing, and I got paid very well for it. First, I caught up on bills, then I took my son out to dinner and the movies. We did something to celebrate the occasion as my fiancée wasn’t with me at the time.

Let’s start with the comparison here! Before I started school, as a correction’s officer, I averaged about $22,000 a year. Last year I was earning a lot of money – in the high six figures. So, in just the past three or four years, I’ve gone from a new inspector to an experienced inspector. I’m now in line for the West Coast Division Quality Manager position next year. That job will put me in charge of the entire west coast of the United States for our company with about 50-75 inspectors working for me. So, where will I be in the next three years? The sky is the limit.

So, it sounds like you’ve landed your dream job?

I did land my dream job, yes. I’ve come to know hundreds of people with this company. It’s just one massive family for me.

What do you enjoy most about being a Quality Control Inspector?

It’s the presentation of the work after I’m done with the project. The school prepped me for a piping inspection position; that’s what I went to school for. With the guidance of the school, getting me the understanding and experience of how this process works, since school I’ve expanded my knowledge to not just piping inspection, but also concrete inspection, coating inspection, and structural inspection. There are 15 or 16 different codes that I have to follow now, so it’s the expansion of knowledge that drives me forward. That’s what I like about my job – always learning more.

What do you do for fun Kendrick?

Fishing, snowboarding, skydiving, and bowling. Those are the first things that come to mind.

I would travel with my family. My wife has always had a dream of going to Japan, so I’d take the family on a long cruise to Japan. I’ve always thought it would be a fascinating place to visit.