Matt, 29, from Bakersfield, California, is a Senior Welding Instructor at Tulsa Welding School. A TWS graduate himself, Matt has been teaching at the school since February 2020.

Thanks for your time, Matt. When did you start welding?

I broke out as a welder in 2011 after I graduated Tulsa Welding School.

I really wanted to be a fighter pilot. I love aeronautics. When I got contracted to work for the Air Force at Edwards doing R&D rocket testing, I was tickled to death seeing the jets fly by. I love it!

Talk us through the headlines of your welding career.

I worked in pipeline construction and maintenance, fabrication, although I never worked in a fab shop, I was always out in the field. I’ve worked in the sanitary stainless industry, which is food grade tube welding from dairies in Wisconsin, to Yoplait in Las Vegas. I worked in the aerospace industry at Edwards Air Force Base. I did shipbuilding and ship repair, and oil field work in Alaska. I’ve done a lot of cool stuff. 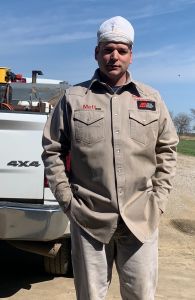 You’ve done a lot in a short window. Why did you go into teaching?

What really got me interested in teaching was working with welder helpers out in the field. I was one. I helped for a year. These guys/girls are 18 years old. They just want to show up and work. They practiced with us. They would weld off our trucks at lunch. They’d spend every waking second welding after work every day until it was dark, even when they were super tired. They didn’t feel like it, but they wanted to be welders. Then, later, to see them get their own truck put together, go take a test, and now be welding with us. That was rewarding for me. That’s what brought me into teaching.

The traveling. I wanted to slow down and put everything on cruise control. Oil and gas is really up and down. It can be very, very good, you can stay busy, but you’re at the mercy of environmental, even political, situations that can slow the market down. I got tired of chasing the work. I wanted something where I wasn’t going to have to worry about my job. I could be home every night. I got tired of traveling around.

Have you got a family, Matt. Married? Kids?

I’ve been married a year and half, but we’ve been together 10 years. Traveling was a strain on her. I wanted to buy a house, have some property; that’s one of the biggest reasons that brought me back to Oklahoma. I went to TWS in 2010 and I really enjoyed the area. I don’t live in Tulsa. I live about an hour north. We’ve got eight acres, and we’re having a great time! It’s been a good decision, but it was a decision that I was apprehensive to make. I’ve never put all my eggs in one company. I always had to jump and go to a job at a moment’s notice. That’s another reason why I wanted to slow things down and have a little more job security. It’s very stressful on the road. You never know what’s going to happen.

Did you enjoy the money you made traveling?

I really enjoy seeing the progression in the students. In the time I’ve been here, I’ve taught every single phase of the Professional Welder program. Most students don’t know anything about welding in Phase One, but they’re excited. If I have them in the first phase, and then I see them again two or three phases later, seeing their progression is really cool. When I see a student that didn’t have any idea what they were doing now welding pipe, that’s awesome. Our phases last five weeks, so two or three phases is really not long.

I’ve got a couple projects on my plate now, but weather permitting, I’d probably be on the lake fishing.

What was your favorite tool when you were out in the field?

My welding hood. People ask me a lot about it because it’s in pretty rough shape, but it’s a pancake welding hood that I’ve had since 2010. I’ve had to do to do some upgrades to it. It’s kind of a hard to describe. It sits against your face like a pair of goggles. It’s got two flat pieces that go in front of your face and on the left side of your ear, depending on what hand you weld with. But it has been run over, thrown out of frustration, and hit with weapons. It’s been in extreme cold, extreme heat, and been all over with me.

I’m torn between two people. The first would be my father’s mother because she passed before I was born. I would have really liked to have met her. My older brother got to meet her, but I didn’t. The second is more on the funny side. I’d like to have dinner with Dwight Yoakam, to see if he could teach me his dance moves! I’ve always idolized that guy!

Pipeline construction. I loved it. It was it was very fast-paced, and we worked very hard. I felt really good at quitting time when we’re rolling the truck up. I felt good seeing my helper dog tired. I’m tired, but we got a lot done and I felt like I earned my pay that day.

I also enjoyed the people I worked with out there. You meet people from job to job that you may not have seen in six months. You’re talking, you’re swapping stories. Then after work, you’re sitting at the hotel or in your trailer or camper, watching a football game, grilling steaks, and it’s just fun. It’s not a job. You’re having fun all day. You’re telling jokes, you’re talking to your coworkers, or your helper. You’re just having fun. It didn’t feel like work. The whole environment in that scenario was fun.

Nick Bush. He was a welder that I’d worked with, and we became very good friends. He was a few years older than me, and he really took me in. He helped me out with learning stuff. When work got slow and he was still working, he’d get me a test with that company, and I’d go work. Then I’d do the same for him. We are our very close friends.

Another gentleman is Dan Taylor. He’s the most influential person I’ve ever met as far as advice and how to conduct myself at work, how important it is to be professional, to have humility, to not be “that guy”— arrogant, full of yourself, because money goes to people’s heads. He was a quality assurance manager and a welding engineer for a company I was working for. He tested me when I took my first welding test. I was so nervous and scared that I was nauseous. He laughed at me because he had seen it so many times before. Both those guys really helped me shape my career.

What’s the biggest piece of advice you have for students who are just starting out?

You get out what you put in here. It’s a fast-paced program. It’s a lot of information in a short amount of time. But if you don’t try, you don’t put in the effort, you’re not going to be happy with your results or your experience. But if you try, and you learn, and you listen to what the instructors tell you—no matter who it is, there’s a lot of knowledge in this school—you’ll do well. Ask a lot of questions, be engaged, and do your best. Do all that and you’re going to go places and do very well for yourself. Show up every day, do your best from start to finish, and any extra time you have, come practice.

That’s the key right, putting forth the effort and practicing in a booth?

Yeah, it takes patience, but repetition is key. I have conversations with students quite often, where I have to tell them, “I cannot do this for you. I can’t hand you a big bucket of talent. You have got to do this over and over and over.” But then they say, “Well, you’ve been doing this for 10 years. It’s easy for you.” I have to explain that I was in this school, I know what it’s like. I wasn’t gifted, but the reason I can do it the same way every single time, day after day after day now, is because it started here in school. Repetition, repetition, repetition. Do it over and over and over. And then out on the job, it’s the same thing. Welding is very repetitive. That’s why some welders, myself included, say it can get monotonous, boring, because it’s just around and around. But that’s what makes you good! It’s not that my equipment is different, it’s not that I have some magical weld machine that does it differently. I weld on the same machines you do. It’s just repetition. That’s all it is.