Luis, 47, from Houston, Texas, is an instructor for the Welding Specialist program at Tulsa Welding School & Technology Center in Houston. With 13 years of welding experience, Luis joined the TWS family in December 2017. He currently teaches afternoon and evening classes.

Thanks for sharing your story, Luis. As a kid, what did you want to be when you grew up?

I wanted to be a veterinarian or a police officer. But when I learned that you need eight years school to be a vet, I kind of changed my mind! I don’t know why I stopped wanting to be a cop. I still kind of do, but I’m too old now to go through the training.

Tell us more about your career.

I was a pipefitter first, then I switched from pipefitting to concrete work. I was a cement finisher and a foreman for a long time. When that industry got kind of slow, I started welding. I went to welding school in 2009. I was already welding by then, but I wanted to learn how to weld pipe. I’ve worked in fabrication shops, and I’ve done a lot of plant work like shutdowns and deconstruction. I’ve not done any pipeline work. Maybe when my son is older I might do some of that, but he’s only 12.

Is this your first teaching job?

This is my first full-time teaching role, but I have done some part-time teaching to help a friend who owns a welding school. Also, I was a supervisor for a welding contractor, and I taught several guys how to weld on the job before I came here.

So why did you decide to go into teaching full-time?

I kind of liked it when I was teaching guys at my last job, so when I get laid off, I wanted to try something different. Tulsa was hiring, and rather than just getting another welding job, I decided I wanted to show people how to weld and maybe help give people a future by teaching them the skills I have. 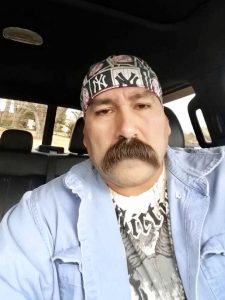 Has teaching been as you expected?

I didn’t know what to expect, really, but yeah, for the most part, it’s been awesome! My students have talked to other guys who aren’t in my class, and then they’ll come over and ask me to show them this and that, so it’s pretty awesome. Everybody teaches or explains things differently.

When they’re having problems with a certain process like stick or TIG and I can actually help them. It just takes a little bit of tweaking sometimes, and when they get it, they’re like, “Oh, man, it’s pretty easy!”

Most people think I’m really mean because I’ve got a big mustache, but once they get to know me and see how I like to joke around, they realize I’m not! Most people don’t know that I’m a big teddy bear, probably because I was given full custody of my son when he was a newborn. I’ve raised him alone for the past almost 13 years. He’s my only child, and I’ve got my hands full with him!

I’d take my dog to the park. She’s a 5-month-old pit bull. She’s really spoiled! She’s a big couch potato like me. She’ll sit right next to me watching TV and let me pet her all day.

Probably my welding hood with all my funny stickers on it! I don’t use it anymore, I have another one, but I use it to show my students how beat up and full of burns and holes it is.

The alone time when it’s just me and my machine welding, looking at the puddle. That’s when you realize you’re not just welding, you’re creating stuff. I kind of love that.

If you weren’t a teacher, and money was no object, what would you be?

I’d probably be a pier fisherman. My son and I just spent the weekend fishing down in Corpus Christi. We’ll probably go back down there this weekend for the three-day Memorial Day weekend.

If you were to tell someone “Thank You” for helping you become you, who would it be, and why?

Probably my mother. I struggled a few times in my career, and she was always there to give me some words of wisdom and tell me not to worry. Every time I failed, she was there to pick me up. My dad wasn’t there, but my mom always was. You can tell that we were really, really close.

Even though welding looks hard, it’s really not as long as you pay attention and put the work in. It’s going to get easier with time. That’s what I tell my guys when they say I make it look easy. I say it’s because I’ve burned thousands of pipes. You’ve got to burn a lot of rods before you can make it look easy. So don’t get discouraged too soon, because welding does that to all of us. Trust me, I had a hard time transitioning from plate to pipe. I tell them that if I can do it, they can do it.

Putting the work in is important.

It is. I had a guy that I had to re-phase. He was doing really bad—coming in late, leaving early. I told him he was spending a lot of money, but he wasn’t showing up to class, didn’t he care? I told him he was fixing to get kicked out. I paid far less when I went to school 10 years ago, and they had to turn the machines off on me at 9.30 pm because I was there 30 minutes after we were supposed to leave! I told him he needed to take advantage of this place.

He ended up being in my other class later and was one of my best students. His GPA is up, he’s fixing to graduate soon, and I’ve lined him up with a job already. He’s one of my 180-degree students, as I like to call them. Sometimes these guys just need someone to believe in them or care about them, so they can believe in themselves. If they see someone cares, some of them start to do their best because they want to make me proud. I see that a lot, and it’s awesome!