John, 53, from Williamstown, New Jersey, is the lead pipefitting instructor at Tulsa Welding School in Jacksonville. John has been at the school for over four years. He actually developed the pipefitting program in 2016 alongside Director of Training, Jack Dulls. John also teaches a welding class.

Thanks for your time, John. When did you first become a pipefitter?

I actually started out as a welder with the United States Navy in December 1985. I went to the naval welding school in San Diego in 1988. I finished my 20 years of service in December 2005.

Thank you for your service, sir. As a kid, what did you want to be when you grew up?

I wanted to go into community service. Every male in my family is either military or police officer. I was leaning towards police officer, but my uncle, who was in the Navy at the time, steered me in that direction. It was a good opportunity because my friends at the time probably weren’t the best, with no defined career ideas. I just needed to get out of there. I took his advice, and my best friend and I took off for the Navy on December 17, 1985. We both stayed in the whole 20 years.

Was welding your job throughout your service in the Navy?

Yes, I was a welder and pipefitter. I fixed everything that had to do with any kind of piping system, or anything that needed to be welded, whether structural or pipe.

Tell us about your career after your retired out of the Navy.

In 2006, I went to work for the local Navy shipyard. I was the pipe foreman at North Florida Shipyards for a few years. Then I moved on to be the senior material planner for BAE Systems in Jacksonville. We built brand new ships that supplied the oil rig platforms. I built three new ships from the ground up. They took about a year and a half each. When they ran out of work, I got laid off. I was high-dollar and they chopped from the top down! But that gave me a great opportunity, because that’s when I noticed Tulsa Welding School needed a pipefitting instructor. 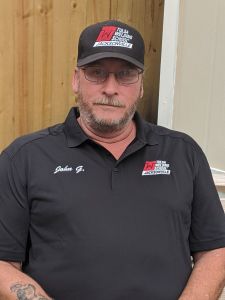 Why did you decide to apply?

As a pipe foreman, I noticed that a lot of pipefitters with experience were closing in on retirement. In our fast-paced world of production and profit, the older guys didn’t have time to teach the younger guys. I looked into the future and thought that in the next five to ten years, we are going to have a bunch of pipefitters who don’t really know a lot.

I met with Jack Dulls, the Director of Training here. When he said he needed a pipefitting program, I told him I could build one! That sold it for me. I could see the need. I thought it would be very successful, and we would create pipefitters who are actually pipefitters. That’s not taking anything away from guys out in the field learning day by day, but this was a way to accelerate that, to get skilled workers into the market. The one question I had to ask myself was, “I have it in my head, but how can I get it out to the student?” That was my biggest dilemma.

Honestly, I like it if I have a student who is struggling. I get to spend some good one-on-one time with them. When they get it, that light comes on, and they just flourish from one project to another. I can say I took someone who knew nothing and taught them a skill that will last them a lifetime. The old saying holds true: “If I give you a fish, you will eat for a day. If I teach you to fish, you will eat for a lifetime.” I think that is the biggest satisfaction for me.

I’m a pretty open book. I guess they won’t know that my fiancée M,elissa and I have been together for 18 years, but are not married! When I’m at work I talk about “my wife” just because it’s easier. We’ve both been divorced before and we don’t want to go down that road again!

I have a daughter from my first marriage, two step-children, and three wonderful grandkids.

I like to build stuff so the job satisfaction was my favorite part. No matter how hard or easy the job may be, the end product is always something to be proud of.

Did you have a favorite tool when you were out in the field?

I don’t think I had a favorite tool, but I can relate to what other guys have said about their bucket. Sometimes you’ve got to walk a couple of football fields to get to the job site, so my bucket had all my tools in it and if I needed to take a break on the job I could sit on it.

I’d play a lot of golf, probably. But I would also find a way to give back. I really value the people who have taught me along the way. I now feel a responsibility as an older adult to pass that wisdom on to the next generation—both my failures and successes.

Jerry Jones, the owner of the Dallas Cowboys. I’ve been a fan since I was 10 years old, and I’d like to ask him some questions about the team. Why would you pick that player? Or why are you spending millions of dollars bringing trouble to the organization!?

I’d go get the grandkids and do something with them. Give mom a break. They are my passion. I dedicate a lot of time to my grandkids. I want them to grow into prominent adults.

Try to get yourself financially ready to attend school. What I mean is this: Know what your budget is before you attend any of our campuses. Know what the cost of living is in Houston, Tulsa, or here in Jacksonville. Do your research. Get your ducks in a row before you set foot on campus. That is huge. Unless you’re local and can live at home, you’ve got to pay rent, maybe utilities, and all that other stuff when you come to school. If you don’t know your budget and don’t have the means to live, then it’s really going to be a struggle.

Is that because of the distraction?

Yes. When you come to school, you want to be able to concentrate on what we’re teaching you. If your mind is elsewhere, worrying about making this month’s rent, that will detract from what we are trying to teach you. You are not going to get the full benefit of what you’re paying for, because your mindset is not where it needs to be. I hate to see a really good student have to drop out of school because they didn’t prepare financially, especially for those coming in at 18 or 19 years old who have never lived away from home.

I would have to say my uncle Richard. He’s the one who talked me into joining the military. That set me on my path to where I am today. If it wasn’t for him, I don’t know, I might have been a police officer, or I might have been something completely different.