Joe, 50, was born in Houston, Texas, but has spent most of his life in Florida, including the past three years as a welding instructor at Tulsa Welding School in Jacksonville. Joe currently teaches Phase 6 (Pipe Welding 1) of the Professional Welder program, which is an introduction to TIG.

Thanks for your time today, Joe. As a kid, what did you want to be when you grew up?

I wanted to be a rock star! That was my ambition. I can play the guitar a little bit, but I’m not that good.

When did you first learn to weld?

I started my welding apprenticeship as a union boilermaker in 1994 and graduated in 1998. So I’ve been welding 26 years.

You were 24 years old in 1994. What did you do after high school before welding?

I was a construction worker, doing anything to pay the bills. I roofed houses, poured concrete, raked yards, painted houses. I wanted to learn how to weld because I was working on old cars, building hot rods. The union told me I could make a lot of money, so I joined up. I found out I could make more money boiler making than making cars! 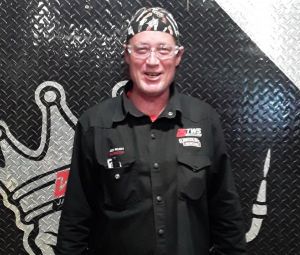 You’ve been at TWS for 3 years, but an instructor for longer.

Correct, since 2007. We didn’t teach year-round in the boilermakers, we just did it when there weren’t any shutdowns going on. As well as running the roads, I was also an instructor. I taught all their classes. I was their welding instructor, apprentice instructor, OSHA instructor, and an instructor for the NCCCO (National Commission for the Certification of Crane Operators).

Why did you decide to join Tulsa Welding School?

I got married five years ago. My wife did not like me being gone for six months at a time, running the roads doing shutdowns. After two years of it, she’d had enough!

Helping students, giving them a way out. They get a whole new skill set and life. I enjoy it, and I like it when they finally get it. They struggle for a minute and when they get it. That makes me feel good.

Why did you decide to go into full-time teaching?

I really enjoy teaching. When I was taught, they really didn’t show us a lot. It was old-school. The old-timers really didn’t want to help you because you were going to take their job. I always said if I ever had the opportunity, I wouldn’t let someone else go through what I went through.

Does that old-timer mentality still exist in the field?

It’s changed a little now. The older generation today realizes that if they teach the younger generation how to do it, they don’t have to do it themselves so much! There is a different mentality nowadays.

With your experience you could have gone anywhere, why TWS?

I’ve called Jacksonville home for 26 years or more. I was president of the local union (199) when it was in Jacksonville and I came here to recruit welders a few times. I knew all about the school.

I’m a pretty open guy. Most people know everything about me! That’s a hard one there. People know I like to fish. I play guitar. They know I’m married. Maybe people won’t know that when I lived in California years ago, I dated a playmate centerfold!

The people. The people made the biggest difference. There’s a whole different breed of character. When people graduated the apprenticeship, they would often eventually go on to become foremen. When I’d go to work, I’d often end up working for my old students. I really enjoyed that. I really did.

My bucket has a cushioned lid, and a strap to make it easy to carry. It’s also got a hole in the side, so on cold days I could plug in an electric blanket, fit it inside my bucket and have a warm seat. It carries my tools, but you’ve got to make it work for you. You’ve got to make your own conditions. That’s what I was always told. If you’re cold, find a way to warm yourself up! You don’t like the way something is going, change it. If you’re not happy with your life, change it. Make your own conditions.

My wife Rebecca and I have been married five years. I have two kids of my own. They are grown. My son and daughter are both in their mid-20s and I have two grandkids, one from each of them. I also have two stepsons. One is 22 and the other is 16 and he is still living at home.

I’d be a professional fisherman. If I didn’t have to pay a mortgage or anything else, I’d just go fishing. I have the St. Johns River right here by my house.

Elvis Presley. He lived a very extensive life. He helped a lot of people out. He was the phenomenon of his time. Just to sit down and talk with him would be phenomenal!

I’d go fishing! I enjoy being on the water. If it’s raining and I can’t go fishing, I’ll play guitar.

It would probably be Carl Ferguson. He was the business manager at the local 199 in Jacksonville. He was my mentor when I was an apprentice. 90% of the stuff I know is probably because he took the time to show me how to do it. He retired seven or eight years ago, but we still talk off and on. If I’ve got something that I don’t know how to do, I still call him.

You are not born knowing! Everything you know, somebody has shown you or taught you. Somebody had to teach me. I’ll teach you. You will struggle with some of the procedures because you don’t know what you’re doing. You don’t know because you’ve never seen it before. You can do anything if someone shows you how. So don’t get frustrated because someone has to show you how. Put your hand up, there really are no stupid questions.