James, 51, from Houston, Texas, is a Senior Welding Instructor and a Pipefitting Instructor at the Tulsa Welding School & Technology Center in Houston. James has been at TWSTC for about a year and a half. He joined before Covid started, then took a brief leave of absence before coming back.

Thanks for your time, James. How long have you been welding?

I’ve been in the welding field since 1987. I was 17. I started at the bottom as a helper and went from there.

So, you went straight into welding out of high school?

Yeah. I worked half days in high school, and I actually left home at 16 years old and lived with a friend of mine and his dad. The only reason I graduated high school is because I had to pay a hundred dollars a month rent, and I couldn’t quit school. If I quit school, I couldn’t stay there. I did half days, got out at noon and then went to work at Mate trailers, and it went from there!

Top line your welding career for us. What’s your experience?

I did a little bit of everything. I’ve been pretty much all-over the United States. I traveled for about 28 years, pretty steady. I’ve been up in Alaska working on the pipeline. The ice road truckers were bringing the stuff up there while I was working. That was cool. I worked on Fort Greely missile defense base. I got to ride on BP’s private jet one time going out from the North Slope oil fields, back to Fairbanks. I worked in oil and gas all over, spent a lot of time in west Texas and south Texas. I worked on two turbine units in Kansas in 2014. What else have I done? I worked in nuclear plants; I worked at a nuclear generating station in California, which is gone now. I worked at ANO nuclear power plant in Arkansas, and at STP, the South Texas Project.

What did you want to be when you were a kid?

I was 13 when I figured I wanted to be a welder. I never had plans to go to college, none of that stuff. I wasn’t that guy. I was always just going to go to work. My dad had an automotive machine shop. So, as soon as we were old enough, we had to go sweep the floor and whatnot. When I was about 13, my dad and I made this birdhouse mailbox together for a customer. Everybody was running over mailboxes at the time. It was probably the only thing we really did together. So, I got to weld a little bit on that, and I guess I was a bug attracted to the light. That’s what sparked it.

What made you go into teaching a couple of years ago?

I was working on a pipeline in Monahans, Texas, in 2019 and my girlfriend was with me at the time—well she’s still with me, we’re married now! We were sitting there on a Sunday, and I said, “What the heck are we doing here? We’ve got a house on Lake Conner, two motorcycles, two boats, and everything’s just sitting there rotting in the garage.” After 28 years of steady traveling, everything’s paid off. So we decided to go home. She went to nursing, and I looked on Indeed.com, punched some buttons, and these guys called me. Here I am, and I love it. I’m used to working 60, 80 hours a week. If I do 35/40 hours, I’m happy! I was talking to my boss about retirement once upon a time, and I said, “I’m almost there.” My idea of retirement is when I can be home, work 40 hours a week, make plenty of money, and not have the stress on life. 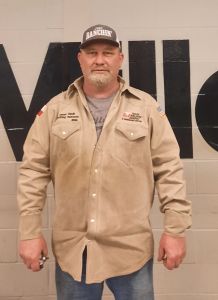 Growing up as fast as I did, going to work and all that, I never really got to work with the younger generation. I was just working. So now it’s just like teaching little brothers and sisters how to work. It’s just something I’ve never experienced. You know, the best students are the ones who have problems. You get the guys and gals who know how to weld right away, and they pick it up quick. Those are good, too, you know. But the ones who struggle, the ones who really need help and a hand up, I can actually help change their life for the better, and that’s kind of neat.

I don’t know. Most people know me pretty well. Let’s see, when I’m off I do leather work, go fishing and play with my grandkids!

Tell us about your family, James.

Tonya and I have been married two years. We got married on Memorial Day so I wouldn’t forget. We were dating for about 15 years. I wanted to make sure she liked me first! I have a daughter from another relationship who’s 30 this year, and I have two stepsons. One of them is welding now, and the other’s an electrician. I also have three grandkids, three boys.

What advice do you have for new students just starting out at TWS?

Make sure you treat it like a job, show up every day. We’re paid to help you and that’s what we’re going to do. But you have to apply yourself. You will get out of this school what you put into it, for sure. And don’t be scared to ask questions. A lot of students will sit there. They don’t want the instructors to mess with them. But I’m here to help you, you know?

One of the biggest things I like to do is share my field experience, life advice if you like. I tell my students once they get out there, “Save your money. It’s happening. You’ve got one chance to make this money and actually hold onto it. From say 27 to 50 years old, that’s your prime. Once you’re done that’s it, you don’t get a chance to do it all again. So, don’t waste it.

Have you learned to spot those people who need help but won’t ask?

Oh yes. Definitely. My skills are coming up. I’m still learning something every day. But you definitely get to learn to read people and learn that everyone needs to be taught just a little bit different than the last. Everybody needs something for sure. Definitely, every day I learn something about how to read people.

If you could choose to have dinner with anyone, alive or dead, who would that be?

I think it would be my grandfather, my mom’s dad. I was close to him growing up. We never ran out of stuff to talk about anyway! We lost him maybe 12 years ago. I saw him before he died. And he said, “You know, I’m glad you came to see me because when I die there won’t be a funeral. I’ll be gone.” And that was pretty much it. Our last conversation. And when he died, there was no funeral, no body, no church service, nothing. He was basically like, “Y’all should have come and seen me when I was alive!” Every time I came back in town, I always made it a point to go over there and see him.

You get an unexpected afternoon off, what would you do with that time?

If it’s before lunch, I’ll grab my wife and we’ll go to lunch. If it’s after lunch, I’ll probably go to the house, grab a fishing pole and a six-pack of beer.

What was your favorite part of the welding industry when you worked in the field for 28 years?

I enjoyed building stuff. We would start a project and there’s nothing on the ground. You get all these drawings and there’s more than one could possibly imagine. You don’t understand how it’s going to work, and then little by little, all these drawings come together, and you got something that’s really unbelievably built. You look back and you think, we made that? Unbelievable. I like building stuff.

What was your favorite tool of the trade when you worked in the field?

Man, that’s kind of a tough one. I liked all my tools. I just hated to lose one. If a tool broke, no problem. If it wore out, no problem. But if I lost one, I was mad as hell because I didn’t want to lose anything. It was like a waste of something good. I worked single hand, just working out of my truck, If you have no tools, you’re worthless, so I think every tool is equally important.

If you could tell anyone “Thank you” for helping you become who you are today who would that be?

That would be my friend Jeff McCormick. When I was about 18, 20, something like that, I rented a little house and Jeff lived down the street. He was a welder and about 10 or 12 years older than me. He was always welding, doing stuff in his garage, welding exotic metals and whatnot. It was the early 90s and just like any other welder at that time I was scratching around to get what I could get. But he took me under his wing and taught me everything he knew. He got a little free labor, and I got some good schooling. He’d be the guy. I just talked to him yesterday as a matter of fact.