Eric Tomlinson, 35, is a welding instructor for the Associate of Occupational Studies in Welding Technology program at the Tulsa campus. Eric has 16 years of experience in welding and welding inspection ,and he has been teaching at Tulsa Welding School since October 2017. A 2002 graduate of Tulsa Welding School himself, Eric currently teaches Welding Inspection and Metallurgy classes.

Thanks for sharing your story, Eric. Tell us a little about yourself.

I was born in Sacramento, California, and I’ve lived there for nine years. I went to high school in West Plains, Missouri, and did some welding in Ag class. I’ve been in Tulsa, OK, since 2001 which is when I enrolled as a student at Tulsa Welding School.

What made you choose welding as a career?

I was going to go into the Army in 2001, but I had a hernia, and they wouldn’t take me. It was going to be six weeks to get the surgery, plus some recovery time, and I figured at 18 years old that three months might as well be a million years. So I decided to do something different. I’d done a little welding in high school and around the farm. There was also good money it; that was a large part of it for sure!

If not for the hernia, your life might have been very different. The world changed in 2001.

You’re absolutely right. I was talking to the Army in August 2001. I never got the surgery and never joined the Army. Two years later, the hernia healed itself. I clearly supposed to be over there.

After graduating welding school, what was your career like?

After graduation, I worked at a manufacturing shop here in Tulsa for about three years. I was lead man and had a crew of 23 guys. Then I took a pipe welding job for a couple of years before I got into quality control, doing weld inspections. I got my CWI [Certified Welding Inspector] license in 2009. Before coming here, I owned an industrial staffing company. I had offices in Tulsa, Houston and Mississippi. We’d test welders, fitters, electricians and instrument guys and place them with companies. 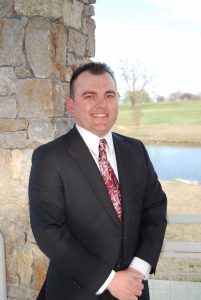 What made you decide to go into teaching last year?

When I shut my business down, I wasn’t sure what I was going to do. So I took a few months off, relaxed and did some self-evaluation. Then I took a contract weld inspection job at a plastics plant in south Texas. I did inspections down there for six months and lived in my motor home. I realized that I’d been chasing money my entire life and it hadn’t made me happy. Serving people is far more important to me than money.

Why did you choose to come back to Tulsa Welding School for your first teaching job?

I’d been home from Texas for maybe a month, and a job opening came up as an instructor. I thought it would be a perfect fit. Everything about this place made sense—just the way the class is set up, as far as the curriculum, the different phases. The information in each phase is almost tailored to what I’ve done in my career.

Sharing my experiences and knowledge. I really enjoy sharing some of the things I’ve done and tying that back in to our curriculum here.

During your varied welding career, which job has given you the most satisfaction?

Can I say this one? Definitely teaching.

When we moved to Missouri, my dad bought a cattle farm, so I grew up wanting be a veterinarian. But working around the farm and seeing lots of animals having surgeries over the years kind of changed my mind.

It’s something that just came up, and I’m hoping a lot more people will know about it in another month! I’m running for the state senate of Oklahoma, District 18, in the June 26 primary, and hopefully the November election!

Wow! Good luck! What made you decide to run for office?

For the last 10 years I’d thought about running at some point, but I figured it would be another 20 years or so before it happened. But the recent situation here in Oklahoma—the teacher walk-out, improper funding for schools, the largest tax in Oklahoma history that passed recently and the way the legislators are dealing with it—it really frustrated me, so I started digging into it. I discovered the incumbent senator, the seat I’m running for, authored the bill that passed the highest tax in Oklahoma history. I think I have a shot. We will see. I’ve had a lot of supporters come out already and it spiraled from there.

Tell us a little about your family.

My wife Crystal and I have been married for 17 years. We have a 15-year-old son and a 9-year-old daughter.

I have a tie: George Washington and Jesus. Jesus, whether you believe in religion/God or not, is probably the most influential person to ever live on the planet, and I’ve read a lot of books about George Washington. He’s probably one of the bravest individuals I’ve ever heard of.

I have a lot of hobbies, from scuba diving to golf, but lately I’d probably go practice shooting. I’ve recently been working on getting into long-range shooting matches: 600 yards or more.

As a welding inspector, the most important tool is a good, quality flashlight!

If you weren’t a teacher, what would you be?

A state senator of Oklahoma!

My wife for always supporting me on my crazy adventures, and my dad Brian; he’s the one who instilled my work ethic.

Intelligence is only a small part of your success. Drive and motivation are the two most important things.