Eric, 30, is a lead welding instructor at our Jacksonville campus. Born in Pennsville, New Jersey, Eric moved to Florida two years ago. He joined Tulsa Welding School shortly after and was recently promoted to lead instructor. He currently teaches Phase 10, the final phase of the program.

Thanks for your time, Eric. What brought you to Florida in 2017?

I came down for warmer weather. Most of the plants I worked at—refineries, nuclear power stations—involved working outside up north. I was just done with the cold. I wanted the beach and heat!

What age did you start welding?

I started welding at 16. I went to a vocational school in New Jersey. I did welding science; I finished the program in my junior year, so my senior year I went to work release. I went to high school from 8 a.m. to 10 a.m., then worked as a certified structural welder at a crane company from 11 a.m. to 6 p.m.

Talk us through your welding career.

I went to a commercial diving academy for underwater welding after high school. I worked offshore in the Gulf of Mexico for four years. I’m certified for underwater welding and welding pipe. I stayed really busy. I could stay out on the rigs as a topside pipe welder, or I could go as a diver doing underwater construction. I had great job security. I lived in New Orleans, in addition to many other southern states at the time.

Sounds like you made good money with those skills.

My first year out of the diving academy I made $89,000 in my first full year of work, so there is plenty of money to be made, and that was more than 10 years ago when I was 19. I would test with multiple companies and then go with the one with the better money and the longer jobs. I could take my pick.

It was. After I was done with the offshore lifestyle, I went back up north and did shutdown/turnaround work at nuclear plants, refineries and power generating stations. Then I went to work for a company called Dresser-Rand. I was a gas and steam turbine tech.

When I got to Florida I took a job as a welding foreman building a UPS plant in Jacksonville. When that contract finished, they sent me to another job in Mississippi. That’s when I met a TWS graduate Clint , one of the sharper guys I worked with in the crews. At the end of the contract, Clint suggested I come with him to Tulsa Welding School in Jacksonville and meet the instructors. I decided, why not?

Why give up working in the field to become an instructor?

My younger brother—God rest his soul—was murdered five years ago. After that experience, I really longed for the sensation of helping people. I couldn’t help my brother; it wore me down. I wanted to be more interactive with people. With welding, most of my time, my shield was down, and I didn’t associate with too many people. After that tragedy, I wanted to change my life. I wanted a different direction, to help as many people as I could get their life on track, rather than block people out.

Our condolences for your loss. That’s a big career decision, given the money you were making.

The gratification I get from meeting my students’ parents, or when they send me a photo of their new house, truck, a new life—that kind of stuff is worth more to me now than any amount of money I could make. It’s so rewarding to see our students be successful. Hands down, that’s why I’m here. 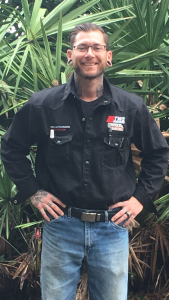 Has teaching matched your expectations?

It has exceeded my expectations. In just seven months, I can teach someone as young as 19 the skills they need to make $80,000 to $100,000 a year at a nuclear facility. I’m happy for them, and I get a lot from them. I plan on getting my CWI [certified welding inspector], but I have no ambition to leave here. The positive feeling and gratification I get when I leave every day cannot be beaten.

I read a lot of books. I started to while working offshore.

My wife Charlotte and I have been married for just over two years. We’ve been together four years, but we met in Cancun when we were 18. No kids yet, but we do have a 10-year-old pit bull.

I’ve fought BJJ, boxing and Thai boxing since I was a kid. I knew I was either going to be a welder and commercial diver or stick with the fighting and pursue a career. I didn’t want to have to live at the gym until one day I maybe made it big. I wanted more security. I wanted to make my own money. With welding, if you have the skills and mindset, you can go to any state and make a damn good living.

I’d be a traveling food journalist. Remember Anthony Bourdain on CNN? I thought extremely highly of that man. He had the best job in the world! I like to cook, and I like to travel. That would be a cool job.

What was the favorite part of your job out in the field?

I enjoyed the uncertainty of what the job site was going to be like when you got there. I like problem solving. When I get to a job site, it’s like solving a puzzle. How am I going to get this done efficiently, fast and effectively? It was exciting.

It would have to be my younger brother, Dustin. He was two days shy of his 23rd birthday when he was shot in the back by gang members while training at night for a triathlon.

What would you do with an unexpected evening off?

I would go home, pick up my wife, our dog, and go to the beach and then get some drinks and food.

I would have to say my old foreman Ed Powers from my time at Dresser-Rand. Ed is a jack of all trades; he could be a diesel mechanic, a turbine tech, a master machinist, a certified welder. He had it all and I looked up to him. He was the one man who could literally do anyone else’s job, and I wanted to be like him. He was one of the guys who greatly helped me along my way. He didn’t have to help me. He wanted to because he saw I wanted to learn. The man didn’t stop, so I adopted his work ethic, too.

Attendance—showing up every day—and asking questions. Those are the two biggest factors. If you don’t know, you need to ask. If you ask questions and have great attendance—and I mean time under the hood welding—you will, without a doubt, be employable when you get out of school.

Chat With Us
Apply Now