Dean, 72, from Henrietta, Oklahoma, is celebrating 30 years at Tulsa Welding School this year. He is one of our most experienced welding instructors. Dean is himself a graduate of Tulsa Welding School, having gone through a program in the early 1980s.

Thanks for sharing your story, Dean. Please outline your career for us.

I’ve been in the industry about 54 years—24 years on the road and 30 years here. I graduated high school in May orJune 1965. I started out X-raying pipe and following the welders in August 1965. That’s when I started on the pipeline. I worked over most of the United States, I’ve worked offshore, and I was in Alaska for 10 years.

I actually started learning how to weld in 1968. I didn’t really weld on the job, but I worked around welders. They got me started, and it went from there. I went through Tulsa Welding School in the early 80s. I started working here in 1989 and have been here ever since.

How did you get the job that set you on this path?

Our neighbor was into X-ray, so when I graduated high school, that’s how I got started. I didn’t like traveling at first. We had a big family and did a lot of family stuff. But after I traveled for a while, I really liked it, and the money was good. It doesn’t seem that good now; I started out at $1.25 an hour and a $6 per diem, but it was more money than I had ever seen.

Talk to us about X-raying. How were you qualified for that when didn’t know how to weld?

I attended 40 hours of safety about working with radiation, then I helped a technician for about six months, learning how to read film and stuff like that before I actually broke out. Then a guy left. I was on the job and had some experience reading film, so they made me a technician. I supervised a couple of big pipeline jobs later on in Oregon and Washington.

When you went into teaching, did you think you would still be here 30 years later?

I thought it was a temporary thing. But I enjoy it. I like it.

When you get someone who doesn’t know much and then they get it. You watch their confidence level come up. I like working with young people, and I think it keeps me young! A lot of these kids are the same age as my grandkids. I know their capabilities because I’ve got two grandsons who are pipelining and doing really well. I know these guys could do well, too, if they pay attention and get after it.

I grew up on a farm and we were pretty poor. We had cattle, so I guess I thought I’d have a big ranch with cattle and horses. I’ve still got cattle, but it’s not a big ranch.

When I leave school, I’m kind of a hermit. I like to work around my place. I have 12 grandkids; people might not know that. I had lunch with one of my grandsons yesterday. He’s 20 and working the pipeline. He’s taking home about $2500 to $3000 a week, and I still had to buy lunch. That hasn’t changed! 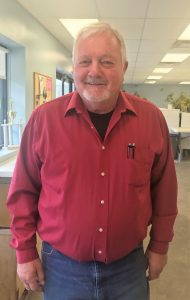 Probably John Wayne. He was a pretty good cowboy. He seemed like he had a lot of good values. When I saw him on TV, he always had some pretty good things to say.

I’d probably build fence or whatever I needed to do around my place. I enjoy what I do, it keeps me busy, it keeps me young.

I didn’t have a favorite tool, so probably my experience. I saw myself as a commodity more than a person. I was able to get into X-ray, then welding, and I did a little bit of inspection, all based on my experience.

I enjoyed pipeline more than anything. We worked hard all day, and I enjoyed making money. If I was with a good crew, it could be fun. Most of my years in Alaska were up “on the slope,” as they call northern Alaska. It was pretty cold, so I can’t say I really enjoyed that, but it was an adventure. It was strange for a cowboy from Oklahoma to not see cows or horses. We saw arctic foxes, maybe a caribou in the spring.

If you weren’t a teacher, what would you do?

I like ranching. I grew up around it. It’s kind of my heritage, and I really do enjoy it. I love horses, but I make more money with my cattle. I sold four head on Monday; they weighed between 750 and 800lbs and they brought $825 a piece. It’s not great money, but it fills in the gaps. I’ve got about 80 acres. I used to lease quite a bit more. I run about 25 head. I used to run 75 to 80, but I’ve kind of slowed down and cut back a little bit. The grandkids help me, but I pretty much manage it myself.

My dad was pretty good about guiding me in different directions. As far as work goes, the last few years I’ve been very appreciative of Tulsa Welding School. I’ve seen three owners in my time, but Mr. Adams—the owner when I started in 1989—was a good man. He’d write commendations for me. I made a one-handed guy a band to put on his wrist so he could TIG. I got a commendation. I was pretty proud of that.

How long do you think you’ll keep teaching?

As long as I’m healthy, I’ll keep doing this. I was a pretty good welder in my day, and I have a lot of knowledge here at the school. Even though my eyes aren’t as great as they were, and my hands shake a little more, it doesn’t matter how well I can weld today. What matters is how well students can learn from me. I tell them my weld doesn’t look very good, but it still looks better than yours, so do it again!

If you ain’t burning, you ain’t learning! You’ve got to burn those rods. The more they burn, the more consistent they will be with their arc length and travel speed. We talk about that all the time. I go in their booth and criticize them, but also try to give them a positive before I leave, that they’re doing this or that right.

Right now, I’m teaching phase one. I really stress to the new students that we’ve got to see progress every day, especially that first week. We want to see that we are making headway. I started a class yesterday, and there were several students in there who are looking pretty good.