Collin, 30, is a pipe welding and pipefitting instructor at our Jacksonville campus. Born in Gainesville, Florida, but raised in Ohio, Collin has been with Tulsa Welding School a little over a year. He started welding at the age of 15.

Thanks for your time today, Collin. As a kid, what did you want to be when you grew up?

I wanted to join the military when I was younger, and I did. I spent five years in the U.S. Navy. Three years in counter narco-terrorist operations in South America. That’s just a fancy way of saying we did counter drug ops. Colombia, Honduras, Guatemala, Bolivia—I’ve been all through there.

Thank you for your service. When did you first learn to weld?

I went to a vocational high school, so I spent two years learning welding there when I was about 15. I started working at a machine shop when I was 12 or 13. I got six brothers and a sister. My mother raised us, but I started working full-time about 11 or 12 years old. I’d go to school and then go to work.

Did you join the Navy straight out of high school?

No. When I came out of high school, I welded with the millwrights for a year before I joined the Navy. I wanted to take some time before I went in—have fun, be an adult for a bit before I signed it all back over. In that year I built assembly lines for Honda, Toyota, Whirlpool—assembly lines for their manufacturing plants. We’d build them out and weld the conveyor systems.

Did you weld in the Navy?

Yes, that was my main job. I signed up to be a Hull Technician, a pipe welder, really. I welded on Navy ships. We repaired high pressure steam lines on ships, submarines and carriers. I went to two Navy welding schools, including going through an Advanced Nuclear Pipe Welding School. We would do weld repairs on steam lines out at sea. My main job was a welder, but when I was with the Riverines I wasn’t really welding much pipe, I was mainly scab patching the bullet holes we’d get in the boat.

What did you do when you came out of the Navy?

I’ve built energy windmill towers. I spent four or five years welding up in Alaska. I’ve welded all the boats you see on The Deadliest Catch TV show! I was the night shift weld foreman of the largest shipyard in Alaska for over a year. I did pipe, structural, new construction and repair. 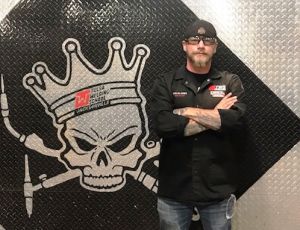 Why did you decide to become an instructor at Tulsa Welding School?

Since getting out of the military, I got promoted to lead man or foreman on most jobs I was on. I’d usually end up teaching junior guys how to weld so they could get more proficient. That made my job easier as the boss because I wouldn’t have to hear headaches about cracked welds from other guys having to fix them. I really enjoyed teaching those junior guys. I could take people with no experience and I’d have them welding pretty well inside of a few weeks.

I hate to go with the cliché, but it’s the students. It’s awesome when you have a student excited to tell you they’ve gotten their first job! “Thank you for teaching me how to TIG weld. I’ve got a job now!” It’s amazing. I just love hearing about people getting work. It’s terrible seeing people not working, or people having to do work they don’t like for bad pay because they don’t have a skilled trade.

How is your relationship with your students?

I get very good responses from students. I treat it like a job site. I’m relaxed. I talk to them like adults. I take my time and show them everything I know. I tell stories about things I did in the past that relate to what they’re doing in the booth. Whatever mistakes they’re making in the booth I’ve made at some point in my career; that’s how I’ve gotten to where I’m at. I always find a way to relate something knuckleheaded I did on the job to the mistakes they’re making. They get a laugh out of it and learn from their mistakes. Everybody’s human. The stories stick in their heads and they learn from it.

I’m pretty much an open book. I’m a straightforward kind of guy. I don’t have any skeletons!

I’ve had the same five-pound mini sledge, a hammer, for about 12 years now. That’s pretty good because no tool lasts that long when you’re on the road. If it didn’t want to fit, it was going to fit with that.

Divorced, no kids yet.

You get to meet new people. Honestly a lot of people in the trades are just good people. Most welders are pretty decent folks. I loved the work. It’s good work, and you get to travel.

I’d still be a pipe welder! Being a pipe welder has taken me to every corner of this earth. Most things people dream of doing, I’ve already done. All because I’ve worked different pipe welding jobs.

You have your own business, in addition to being a teacher. I assume that’s a welding business?

No, everybody assumes that, but I own a small business that does guided horseback riding tours out here in Florida. I’ve got a bunch of horses. We take people riding on the beach or on trail rides. You can look up Southern Shore & Trails on Facebook if you like!

This is tough. My grandfather, Edward Hutchinson, in a heartbeat. I lost him about a year ago. I would thank him one more time for every life lesson he taught me. I use every single one. I can’t thank him enough for all the extra time he spent with me.

I’m going straight to the range, saddling up my horses, and going for a ride.

That would be my grandpa and my mother. I learned firsthand from my mother what hard work was. I figure if she can raise six kids on her own, there isn’t a damn thing I can’t do. I’m always very understanding and very fair, but as far as excuses, I really don’t tolerate too many because I’ve seen firsthand what hard work does and what you get out of it.

Stay in your booth, keep welding and ask questions. I can tell you how to do something until I’m blue in the face, but you have to do it so much that muscle memory takes over. It’s just repetition—burning rod after rod after rod. These students who come out and get the good jobs put in the hard work. These guys and girls are in the booth all day. I’ve got a lot of respect for them. Most apprenticeships are four years long to become a pipe welder. These guys are doing it in seven months.