Thanks for your time, Christian. Talk us through your welding career.

I’ve been welding for about eleven years, but eight years professionally after I graduated Tulsa Welding School here in Jacksonville. My first year out of school I did mostly shipyard work. I built center consoles for tugboats that the shipyard owned. That was aluminum work. From there, I went to work for what is now Baker Hughes (it used to be GE) doing oil and gas work and focusing on their nuclear side, where they provided a lot of valves for nuclear power plants. I did work for what we called the Shin-kori plant in Japan, I’m not sure if that’s still the name anymore. We did some work for India and their boiler regulation. They then sent me to Colorado where I got into the specialty field of robotic welding. I had to learn how to program the robot and control it from itself.

From there I did a lot of exotic materials work, heavy industrial stuff: oil and gas, nuclear geothermal valves, valves for boiler systems, including the valves for the building in which we had to build a boiler in to test those valves! Then I did an internal transfer (within GE) to their Aviation division to switch up my skillset. I worked on parts for GE Aviation, building mission components for jet engines, mostly on the military side, but I did a lot of commercial work as well. They also did work for SpaceX and NASA. I also had the opportunity to work on parts for Air Force One, which was pretty cool.

You packed a lot into eight years?

Yeah, I wanted to get the whole experience of what was out there.

When you worked on Air Force One, did you need a specific security clearance for that?

No, that was actually a pretty funny story. I can’t disclose what parts or where they were going, but it was just a man in a black suit who carried the part in a box. It’s exactly how you think it is: Men in Black-style with a little American flag on his lapel. He handed me the part, sat there while I welded it and then took it away when I was done. That was pretty much it.

Interesting! What made you decide to go into teaching last year?

A career change. The aviation portion was kind of sedentary, and I just wanted to invigorate myself and try to learn something new. I’ve always had a fondness of trying to explain my craft to people. And, going back to the school where I learned to weld in 2014 just seemed to make sense at the time.

Thinking back on it, I wanted to be an astronaut. I went to space camp a couple times as a kid and that really drew my interest. I moved to Jacksonville as a kid, so we weren’t too far from the Space Coast.

I guess the discovery! I taught the first phase for a while—Welding Fundamentals—and it’s amazing to see people go from never having even thought about welding to being able to make competent welds within the span of even a week. I mean that first part of the program is five weeks, but by the end of the first week, most of them are getting it down. It’s pretty amazing. 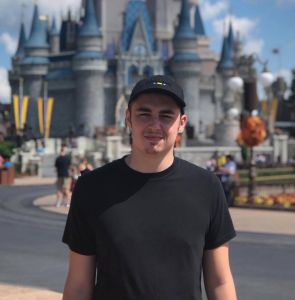 You’re a young man. Will you stay in education or go back in the field for a bigger paycheck?

I think this is it for a while. It’s a comfortable job. I like it. I enjoy coming in every day; I usually come in uplifted and happy. I’m not driven by money. I  pick up a little side work from people who I’ve worked with previously, but other than that, this job pays well enough for us to stay comfortable.

Tell us a little about your home life, your family.

My girlfriend and I have been together eight years; we met at an old job. We don’t have any kids.

I don’t know. I like cars. I’m a gearhead, I guess. I like working on project cars that I’ve sunk way too much money into. Although I don’t have a project at the moment. We were looking to buy a house eventually, so all that had to go to make room!

Probably Elon Musk. I’d like to pick his brain over dinner. His views of life and his ambition to just create is interesting. There aren’t too many people like that. Granted, you’ve got to have the money to back it up obviously, but if the drive is not there, then the money doesn’t matter.

You did a lot of different things, but what work did you enjoy most when out in the field?

Probably the nuclear side of the work because it’s so strict and structured. It keeps you on track.

I don’t know. Maybe go to the beach or just go for a drive!

I’ve seen it with almost everybody that’s come through here. When you get frustrated, you’ve just got to take a deep breath and pause for a second. Think about what’s going on, and then get back into it. Think about what you’ve been guided to do, and just take a minute. Take it all in, and don’t stress about it. It gets easier the more time you put in.

I actually still have my grinder that I got from Tulsa Welding School when I was a student here. They gave it to me in 2014, and it’s still going strong. It’s been on every job with me, and luckily it hasn’t been stolen or lost because it still kicks like a horse every day.

My mother, Catherine. she’s been just encouraging the whole way, and she is always proud of what I do.