John, 27, from Jacksonville, Florida, is a Welding Instructor at Tulsa Welding School, Jacksonville campus.  A TWS graduate himself, John joined as an instructor six months ago. He currently teaches the final phase of the Professional Welder program – the Welding Capstone, phase 125.

Thanks for your time, John. Talk us through your welding career.

I graduated from Tulsa Welding School here in Jacksonville in July 2015. After graduating, I got a job at Kaman Aerospace welding aluminum helicopter frames for the Bell AH-1Z Viper, which is a Marine Corps attack helicopter. I took the weld test here at Tulsa–shoutout to Cheri Rich in Career Services for helping me get that opportunity! I welded all the canopy frames, the gunner doors, and the pilot doors.

That’s a pretty good job to get right out of school! Where did you go from there?

I did that for 2½ years, but my goal from day one at Tulsa was to weld for SpaceX. My experience at Kaman was definitely a good start in the aviation/aerospace field. From there, to build my skills, I got a job at GE Aviation, also here in Jacksonville, welding jet engine sub-assemblies. I got certified to weld on Inconel which is something SpaceX had told me I’d be welding on. I was at GE Aviation for just under a year before I got flown out to SpaceX headquarters in Los Angeles, California, where I started in January 2019.

Having landed your dream job at SpaceX, what brought you back to Florida?

I was there almost three years; I moved back because of family. Honestly I was homesick; my wife got pregnant with our first child, and we wanted to be back here in Jacksonville, closer to family.

Was three years with SpaceX enough to have lived the dream or was it difficult to leave?

I was torn to leave, but my dream at SpaceX was to build parts on the first spacecraft to take man to Mars. I wanted to play a part in literally putting man on Mars. Unfortunately, I never quite got to do that. First, I was in Los Angeles for about a year and a half; I built parts on all the Crew Dragons spacecraft that we’ve seen launch NASA astronauts to the ISS over the last couple of years. I worked on those propulsion systems.

I then moved to south Texas with SpaceX for the start of the Starship program. That’s the spacecraft that will eventually put man on Mars. I started working on Starship SN1, all the way to SN20, and SN20 hasn’t launched yet. I’ve worked on propulsion systems for all of them. So I did get to start that program in the propulsion shop and experience it all. We set the tone for the future of the program, but I didn’t get to actually put man on Mars. I did everything else I wanted to do at SpaceX. I got to travel the country and experience all kinds of cool stuff.

Who knows how long it’ll take to get that man on Mars? Your kids may be in college by then!

Exactly. It could be another 10 years. But I got to experience it all for a few years. I even got a dragon tattoo along the way! Now I’m back home with my family, and I’m teaching the next generation. 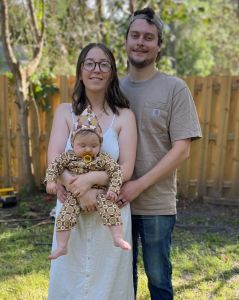 I wanted to come back to where I learned to weld, to share my knowledge and experiences, to help other aspirational welders get their dream jobs. That’s why I really like teaching the final phase of the program.

I like helping the graduates, or those about to graduate, find jobs by encouraging them to seek out what they’re looking for, discover what they want from their welding careers. I then try to give them a push in that direction. I’ve lived my dream job, and if they have a dream, I try to help them go for it.

Another thing I really like is when a student comes to me because they’re struggling with something. When I’m then able to break it down in a certain way that just clicks with them, that’s a really good feeling. I don’t like seeing students struggle, but when I can help them find a way to get it, that’s really something.

From preschool to about 9th or 10th grade in high school, I wanted to be a doctor. Then I realized it required a hundred years of college!

Tell us a little about your home life, your family.

My wife Falen and I have been together going on three years. We’ve been married over a year. Our daughter, Ahpa Fae, just turned seven months. We’re working on more kids. We’d like a big family.

We probably know the answer here, but what work did you enjoy most when out in the field?

It was definitely working at SpaceX. Specifically, putting man into space on the Crew Dragon spacecraft and the comradery that I had with my team while working on the Dragon program.

You’re still a young man. Would you consider going back to SpaceX?

I’m not sure. I would love to go back. The only way I was able to leave was by telling myself that I would go back one day. There is a SpaceX location two and a half hours south in Cape Canaveral. I was actually offered a position there when I told them was leaving Texas. But I was so homesick that even two and a half hours was too far away. So, I planned on going back, but now I really love teaching. There’s a better work-life balance here too. SpaceX is the special forces of the industry; we worked crazy hours, but now with a family, I’m not sure what the future holds. But I’d say I’m probably either going to retire at Tulsa Welding School or SpaceX.

I’d go home, pick up my wife and daughter, and take them out for some kind of activity adventure and a nice dinner, then go back home and relax.

Go to school every single day. Arrive on time, stay late, ask a lot of questions and you can’t go wrong.

Actually, it’s nothing crazy, just a pair of digital calipers. I’d use them for measuring gaps and measuring to cut or trim tubing and pipes. I would also use it as a scribe. Say I needed to take a quarter inch off of a pipe. You set it right to 0.250 and lock it in. Hold it on the edge, on the very tip of the pipe, and then scratch that right in there at the quarter inch point perfectly.

My mom, Celena. When my parents split, we were with her most of the time. She was a single mom with two kids, and she just worked her ass off. She started working minimum wage in the IT department for a hospital, and now she is making six figures as a Senior Systems Analyst for St. Vincent’s Hospital. She’s one of the only people in her field at her level to not have a degree. Seeing her hard work, seeing her set a goal, face all those odds, make it through and succeed…that’s what set me up to do the same