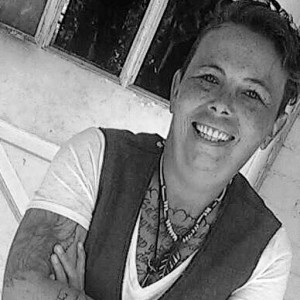 Thanks for your time, Christal. Is Tulsa your first teaching job?

No, I also taught on Fort Riley in Kansas. I taught anything from welding, to cutting, to blueprints – basically what I’m doing now. I taught there for about three years.

When did you start welding?

I started when I first came to Tulsa Welding School in 2002. I cleaned carpets for a living before I became a welder. I lived in Illinois at the time, and I was sitting at the house late one night when a TV commercial for Tulsa came on. I thought it looked really exciting and something I’d enjoy. I called the school the next morning, and a week and a half later I moved from Illinois to Tulsa. I started school a couple of weeks after that. It sounds ridiculous, but that’s normally how I do things. If I’m going to jump, I dive right in and get going on something new, something different.

Were you thinking of welding as a career or just looking for a change?

Honestly, it was just something different, somewhere different. Lord knows I had no idea what I was doing when I came to the school! It was exciting to put two pieces of metal together. It was something that I wasn’t afraid to go and do. The thought that I could get hurt, that I could get burned – I threw caution to the wind on all of that. I had very understanding instructors, and it was a lot of fun.

What did you do after graduating Tulsa Welding School?

I went to work for L3 Communications, a contractor for the government, here in Tulsa as a structural welder. They build generators and conductors for the Navy and the Marines. I was there for about two years. Then I went to work for Cherokee International. They built staircases, handrails, and stadium seating. I Welded TIG on aluminum and stainless steel there for about seven months.

After that I went to visit my dad in Illinois, and someone mentioned the Boilermakers’ Union. That sounded exciting so I went and talked to a couple of people who told me what I needed to do. I applied, signed their paperwork, and after rigorous initiations, trial and error, and heartbreak, I finally got my apprenticeship papers to join the union. That’s a very big deal, especially being a woman.

I started work at the local 363. The first day I pulled up to a power plant it looked like the Titanic. It was so big, so intimidating, just huge. I thought, “What have I got myself into? I don’t know the first thing about a boiler or how it works…”  But as usual I said to myself, “Let’s go do it and see what happens!” The next year, 2007, I moved again and continued my Boilermaker apprenticeship in Kansas City, KS, until I completed it in March 2010. That’s when I first went into teaching.

So why did you want to go into teaching?

It wasn’t something I’d necessarily decided I wanted to do. My sister was stationed on Fort Riley in Kansas and told me they were looking for a welding instructor. She thought I had all the necessary credentials, so she suggested I go up there, apply and see what I think. I honestly thought – “Teaching? I can barely talk to journeyman at this time,” but I thought I’d try it…so just like going to welding school eight years before, I closed my eyes and jumped! I taught active and retired military personnel there.

Why did you choose to come back to Tulsa Welding School to teach?

We actually moved from Kansas to Wisconsin in 2013, but the weather just got really nasty. My family wasn’t used to so much snow. We made a pact that if it snowed on my birthday in late April then we’d move back to Oklahoma. Sure enough it happened. Wisconsin got a blizzard on my birthday so we went back to Tulsa in 2014. I worked a job for a couple of years, but my family wanted me home more. I’d been on the road the majority of my career.

I saw an ad in the paper that Tulsa Welding School was looking for an instructor. The guy that took my application was one of my old instructors, so he set me up with a weld test. I got called for an interview, and honestly, I was a nervous wreck! Most of the people there were people who’d taught me. I was so nervous that I left thinking I’d bombed it. I got back to my car and thought I’ll just have to go back on the road to provide for my family. But before I even got my car started, they called and asked me to come back in. I honestly thought I’d forgotten some paperwork or something, and they offered me the job. I thought, “You’ve got to be kidding me!” It was the most satisfying and rewarding thing I’ve ever done.

Why were you so nervous?

I’d never been nervous about taking a weld test or interviewing for a job in my life; this one was different. If butterflies had flown out of my mouth at some point, it wouldn’t have surprised me! It felt like somebody had taken my gut and wrenched it! What it comes down to, I guess, is that I really wanted the job. I knew deep down that I could do it. It was just proving to them that I could do it and do it well.

I get to share knowledge, stories, and my perspective of how I was taught to do things, especially out in the field. There’s a huge difference being in a shop and being in the field, and I have knowledge of both. I worked very hard to get where I am today, so the opportunity to pass knowledge on is very rewarding.

As a child, what did you want to do when you grew up?

I actually wanted to be a fireman. It was the danger factor I think; I’m an adrenalin junkie! I guess I’m still working with fire anyhow!

Thinking back to your time as a welder, what was your favorite part of the job?

The sense of being part of a team, and the satisfaction of stepping back and looking at what I helped build. There’s a satisfaction of knowing that everyone worked really hard together to get the job done on time. That’s something I try to carry through to students at school. Yes, welding is an individual thing, but there has to be the team part. If you work together, you may get a different understanding of something.

Wow, I’ve never ever been asked that. Nine times out of ten, I’m an open book. I guess I’d say that I look tougher than I am. I’m all of 5’2″, maybe 5’3″, but I’m covered in tattoos. I have sleeves; my chest is done; my back is done. Most students, looking at me, think I’m very intimidating, but I’ve been where they are and I’m really very understanding. My heart is not as cold as they perceive it to be!

Please tell us about your family.

I’ve been married to Cassidy for 15 years. We have an 18 year old son Zachary. Biologically, he is Cassidy’s son, but he’s also been mine since he was five.

What’s the best piece of advice you give to new students just starting out?

Don’t let anything get in the way of something you truly want to do. If you really want it, go for it; don’t be scared of it. We only get one chance of being happy in your life, so live it to its fullest. Know that everybody in that school has probably been scared to start something new at some point.

I’d have a shop where I could build a lot of different things. Maybe just use my skills to help people who needed it. I’d forge a lot of things.

A C-clamp. You can put it anywhere and brace yourself with it, or move around hot metal, or grind with it. I could not live without a C-clamp.

Maya Angelou, the poet and civil rights activist. She had such a wonderful outlook on life and an understanding of how humans interact with each other.

You get an unexpected afternoon to yourself. What would you do with that time?

I’d probably go for a run in the woods, at least a few miles, then come back and gather up all my family and hang out! We’d sit round a table drinking coffee and talk about how their day was, shoot the breeze about life in general…and about what kind of adventure comes next.

If you were to tell one person, “Thank You”, who would it be, and what did they do?